The origins of the muscles of facial expression are on the surface of the skull (remember, the origin of a muscle does not move). The insertions of these muscles have fibers intertwined with connective tissue and the dermis of the skin. Because the muscles insert in the skin rather than on bone, when they contract, the skin moves to create facial expression ([link]). 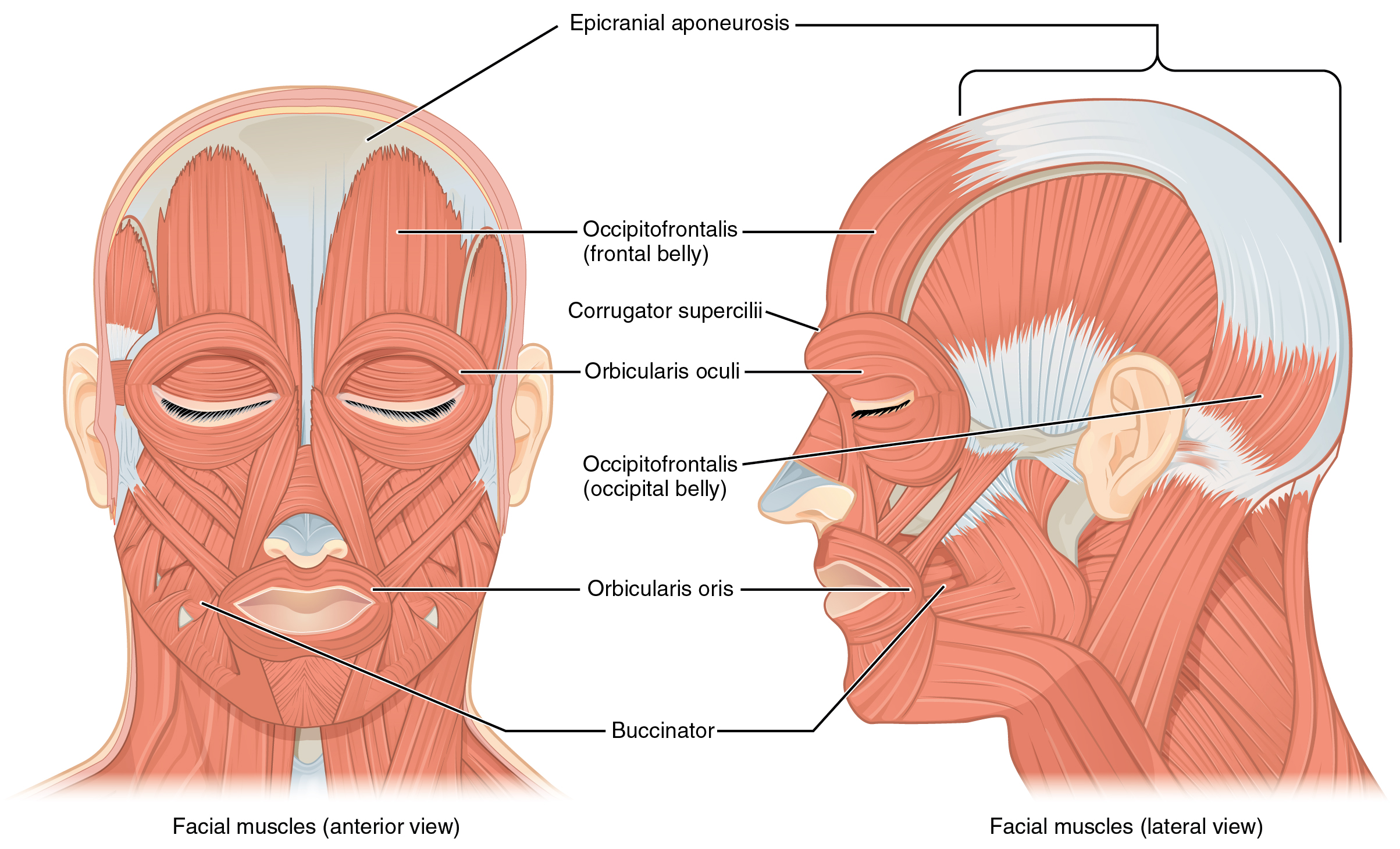 The orbicularis oris is a circular muscle that moves the lips, and the orbicularis oculi is a circular muscle that closes the eye. The occipitofrontalis muscle moves up the scalp and eyebrows. The muscle has a frontal belly and an occipital (near the occipital bone on the posterior part of the skull) belly. In other words, there is a muscle on the forehead (frontalis) and one on the back of the head (occipitalis), but there is no muscle across the top of the head. Instead, the two bellies are connected by a broad tendon called the epicranial aponeurosis, or galea aponeurosis (galea = “apple”). The physicians originally studying human anatomy thought the skull looked like an apple.

A large portion of the face is composed of the buccinator muscle, which compresses the cheek. This muscle allows you to whistle, blow, and suck; and it contributes to the action of chewing. There are several small facial muscles, one of which is the corrugator supercilii, which is the prime mover of the eyebrows. Place your finger on your eyebrows at the point of the bridge of the nose. Raise your eyebrows as if you were surprised and lower your eyebrows as if you were frowning. With these movements, you can feel the action of the corrugator supercilli. Additional muscles of facial expression are presented in [link]. 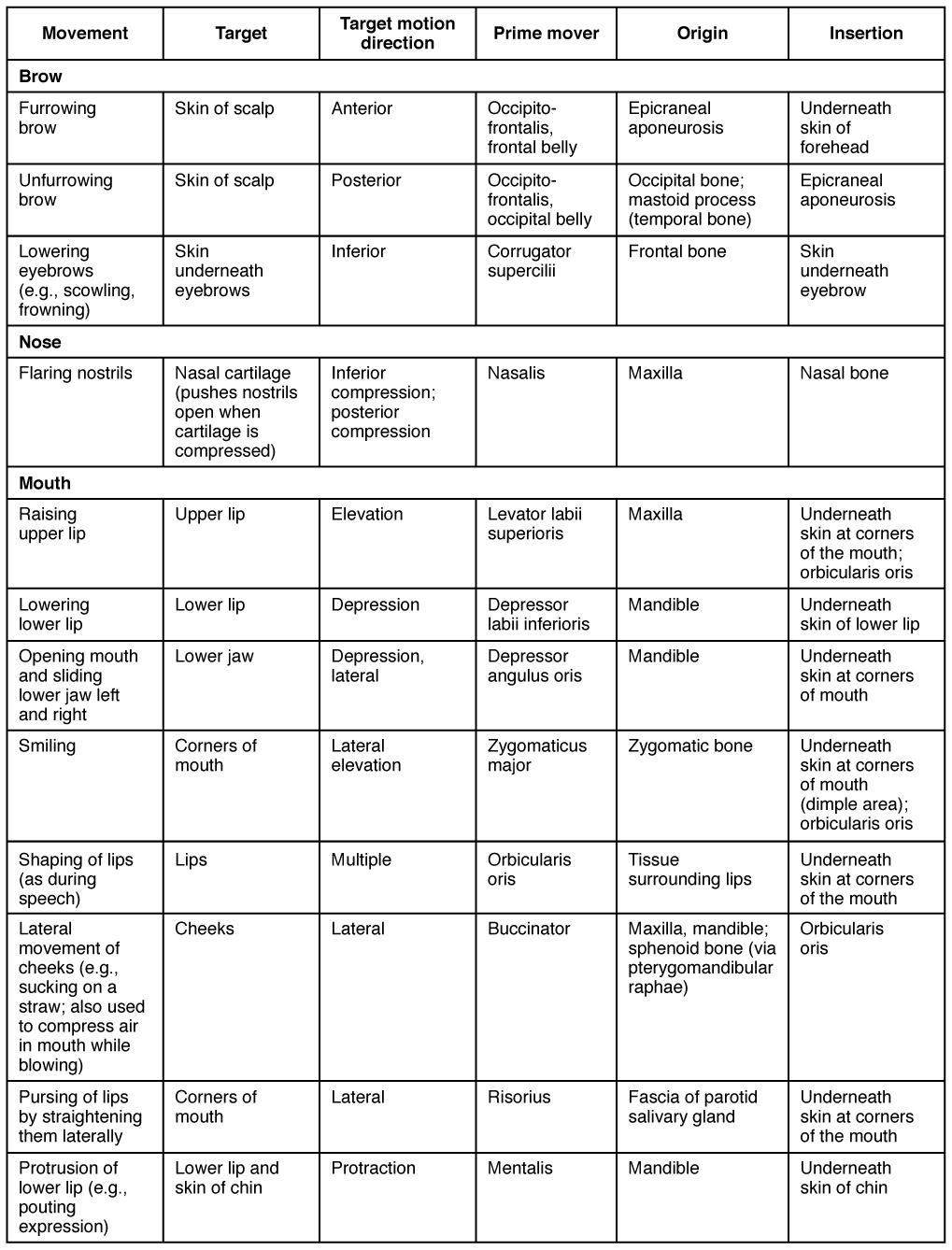 Muscles That Move the Eyes

The movement of the eyeball is under the control of the extrinsic eye muscles, which originate outside the eye and insert onto the outer surface of the white of the eye. These muscles are located inside the eye socket and cannot be seen on any part of the visible eyeball ([link] and [link]). If you have ever been to a doctor who held up a finger and asked you to follow it up, down, and to both sides, he or she is checking to make sure your eye muscles are acting in a coordinated pattern.

Muscles of the Eyes
(a) The extrinsic eye muscles originate outside of the eye on the skull. (b) Each muscle inserts onto the eyeball.

Muscles That Move the Lower Jaw

In anatomical terminology, chewing is called mastication. Muscles involved in chewing must be able to exert enough pressure to bite through and then chew food before it is swallowed ([link] and [link]). The masseter muscle is the main muscle used for chewing because it elevates the mandible (lower jaw) to close the mouth, and it is assisted by the temporalis muscle, which retracts the mandible. You can feel the temporalis move by putting your fingers to your temple as you chew.

Although the masseter and temporalis are responsible for elevating and closing the jaw to break food into digestible pieces, the medial pterygoid and lateral pterygoid muscles provide assistance in chewing and moving food within the mouth.

Muscles That Move the Tongue

Although the tongue is obviously important for tasting food, it is also necessary for mastication, deglutition (swallowing), and speech ([link] and [link]). Because it is so moveable, the tongue facilitates complex speech patterns and sounds.

Muscles that Move the Tongue 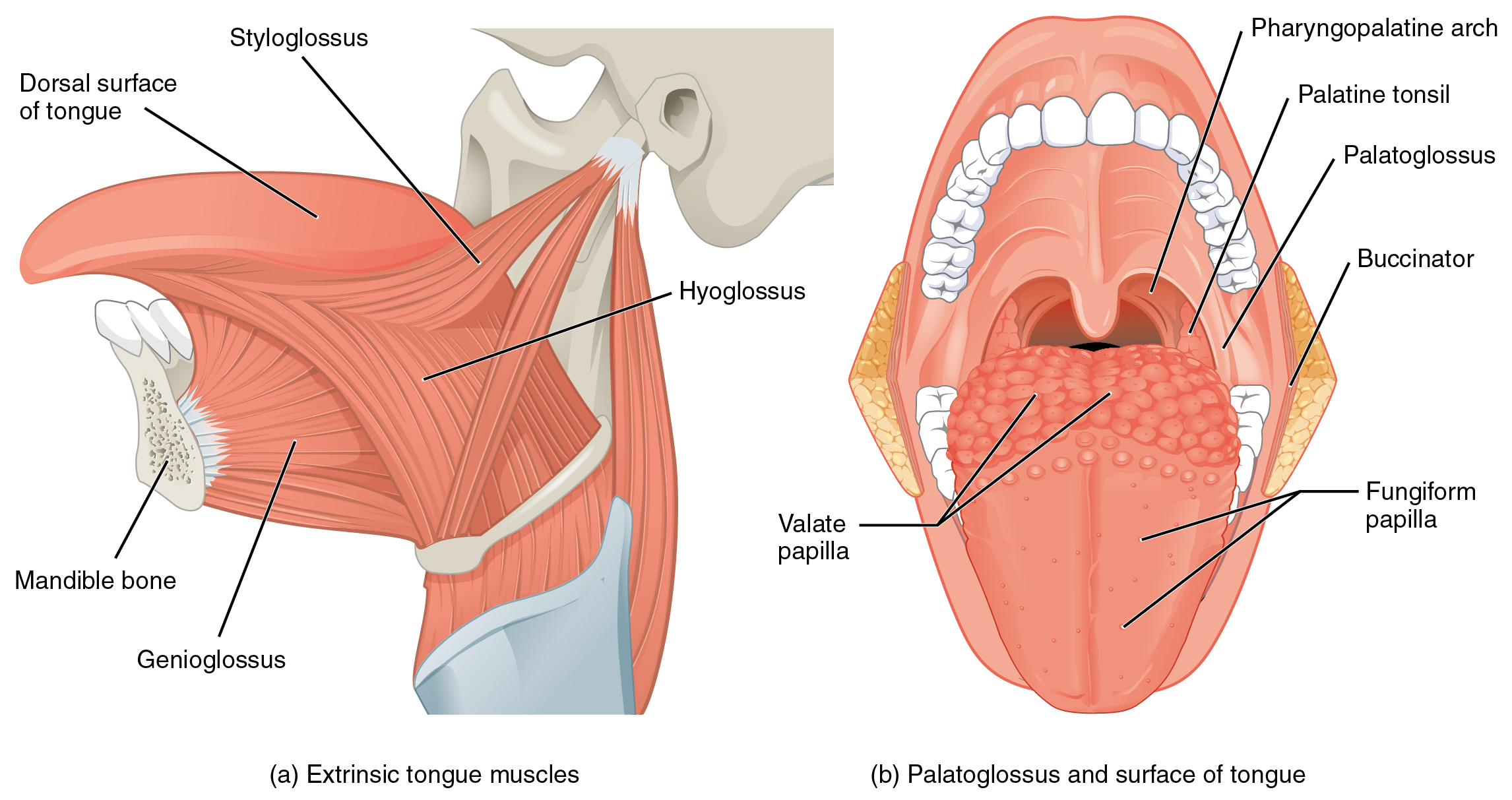 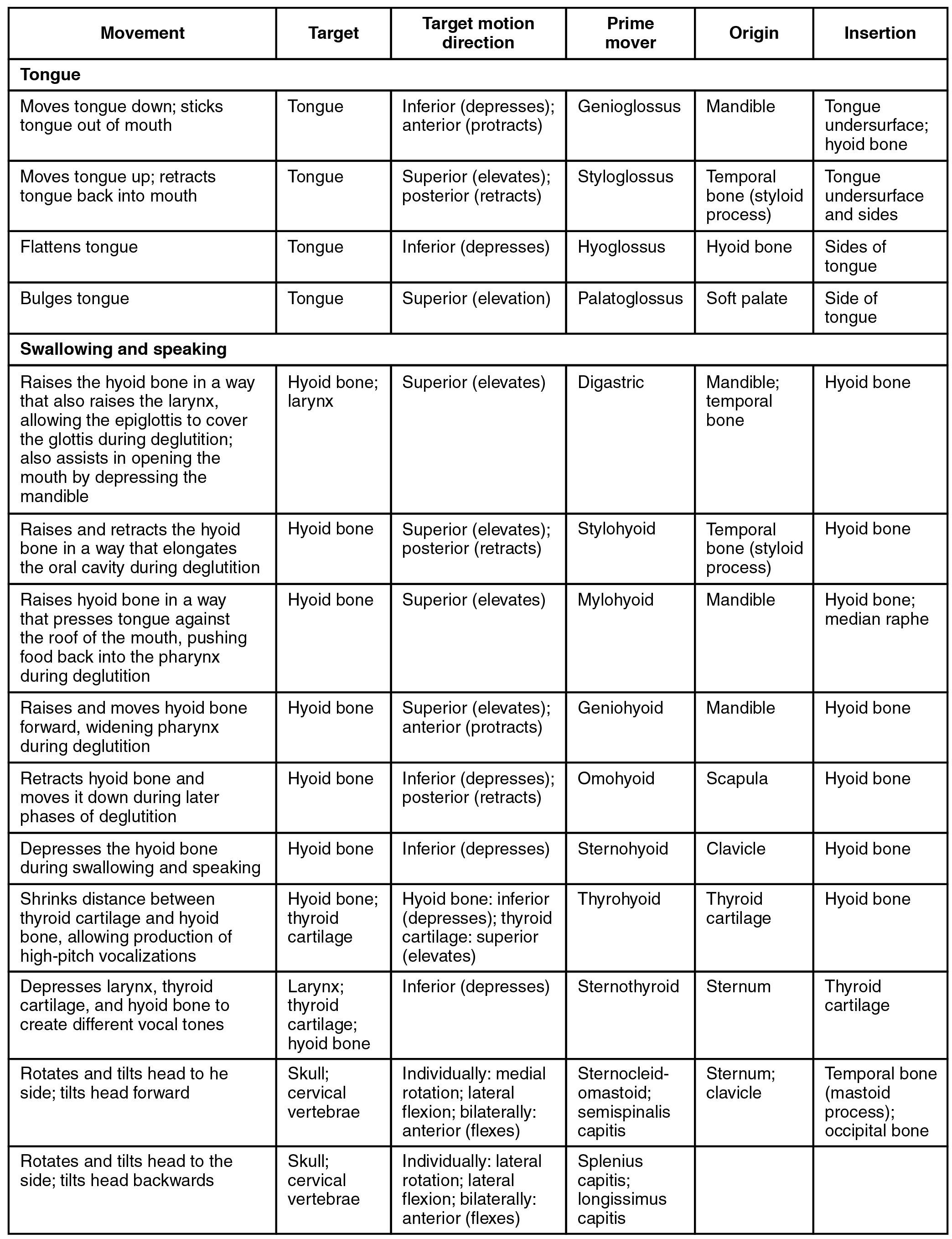 Anesthesia and the Tongue Muscles
Before surgery, a patient must be made ready for general anesthesia. The normal homeostatic controls of the body are put “on hold” so that the patient can be prepped for surgery. Control of respiration must be switched from the patient’s homeostatic control to the control of the anesthesiologist. The drugs used for anesthesia relax a majority of the body’s muscles.

Among the muscles affected during general anesthesia are those that are necessary for breathing and moving the tongue. Under anesthesia, the tongue can relax and partially or fully block the airway, and the muscles of respiration may not move the diaphragm or chest wall. To avoid possible complications, the safest procedure to use on a patient is called endotracheal intubation. Placing a tube into the trachea allows the doctors to maintain a patient’s (open) airway to the lungs and seal the airway off from the oropharynx. Post-surgery, the anesthesiologist gradually changes the mixture of the gases that keep the patient unconscious, and when the muscles of respiration begin to function, the tube is removed. It still takes about 30 minutes for a patient to wake up, and for breathing muscles to regain control of respiration. After surgery, most people have a sore or scratchy throat for a few days.

Muscles of the Anterior Neck

The muscles of the anterior neck assist in deglutition (swallowing) and speech by controlling the positions of the larynx (voice box), and the hyoid bone, a horseshoe-shaped bone that functions as a solid foundation on which the tongue can move. The muscles of the neck are categorized according to their position relative to the hyoid bone ([link]). Suprahyoid muscles are superior to it, and the infrahyoid muscles are located inferiorly. 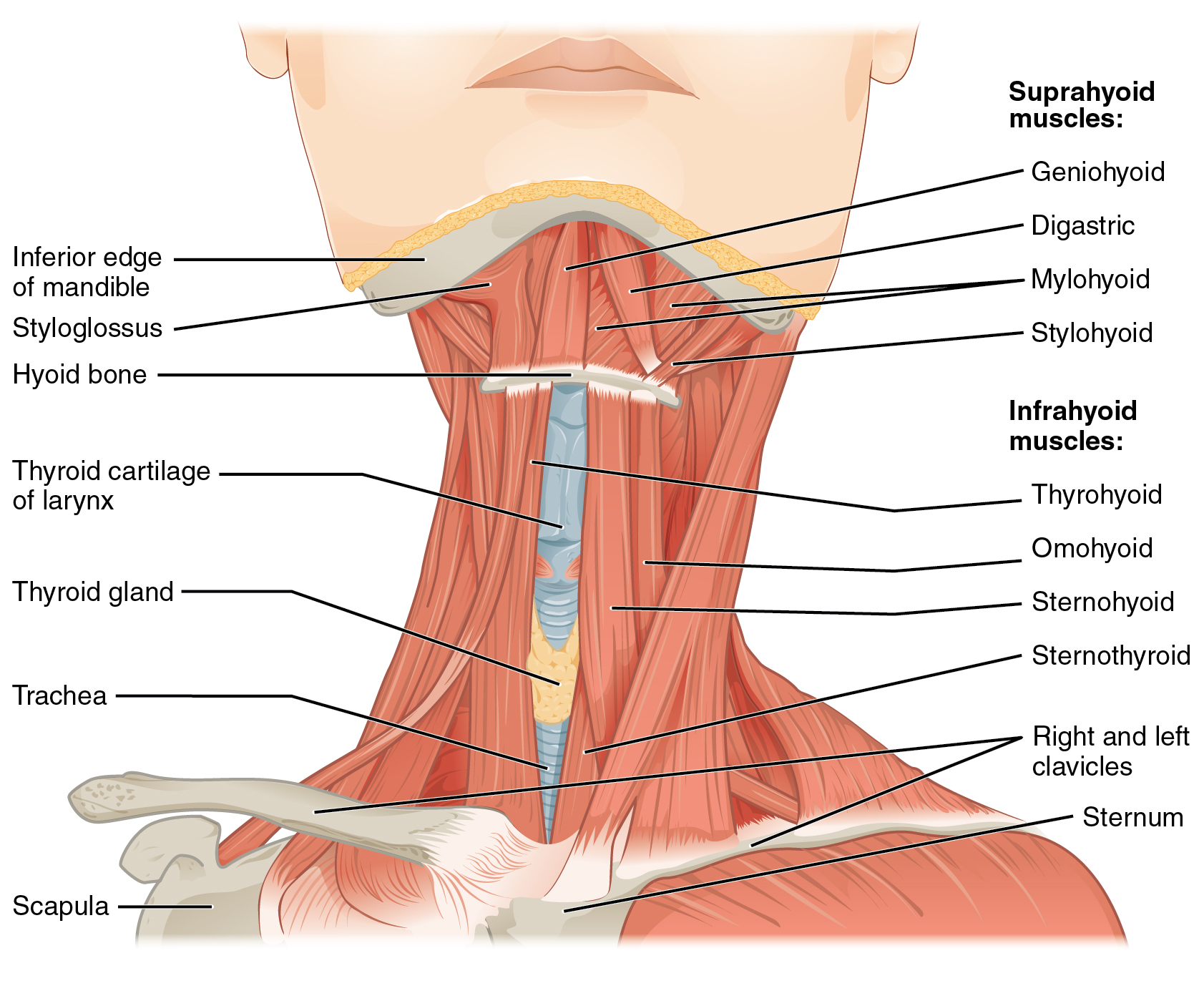 Muscles That Move the Head

The head, attached to the top of the vertebral column, is balanced, moved, and rotated by the neck muscles ([link]). When these muscles act unilaterally, the head rotates. When they contract bilaterally, the head flexes or extends. The major muscle that laterally flexes and rotates the head is the sternocleidomastoid. In addition, both muscles working together are the flexors of the head. Place your fingers on both sides of the neck and turn your head to the left and to the right. You will feel the movement originate there. This muscle divides the neck into anterior and posterior triangles when viewed from the side ([link]).

Posterior and Lateral Views of the Neck
The superficial and deep muscles of the neck are responsible for moving the head, cervical vertebrae, and scapulas.

Muscles of the Posterior Neck and the Back

The posterior muscles of the neck are primarily concerned with head movements, like extension. The back muscles stabilize and move the vertebral column, and are grouped according to the lengths and direction of the fascicles.

The splenius muscles originate at the midline and run laterally and superiorly to their insertions. From the sides and the back of the neck, the splenius capitis inserts onto the head region, and the splenius cervicis extends onto the cervical region. These muscles can extend the head, laterally flex it, and rotate it ([link]). 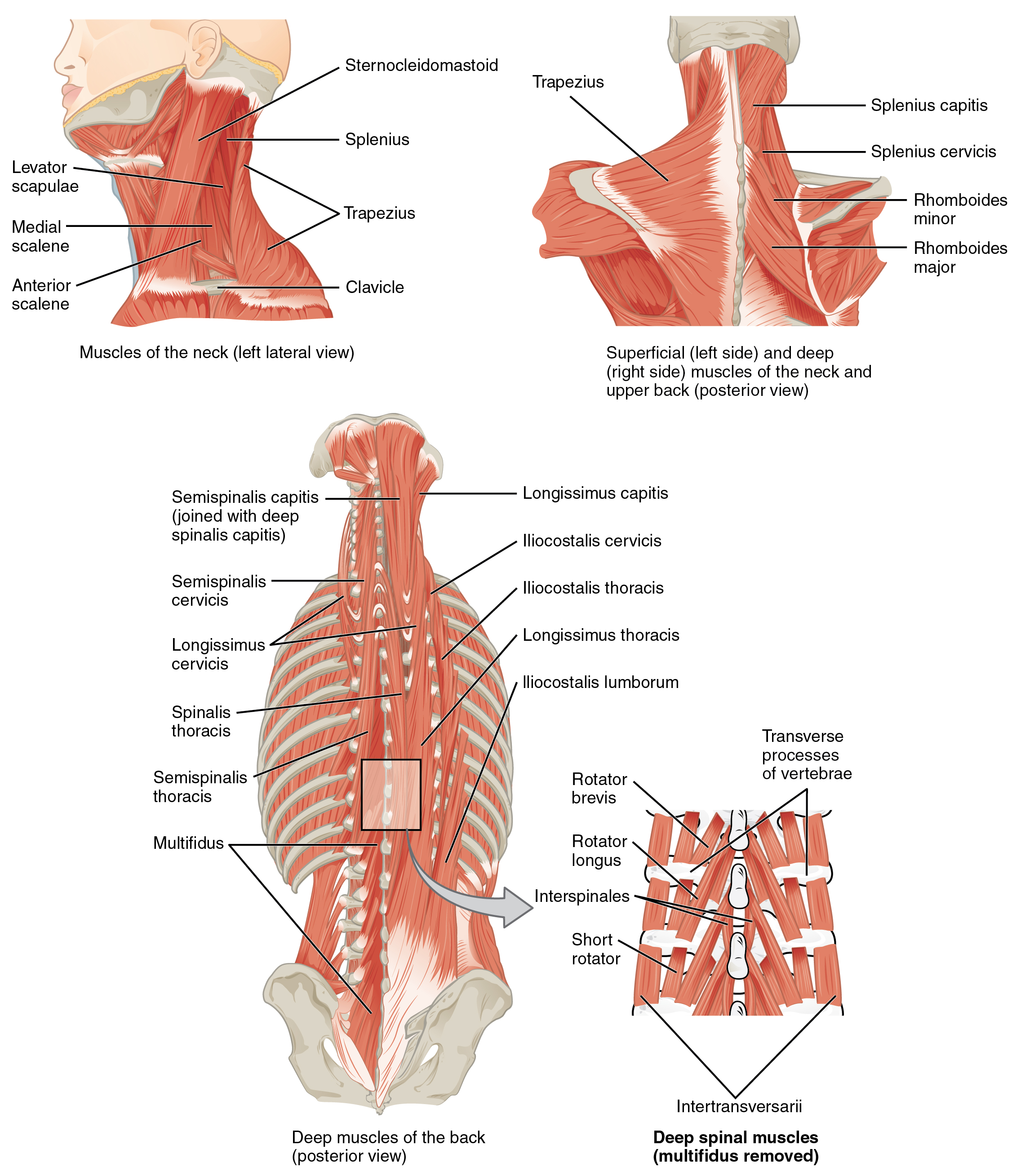 Muscles are either axial muscles or appendicular. The axial muscles are grouped based on location, function, or both. Some axial muscles cross over to the appendicular skeleton. The muscles of the head and neck are all axial. The muscles in the face create facial expression by inserting into the skin rather than onto bone. Muscles that move the eyeballs are extrinsic, meaning they originate outside of the eye and insert onto it. Tongue muscles are both extrinsic and intrinsic. The genioglossus depresses the tongue and moves it anteriorly; the styloglossus lifts the tongue and retracts it; the palatoglossus elevates the back of the tongue; and the hyoglossus depresses and flattens it. The muscles of the anterior neck facilitate swallowing and speech, stabilize the hyoid bone and position the larynx. The muscles of the neck stabilize and move the head. The sternocleidomastoid divides the neck into anterior and posterior triangles.

Which of the following is a prime mover in head flexion?

Where is the inferior oblique muscle located?

What is the action of the masseter?

The names of the extrinsic tongue muscles commonly end in ________.

What is the function of the erector spinae?

Explain the difference between axial and appendicular muscles.

Describe the muscles of the anterior neck.

Why are the muscles of the face different from typical skeletal muscle?

Most skeletal muscles create movement by actions on the skeleton. Facial muscles are different in that they create facial movements and expressions by pulling on the skin—no bone movements are involved.

anterior scalene
a muscle anterior to the middle scalene

appendicular
of the arms and legs

axial
of the trunk and head

buccinator
muscle that compresses the cheek

digastric
muscle that has anterior and posterior bellies and elevates the hyoid bone and larynx when one swallows; it also depresses the mandible

erector spinae group
large muscle mass of the back; primary extensor of the vertebral column

extrinsic eye muscles
originate outside the eye and insert onto the outer surface of the white of the eye, and create eyeball movement

geniohyoid
muscle that depresses the mandible, and raises and pulls the hyoid bone anteriorly

infrahyoid muscles
anterior neck muscles that are attached to, and inferior to the hyoid bone

lateral pterygoid
muscle that moves the mandible from side to side

medial pterygoid
muscle that moves the mandible from side to side

splenius capitis
neck muscle that inserts into the head region

splenius cervicis
neck muscle that inserts into the cervical region

sternocleidomastoid
major muscle that laterally flexes and rotates the head

styloglossus
muscle that originates on the styloid bone, and allows upward and backward motion of the tongue

suprahyoid muscles
neck muscles that are superior to the hyoid bone

temporalis
muscle that retracts the mandible

Axial Muscles of the Head, Neck, and Back by OpenStaxCollege is licensed under a Creative Commons Attribution 4.0 International License, except where otherwise noted.