Parathyroid Glands
The small parathyroid glands are embedded in the posterior surface of the thyroid gland. LM × 760. (Micrograph provided by the Regents of University of Michigan Medical School © 2012)

The parathyroid glands produce and secrete PTH, a peptide hormone, in response to low blood calcium levels ([link]). PTH secretion causes the release of calcium from the bones by stimulating osteoclasts, which secrete enzymes that degrade bone and release calcium into the interstitial fluid. PTH also inhibits osteoblasts, the cells involved in bone deposition, thereby sparing blood calcium. PTH causes increased reabsorption of calcium (and magnesium) in the kidney tubules from the urine filtrate. In addition, PTH initiates the production of the steroid hormone calcitriol (also known as 1,25-dihydroxyvitamin D), which is the active form of vitamin D3, in the kidneys. Calcitriol then stimulates increased absorption of dietary calcium by the intestines. A negative feedback loop regulates the levels of PTH, with rising blood calcium levels inhibiting further release of PTH. 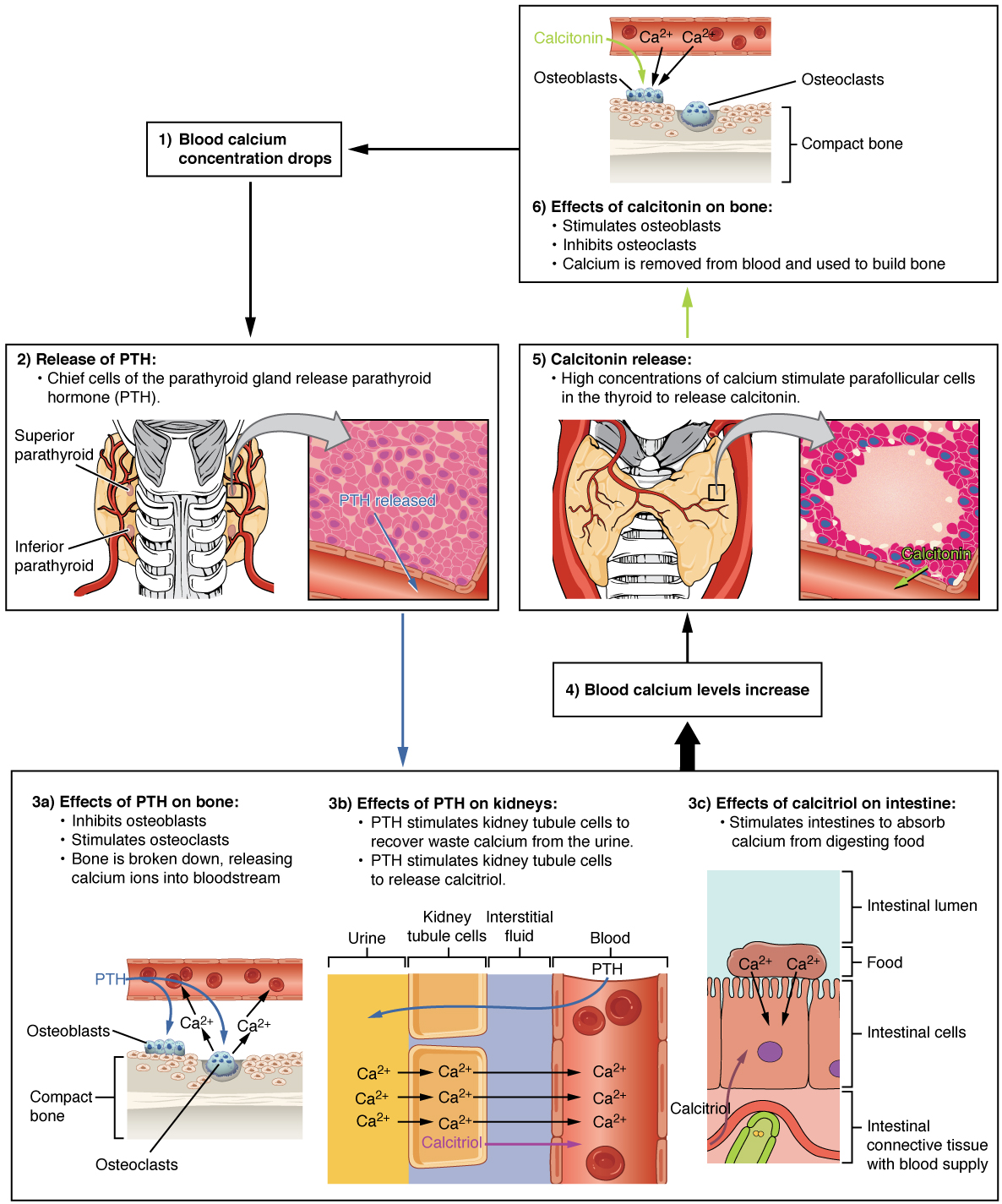 Abnormally high activity of the parathyroid gland can cause hyperparathyroidism, a disorder caused by an overproduction of PTH that results in excessive calcium reabsorption from bone. Hyperparathyroidism can significantly decrease bone density, leading to spontaneous fractures or deformities. As blood calcium levels rise, cell membrane permeability to sodium is decreased, and the responsiveness of the nervous system is reduced. At the same time, calcium deposits may collect in the body’s tissues and organs, impairing their functioning.

In contrast, abnormally low blood calcium levels may be caused by parathyroid hormone deficiency, called hypoparathyroidism, which may develop following injury or surgery involving the thyroid gland. Low blood calcium increases membrane permeability to sodium, resulting in muscle twitching, cramping, spasms, or convulsions. Severe deficits can paralyze muscles, including those involved in breathing, and can be fatal.

When blood calcium levels are high, calcitonin is produced and secreted by the parafollicular cells of the thyroid gland. As discussed earlier, calcitonin inhibits the activity of osteoclasts, reduces the absorption of dietary calcium in the intestine, and signals the kidneys to reabsorb less calcium, resulting in larger amounts of calcium excreted in the urine.

Which of the following can result from hyperparathyroidism?

Describe the role of negative feedback in the function of the parathyroid gland.

Explain why someone with a parathyroid gland tumor might develop kidney stones.

A parathyroid gland tumor can prompt hypersecretion of PTH. This can raise blood calcium levels so excessively that calcium deposits begin to accumulate throughout the body, including in the kidney tubules, where they are referred to as kidney stones.

The Parathyroid Glands by OpenStaxCollege is licensed under a Creative Commons Attribution 4.0 International License, except where otherwise noted.