Grinders are normally used to either smooth or cut hard surfaces and materials depending upon the type of accessory and material being used. The basic grinding tool consists of a motor with an abrasive wheel, wire brush or other attachment attached to the arbor (shaft) by a female threaded fastener (arbor nut).  Some manufacturers’ arbor nut configuration requires a propitiatory wrench or spanner for removal and installation of their own specially designed style of fastener. Grinders are offered in both portable and stationary models, and some come with a variable speed option.  Each style of grinder can be accessorized for specific applications and functions and components differ by manufacturer.

When choosing accessories for grinders, it is extremely important to note the the revolutions per minute (r.p.m.) rating of the accessory meets or exceeds the r.p.m. of the grinder. An inappropriately sized grinder accessory can shatter or break resulting in injury. Grinders should always be unplugged or the battery should be disconnected from the tool before changing accessories. Portable grinders, like many other rotating power tools, have the potential for kickback and operators should take the same basic precautions as when operating a portable power saw. Bench grinders have tool rests, or tables for stabilizing items being ground. These should be adjusted as close to the grinding wheel as possible to prevent injury in the event of the wheel grabbing the item and pulling the operators hand/s in the direction of the wheel. Bench grinders are also required to have adjustable, impact resistant, clear lens guards, protective eye wear should always be worn by the operator when using any grinder. Due to the wide variety of grinding tools and applications, be sure to consult manufacturer directions before operating any power tool you are unfamiliar with. Although some of these tools are also offered in special versions that can be used in the presence of water to cool the blade or stone and flush debris from the cut or material surface, most grinders are not suited for wet applications.

Sanding Discs for grinders usually require a hard rubber backing plate to be attached to the grinder and for the disc to be attached to the backing plate by an adhesive or hook-and-loop fastening system, to create an orbital sander. The disc’s sandpaper material composition should be selected according to the material being sanded (see Sandpaper Material Composition).

Buffing Bonnets and Wheels used for buffing metals, plastics, quarry stone and other surfaces can be made of cotton, microfiber, and other materials regularly used in hand polishing items. While bonnets are mounted to backing plates on portable grinders of buffers, buffing wheels are mounted to the arbor of stationary grinders with the arbor nut.

Regardless of whether you are sanding by hand or using a power sander, identifying the right sanding tool and sandpaper to be used for a project can be a daunting task if you’re unfamiliar with the capability of the sanding tools and the variety of sandpapers available for specific applications. Sanders can be used to form and shape a wide variety of materials and to strip or create fine finishes. When working with electric power sanders, when the tool is fitted with a variable speed option, the speed should be adjusted to a speed that creates the best cutting action in order to realize the full potential of the tool and sandpaper being used based on the material being sanded and the finish desired. As with other power tools, it is important to let the tool do the work. Too much pressure on the tool can slow or dampen the machine’s action, creating less cutting action due to excessive friction or not allowing the tool to rotate or vibrate at all. Some sanders rotate in one continuous motion (orbital or track) that can leave sanding lines or swirl marks in materials. Random orbital and oscillating sanders work in multiple pathways that create fewer lines and finer finishes. 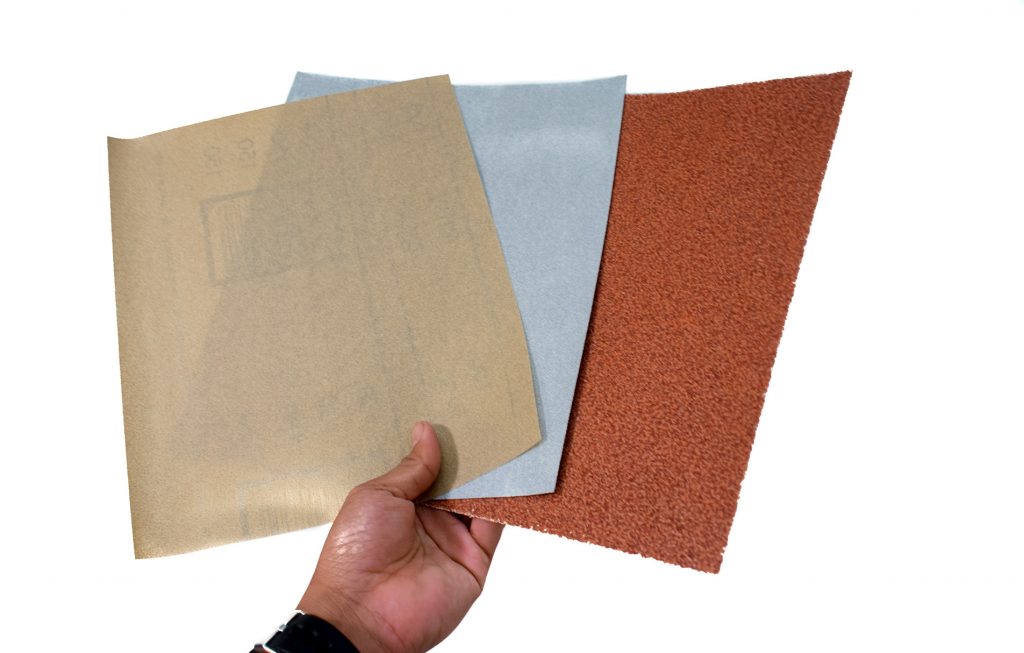 Sandpaper Rectangle by Dexter Corpuz is licensed under CC BY 4.0

Grit is the term use to identify the coarseness (roughness) of the material on the sandpaper. Sandpapers are labeled by a number denoting their coarseness: the lower the number, the coarser the grit of the sandpaper and rougher finish; the higher the number, the finer the grit and smoother finish. The sandpaper’s cutting material can consist of aluminum oxide, garnet, or silicon, and can even be used in emery cloth that resist breakdown in wet applications. For sanding items that require extensive work, it is best to start with a coarse sandpaper, graduating incrementally to finer grits to obtain the desired finish. 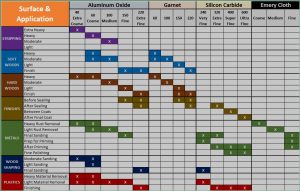 Sandpaper Selection Chart by Clifford Rutherford is licensed under CC BY 4.0