When organizations want to communicate value, they must determine what message strategies work best for them. Smart organizations determine a product’s unique selling proposition (USP), or specific benefit consumers will remember. Domino’s “Pizza delivered in 30 minutes or it’s free” is a good example of a unique selling proposition. Likewise, Nike’s global slogan “Just Do It” helps athletes and other consumers realize their potential, and many consumers may think of all the things that they do when they use Nike products. Watch the following video on Nike to get an idea of the many different activities people from different countries do when using Nike products.

People around the World Use Nike Products

Nike products are used for many different sports by all types of athletes.

When deciding on a message strategy, organizations must consider the audience, the objectives of the promotion, the media, and the budget, as well as the USP and the product. Knowing your audience and whom you are trying to reach is critical. The more advertisers know about the consumers (or businesses) exposed to the message, the better. Commercials for golf products shown during golf tournaments focus specifically on golfers. Other commercials, such as several recent ones for the fast-food chain Hardee’s, are on the risqué side. They may appeal to some college students but may offend other consumers such as senior citizens. What do you think? Do you think Hardee’s is trying to reach a younger demographic? Do the ads make you more inclined to purchase fast food from Hardee’s? See the Hardee’s commercial in the video below.

This commercial that may be offensive to some consumers.

Advertisers must also examine their promotion objectives. What are they trying to accomplish with their promotions? Are they trying to build awareness for a new product, are they wanting to get people to take action immediately, or are they interested in having people remember their brand in the future? Building primary demand, or demand for a product category, such as orange juice, might be one objective, but a company also wants to build selective demand, or demand for its specific brand(s), such as Tropicana orange juice.

Other common objectives follow the AIDA model (attention, interest, desire, and action). AIDA objectives typically are achieved in steps. First, companies focus on attention and awareness of a product or service, which is especially important for new offerings. If a consumer or business is not aware of a product or service, they won’t buy it. Once consumers or businesses are aware of products or services, organizations try to get consumers interested and persuade them that their brands are best. Ultimately, companies want consumers to take action or purchase their products or services.

Organizations must also determine what type of appeal to use and how to structure their messages. Some of the common advertising appeals are humorous, emotional, frightening (fear), rational (informative), and environmentally conscious. If you were asked to name your favorite commercial, would it be one with a humorous appeal? Many people like commercials that use humor because they are typically entertaining and memorable. Humor sells, but firms must be careful that the brand is remembered. Some commercials are very entertaining, but consumers cannot remember the brand or product.

Each year, some of the most talked-about commercials take place during the Super Bowl. Many people watch the game just to see the commercials. Watch the following YouTube videos to see one of the top ten Super Bowl commercials of all time and how newer commercials relied on a similar approach. Notice how many of them use a humorous appeal. But do you think some are more effective than others? In other words, will viewers actually buy the product(s)?

This commercial uses a child and fun to appeal to many consumers.

Rated One of the Best Super Bowl Commercials of 2009

Coke Zero uses the same approach in 2009 as the award-winning commercial in the 1980 Super Bowl.

Pepsi’s Version of “Asking for a Shirt”

Pepsi uses a humorous approach for a commercial although it was not a Super Bowl commercial.

See the Coke man in a Pepsi commercial.

Pepsi and the Song, “Your Cheatin Heart”

Pepsi used a similar strategy in 1996.

Companies must also be careful when using fear appeals so consumers don’t get too alarmed or frightened. A few years ago, Reebok had to discontinue a TV ad because it upset so many people. The ad showed a bungee jumper diving off a bridge, followed by a shot of just his shoes hanging from the bridge by the bungee cord. That ad provoked people because it implied the jumper had fallen to his death.

Firms also decide whether to use strategies such as an open-ended or closed-ended message; whether to use a one-sided or two-sided message; and whether to use slogans, characters, or jingles. An open-ended message allows the consumer to draw his or her own conclusion, such as a commercial for perfume or cologne. A closed-ended message draws a logical conclusion. Most messages are one sided, stressing only the positive aspects, similar to what you include on your résumé. However, two-sided messages are often utilized as well. Pharmaceutical companies often show both the positive aspects (benefits) of using a drug and the negative aspects of not using it. (Of course, U.S. laws require companies to list the side effects of prescriptions—hence the long “warnings” you hear and read about in conjunction with drug ads.)

Example of an Open-Ended Commercial

Do you interpret cologne and perfume ads the same way you see them portrayed on television?

The order of presentation also affects how well consumers remember a brand. If you forgot about a twenty-five-page term paper that you had to write before the next day of class, which sections of the paper would be the strongest? Would the beginning, the end, or the middle be the best section? Many students argue that either the beginning or the end is most important, hoping that the instructor does not read the entire paper carefully. The same strategy is true for commercials and advertisements. The beginning and the end of the message should be strong and include the brand name. That way, if consumers hear or read only part of the message, they will hopefully remember the brand name. 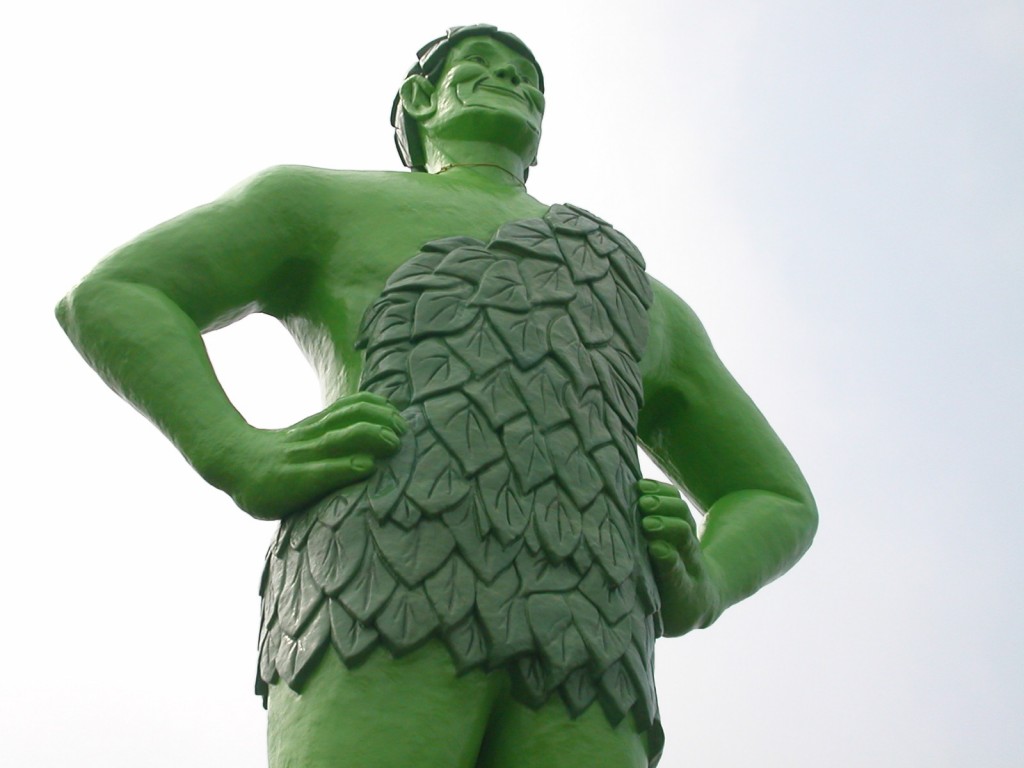 The Jolly Green Giant helped kids remember the Green Giant jingle and hopefully reminded them to eat their vegetables.

Some companies use characters or mascots and/or jingles or slogans. Although media is changing, many of the characters and jingles have stayed the same for decades. When you think of Campbell’s soup, do you think “Mm, mm good”? Just as the commercials viewed in the beginning of the chapter focused on “Mm, mm good,” Campbell’s has used the same slogan since the early 1900s, and the Campbell Soup Kids were created in 1904. Although Campbell’s changed its slogan in 1998, the company still uses the “Mm, mm good” slogan in most of its promotions across different media. Apparently, the slogan still resonates with consumers. Other jingles, characters (mascots), or symbols you may be familiar with include the Jolly Green Giant, the Wienermobile, and the Pillsbury Doughboy known as Poppin’ Fresh. How successful are advertisers in making sure consumers know their brands? Try the brand quiz at http://www.smartmarketingquiz.com/ and see how many brand icons you know. The following figures also illustrate some of these characters and symbols. 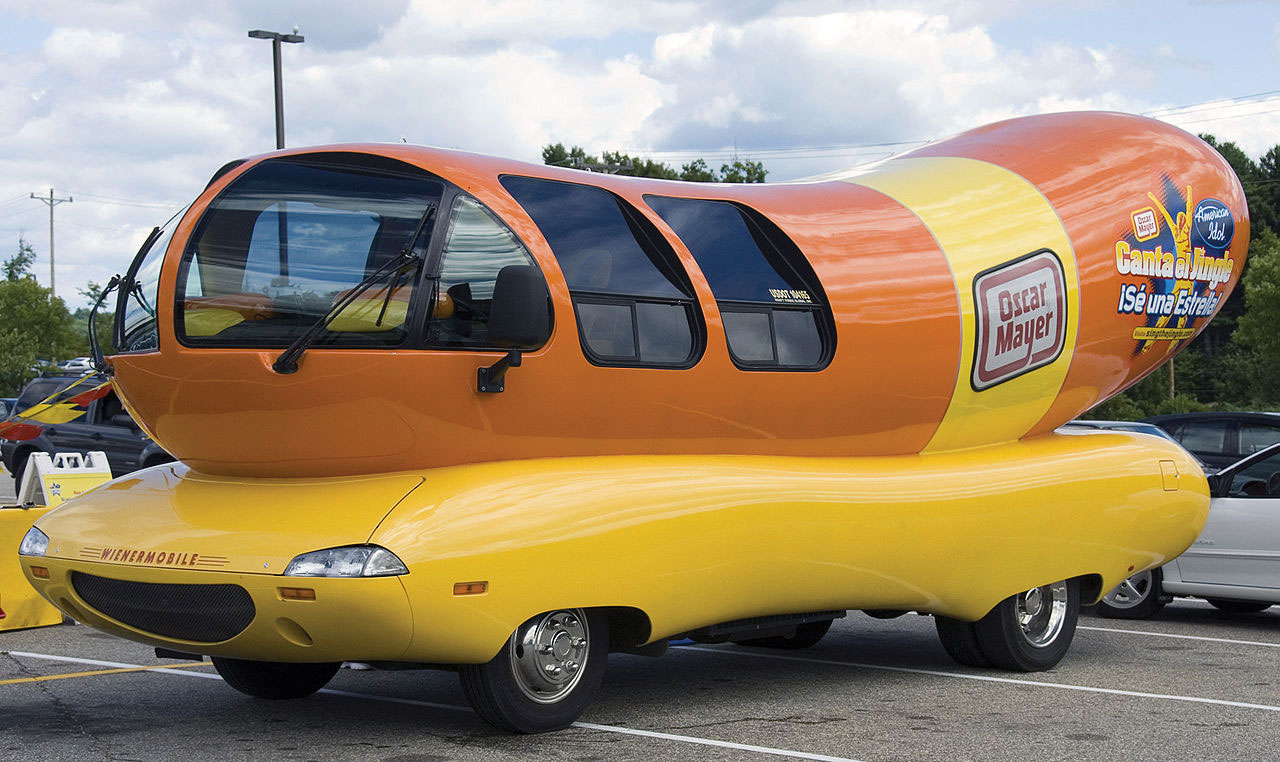 The Wienermobile tours the country. 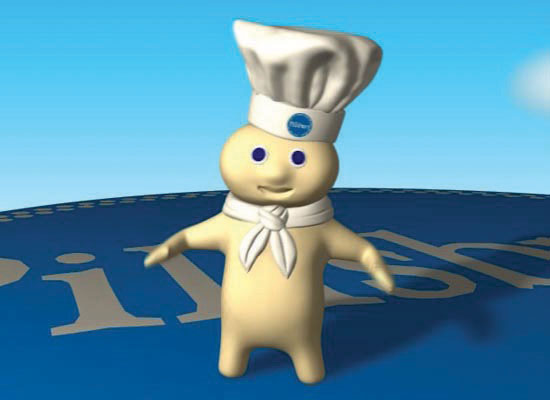 The Pillsbury Doughboy, Poppin’ Fresh, is popular around the world.

Do you remember the Oscar Mayer jingles? Watch the video below and see if you find yourself singing along. The jingle was originally developed in 1963 and is now recorded in different languages. In 2006 Oscar Mayer promoted a singing contest for the jingle, which still remains popular. Kraft’s promotions are also consistent across media, using the visuals from commercials as pictures in their print ads in both English and Spanish versions, following the IMC concept.

Often considered one of the best original ads on TV, the Oscar Mayer Wiener song is known by people of all ages.

The Oscar Mayer Bologna song is also well known among consumers of all ages.

Organizations must determine promotion objectives, or what they want to accomplish with their promotions. For example, if a company has a new brand they may want to generate awareness or attention. Later, they may focus on persuading customers to buy their brand. Each brand needs to have a unique selling proposition (USP) for customers to remember and want their product. Depending on their objectives and their USP, marketers must develop a message strategy. Some companies prefer humor or rational appeals while others may use a fear appeal.