Social psychology examines how people affect one another, and it looks at the power of the situation. Social psychologists assert that an individual’s thoughts, feelings, and behaviors are very much influenced by social situations. Essentially, people will change their behavior to align with the social situation at hand. If we are in a new situation or are unsure how to behave, we will take our cues from other individuals.

The field of social psychology studies topics at both the intra- and interpersonal levels. Intrapersonal topics (those that pertain to the individual) include emotions and attitudes, the self, and social cognition (the ways in which we think about ourselves and others). Interpersonal topics (those that pertain to dyads and groups) include helping behavior ([link]), aggression, prejudice and discrimination, attraction and close relationships, and group processes and intergroup relationships.

Social psychology deals with all kinds of interactions between people, spanning a wide range of how we connect: from moments of confrontation to moments of working together and helping others, as shown here. (credit: Sgt. Derec Pierson, U.S. Army) 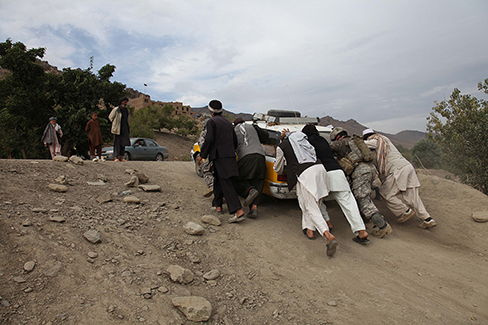 Social psychologists focus on how people construe or interpret situations and how these interpretations influence their thoughts, feelings, and behaviors (Ross & Nisbett, 1991). Thus, social psychology studies individuals in a social context and how situational variables interact to influence behavior. In this chapter, we discuss the intrapersonal processes of self-presentation, cognitive dissonance and attitude change, and the interpersonal processes of conformity and obedience, aggression and altruism, and, finally, love and attraction.

SITUATIONAL AND DISPOSITIONAL INFLUENCES ON BEHAVIOR

Behavior is a product of both the situation (e.g., cultural influences, social roles, and the presence of bystanders) and of the person (e.g., personality characteristics). Subfields of psychology tend to focus on one influence or behavior over others. Situationism is the view that our behavior and actions are determined by our immediate environment and surroundings. In contrast, dispositionism holds that our behavior is determined by internal factors (Heider, 1958). An internal factor is an attribute of a person and includes personality traits and temperament. Social psychologists have tended to take the situationist perspective, whereas personality psychologists have promoted the dispositionist perspective. Modern approaches to social psychology, however, take both the situation and the individual into account when studying human behavior (Fiske, Gilbert, & Lindzey, 2010). In fact, the field of social-personality psychology has emerged to study the complex interaction of internal and situational factors that affect human behavior (Mischel, 1977; Richard, Bond, & Stokes-Zoota, 2003).

In the United States, the predominant culture tends to favor a dispositional approach in explaining human behavior. Why do you think this is? We tend to think that people are in control of their own behaviors, and, therefore, any behavior change must be due to something internal, such as their personality, habits, or temperament. According to some social psychologists, people tend to overemphasize internal factors as explanations—or attributions—for the behavior of other people. They tend to assume that the behavior of another person is a trait of that person, and to underestimate the power of the situation on the behavior of others. They tend to fail to recognize when the behavior of another is due to situational variables, and thus to the person’s state. This erroneous assumption is called the fundamental attribution error (Ross, 1977; Riggio & Garcia, 2009). To better understand, imagine this scenario: Greg returns home from work, and upon opening the front door his wife happily greets him and inquires about his day. Instead of greeting his wife, Greg yells at her, “Leave me alone!” Why did Greg yell at his wife? How would someone committing the fundamental attribution error explain Greg’s behavior? The most common response is that Greg is a mean, angry, or unfriendly person (his traits). This is an internal or dispositional explanation. However, imagine that Greg was just laid off from his job due to company downsizing. Would your explanation for Greg’s behavior change? Your revised explanation might be that Greg was frustrated and disappointed for losing his job; therefore, he was in a bad mood (his state). This is now an external or situational explanation for Greg’s behavior.

In the quizmaster study, people tended to disregard the influence of the situation and wrongly concluded that a questioner’s knowledge was greater than their own. (credit: Steve Jurvetson) 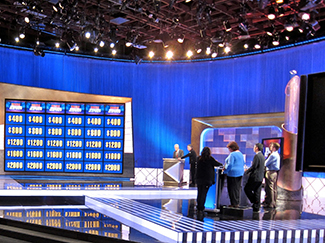 IS THE FUNDAMENTAL ATTRIBUTION ERROR A UNIVERSAL PHENOMENON?

Why do you think this is the case? Collectivistic cultures, which tend to be found in east Asian countries and in Latin American and African countries, focus on the group more than on the individual (Nisbett, Peng, Choi, & Norenzayan, 2001). This focus on others provides a broader perspective that takes into account both situational and cultural influences on behavior; thus, a more nuanced explanation of the causes of others’ behavior becomes more likely. [link] summarizes compares individualistic and collectivist cultures.

Returning to our earlier example, Greg knew that he lost his job, but an observer would not know. So a naïve observer would tend to attribute Greg’s hostile behavior to Greg’s disposition rather than to the true, situational cause. Why do you think we underestimate the influence of the situation on the behaviors of others? One reason is that we often don’t have all the information we need to make a situational explanation for another person’s behavior. The only information we might have is what is observable. Due to this lack of information we have a tendency to assume the behavior is due to a dispositional, or internal, factor. When it comes to explaining our own behaviors, however, we have much more information available to us. If you came home from school or work angry and yelled at your dog or a loved one, what would your explanation be? You might say you were very tired or feeling unwell and needed quiet time—a situational explanation. The actor-observer bias is the phenomenon of attributing other people’s behavior to internal factors (fundamental attribution error) while attributing our own behavior to situational forces (Jones & Nisbett, 1971; Nisbett, Caputo, Legant, & Marecek, 1973; Choi & Nisbett, 1998). As actors of behavior, we have more information available to explain our own behavior. However as observers, we have less information available; therefore, we tend to default to a dispositionist perspective. 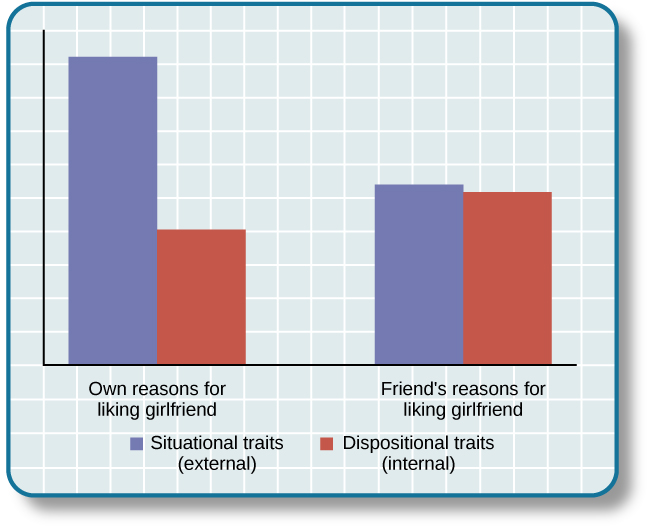 We can understand self-serving bias by digging more deeply into attribution, a belief about the cause of a result. One model of attribution proposes three main dimensions: locus of control (internal versus external), stability (stable versus unstable), and controllability (controllable versus uncontrollable). In this context, stability refers the extent to which the circumstances that result in a given outcome are changeable. The circumstances are considered stable if they are unlikely to change. Controllability refers to the extent to which the circumstances that are associated with a given outcome can be controlled. Obviously, those things that we have the power to control would be labeled controllable (Weiner, 1979).

Consider the example of how we explain our favorite sports team’s wins. Research shows that we make internal, stable, and controllable attributions for our team’s victory ([link]) (Grove, Hanrahan, & McInman, 1991). For example, we might tell ourselves that our team is talented (internal), consistently works hard (stable), and uses effective strategies (controllable). In contrast, we are more likely to make external, unstable, and uncontrollable attributions when our favorite team loses. For example, we might tell ourselves that the other team has more experienced players or that the referees were unfair (external), the other team played at home (unstable), and the cold weather affected our team’s performance (uncontrollable).

We tend to believe that our team wins because it’s better, but loses for reasons it cannot control (Roesch & Amirkham, 1997). (credit: “TheAHL”/Flickr) 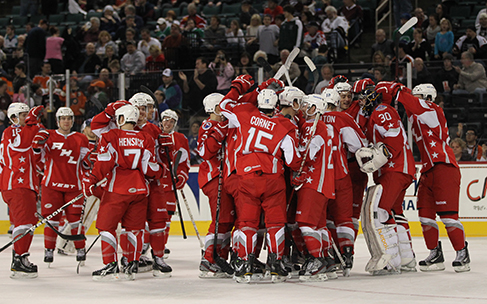 One consequence of westerners’ tendency to provide dispositional explanations for behavior is victim blame (Jost & Major, 2001). When people experience bad fortune, others tend to assume that they somehow are responsible for their own fate. A common ideology, or worldview, in the United States is the just-world hypothesis. The just-world hypothesis is the belief that people get the outcomes they deserve (Lerner & Miller, 1978). In order to maintain the belief that the world is a fair place, people tend to think that good people experience positive outcomes, and bad people experience negative outcomes (Jost, Banaji, & Nosek, 2004; Jost & Major, 2001). The ability to think of the world as a fair place, where people get what they deserve, allows us to feel that the world is predictable and that we have some control over our life outcomes (Jost et al., 2004; Jost & Major, 2001). For example, if you want to experience positive outcomes, you just need to work hard to get ahead in life.

Can you think of a negative consequence of the just-world hypothesis? One negative consequence is people’s tendency to blame poor individuals for their plight. What common explanations are given for why people live in poverty? Have you heard statements such as, “The poor are lazy and just don’t want to work” or “Poor people just want to live off the government”? What types of explanations are these, dispositional or situational? These dispositional explanations are clear examples of the fundamental attribution error. Blaming poor people for their poverty ignores situational factors that impact them, such as high unemployment rates, recession, poor educational opportunities, and the familial cycle of poverty ([link]). Other research shows that people who hold just-world beliefs have negative attitudes toward people who are unemployed and people living with AIDS (Sutton & Douglas, 2005). In the United States and other countries, victims of sexual assault may find themselves blamed for their abuse. Victim advocacy groups, such as Domestic Violence Ended (DOVE), attend court in support of victims to ensure that blame is directed at the perpetrators of sexual violence, not the victims.

People who hold just-world beliefs tend to blame the people in poverty for their circumstances, ignoring situational and cultural causes of poverty. (credit: Adrian Miles) 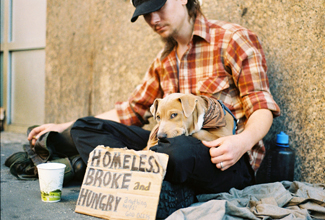 Social psychology is the subfield of psychology that studies the power of the situation to influence individuals’ thoughts, feelings, and behaviors. Psychologists categorize the causes of human behavior as those due to internal factors, such as personality, or those due to external factors, such as cultural and other social influences. Behavior is better explained, however, by using both approaches. Lay people tend to over-rely on dispositional explanations for behavior and ignore the power of situational influences, a perspective called the fundamental attribution error. People from individualistic cultures are more likely to display this bias versus people from collectivistic cultures. Our explanations for our own and others behaviors can be biased due to not having enough information about others’ motivations for behaviors and by providing explanations that bolster our self-esteem.

As a field, social psychology focuses on ________ in predicting human behavior.

According to the actor-observer bias, we have more information about ________.

Provide an example of how people from individualistic and collectivistic cultures would differ in explaining why they won an important sporting event.

Provide a personal example of an experience in which your behavior was influenced by the power of the situation.

Think of an example in the media of a sports figure—player or coach—who gives a self-serving attribution for winning or losing. Examples might include accusing the referee of incorrect calls, in the case of losing, or citing their own hard work and talent, in the case of winning.

attribution
explanation for the behavior of other people

collectivist culture
culture that focuses on communal relationships with others such as family, friends, and community

dispositionism
describes a perspective common to personality psychologists, which asserts that our behavior is determined by internal factors, such as personality traits and temperament

individualistic culture
culture that focuses on individual achievement and autonomy

internal factor
internal attribute of a person, such as personality traits or temperament

situationism
describes a perspective that behavior and actions are determined by the immediate environment and surroundings; a view promoted by social psychologists

social psychology
field of psychology that examines how people impact or affect each other, with particular focus on the power of the situation

What Is Social Psychology? by OpenStaxCollege is licensed under a Creative Commons Attribution 4.0 International License, except where otherwise noted.