The human body uses carbohydrate, fat and protein in food and from body stores as energy. These essential nutrients are needed regardless of the intensity of activity you are doing. If you are lying down reading a book or running the the Honolulu Marathon, these macronutrients are always needed in the body. However, in order for these nutrients to be used as fuel for the body, their energy must be transferred into the high energy molecule known as Adenosine Triphosphate (ATP). ATP is the body’s immediate fuel source of energy that can be generated either with the presences of oxygen known as aerobic metabolism or without the presence of oxygen by anaerobic metabolism. The type of metabolism that is predominately used during physical activity is determined by the availability of oxygen and how much carbohydrate, fat, and protein are used.

Physical Activity Duration and Fuel Use

The respiratory system plays a vital role in the uptake and delivery of oxygen to muscle cells throughout the body. Oxygen is inhaled by the lungs and transferred from the lungs to the blood where the cardiovascular system circulates the oxygen-rich blood to the muscles.  The oxygen is then taken up by the muscles and can be used to generate ATP. When the body is at rest, the heart and lungs are able to supply the muscles with adequate amounts of oxygen to meet the aerobic metabolism energy needs. However, during physical activity your muscles energy and oxygen needs are increased. In order to provide more oxygen to the muscle cells, your heart rate and breathing rate will increase. The amount of oxygen that is delivered to the tissues via the cardiovascular and respiratory systems during exercise depend on the duration, intensity and physical conditioning of the individual.

During the first few steps of exercise, your muscles are the first to respond to the change in activity level. Your lungs and heart however do not react as quickly and during those beginning steps they do not begin to increase the delivery of oxygen. In order for our bodies to get the energy that is needed in these beginning steps, the muscles rely on a small amount of ATP that is stored in resting muscles. The stored ATP is able to provide energy for only a few seconds before it is depleted. Once the stored ATP is just about used up, the body resorts to another high-energy molecule known as creatine phosphate to convert ADP (adenosine diphosphate) to ATP. After about 10 seconds, the stored creatine phosphate in the muscle cells are also depleted as well.

About 15 seconds into exercise, the stored ATP and creatine phosphate are used up in the muscles. The heart and lungs have still not adapted to the increase need of oxygen so the muscles must begin to produce ATP by anaerobic metabolism (without oxygen). Anaerobic metabolism can produce ATP at a rapid pace but only uses glucose as its fuel source. The glucose is obtained from the blood of muscle glycogen. At around 30 seconds, anaerobic pathways are operating at their full capacity but because the availability of glucose is limited, it cannot continue for a long period of time.

As your exercise reaches two to three minutes, your heart rate and breathing rate have increased to supply more oxygen to your muscles. Aerobic metabolism is the most efficient way of producing ATP by producing 18 times more ATP for each molecule of glucose than anaerobic metabolism. Although the primary source of ATP in aerobic metabolism is carbohydrates, fatty acids and protein can also be used as fuel to generate ATP.

Figure 16.4 The Effect of Exercise Duration on Energy Systems

The fuel sources for anaerobic and aerobic metabolism will change depending on the amount of nutrients available and the type of metabolism. Glucose may come from blood glucose (which is from dietary carbohydrates or liver glycogen and glucose synthesis) or muscle glycogen. Glucose is the primary energy source for both anaerobic and aerobic metabolism. Fatty acids are stored as triglycerides in muscles but about 90% of stored energy is found in adipose tissue. As low to moderate intensity exercise continues using aerobic metabolism, fatty acids become the predominant fuel source for the exercising muscles. Although protein is not considered a major energy source, small amounts of amino acids are used while resting or doing an activity.  The amount of amino acids used for energy metabolism increase if the total energy intake from your diet does not meet the nutrient needs or if you are involved in long endurance exercises. When amino acids are broken down removing the nitrogen-containing amino acid, that remaining carbon molecule can be broken down into ATP via aerobic metabolism or used to make glucose. When exercise continues for many hours, amino acid use will increase as an energy source and for glucose synthesis. 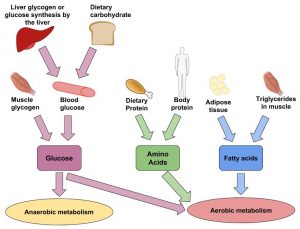 Physical Activity Intensity and Fuel Use

The exercise intensity determines the contribution of the type of fuel source used for ATP production(see Figure 16.4 “The Effect of Exercise Intensity on Fuel Sources”). Both anaerobic and aerobic metabolism combine during exercise to ensure that the muscles are equipped with enough ATP to carry out the demands placed on them. The amount of contribution from each type of metabolism will depend on the intensity of an activity. When low-intensity activities are performed, aerobic metabolism is used to supply enough ATP to muscles. However, during high-intensity activities more ATP is needed so the muscles must rely on both anaerobic and aerobic metabolism to meet the body’s demands.

Figure 16.6 The Effect of Exercise Intensity on Fuel Sources 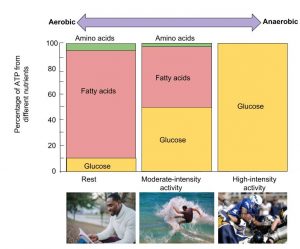 “Hitting the Wall” or “Bonking”

If you are familiar with endurance sports, you may have heard of “hitting the wall” or “bonking.” These colloquial terms refer to the extreme fatigue that sets in after about 120 minutes of performing an endurance sport, such as marathon running or long-distance cycling. The physiology underlying “hitting the wall” means that muscles have used up all their stored glycogen and are therefore dependent on other nutrients to support their energy needs. Fatty acids are transported from fat-storing cells to the muscle to rectify the nutrient deficit. However, fatty acids take more time to convert to energy than glucose, thus decreasing performance levels. To avoid “hitting the wall” or “bonking,” endurance athletes load up on carbohydrates for a few days before the event, known as carbohydrate loading. This will maximize an athlete’s amount of glycogen stored in their liver and muscle tissues. It is important not to assume that carbohydrate loading works for everyone. Without accompanied endurance training you will not increase the amount of stored glucose. If you plan on running a five-mile race for fun with your friend and decide to eat a large amount of carbohydrates in the form of a big spaghetti dinner the night before, the excess carbohydrates will be stored as fat. Therefore, if you are not an endurance athlete exercising for more than 90 minutes, carbohydrate loading will provide no benefit, and can even have some disadvantages. Another way for athletes to avoid “hitting the wall” is to consume carbohydrate-containing drinks and foods during an endurance event. In fact, throughout the Tour de France—a twenty-two-day, twenty-four-hundred-mile race—the average cyclist consumes greater than 60 grams of carbohydrates per hour.