Calcium is the most abundant mineral in the body and greater than 99 percent of it is stored in bone tissue. Although only 1 percent of the calcium in the human body is found in the blood and soft tissues, it is here that it performs the most critical functions. Blood calcium levels are rigorously controlled so that if blood levels drop the body will rapidly respond by stimulating bone resorption, thereby releasing stored calcium into the blood.  Thus, bone tissue sacrifices its stored calcium to maintain blood calcium levels. This is why bone health is dependent on the intake of dietary calcium and also why blood levels of calcium do not always correspond to dietary intake.

Calcium plays a role in a number of different functions in the body like bone and tooth formation. The most well-known calcium function is to build and strengthen bones and teeth. Recall that when bone tissue first forms during the modeling or remodeling process, it is unhardened, protein-rich osteoid tissue. In the osteoblast-directed process of bone mineralization, calcium phosphates (salts) are deposited on the protein matrix. The calcium salts typically make up about 65 percent of bone tissue. When your diet is calcium deficient, the mineral content of bone decreases causing it to become brittle and weak. Thus, increased calcium intake helps to increase the mineralized content of bone tissue. Greater mineralized bone tissue corresponds to a greater BMD, and to greater bone strength. The remaining calcium plays a role in nerve impulse transmission by facilitating electrical impulse transmission from one nerve cell to another. Calcium in muscle cells is essential for muscle contraction because the flow of calcium ions are needed for the muscle proteins (actin and myosin) to interact. Calcium is also essential in blood clotting by activating clotting factors to fix damaged tissue.

In addition to calcium’s four primary functions calcium has several other minor functions that are also critical for maintaining normal physiology. For example, without calcium, the hormone insulin could not be released from cells in the pancreas and glycogen could not be broken down in muscle cells and used to provide energy for muscle contraction.

Because calcium performs such vital functions in the body, blood calcium level is closely regulated by the hormones parathyroid hormone (PTH), calcitriol, and calcitonin. When blood calcium levels are low, PTH is secreted to increase blood calcium levels via three different mechanisms. First, PTH stimulates the release of calcium stored in the bone. Second, PTH acts on kidney cells to increase calcium reabsorption and decrease its excretion in the urine. Third, PTH stimulates enzymes in the kidney that activate vitamin D to calcitriol.  Calcitriol is the active hormone that acts on the intestinal cells and increases dietary calcium absorption. When blood calcium levels become too high, the hormone calcitonin is secreted by certain cells in the thyroid gland and PTH secretion stops.  At higher nonphysiological concentrations, calcitonin lowers blood calcium levels by increasing calcium excretion in the urine, preventing further absorption of calcium in the gut and by directly inhibiting bone resorption. 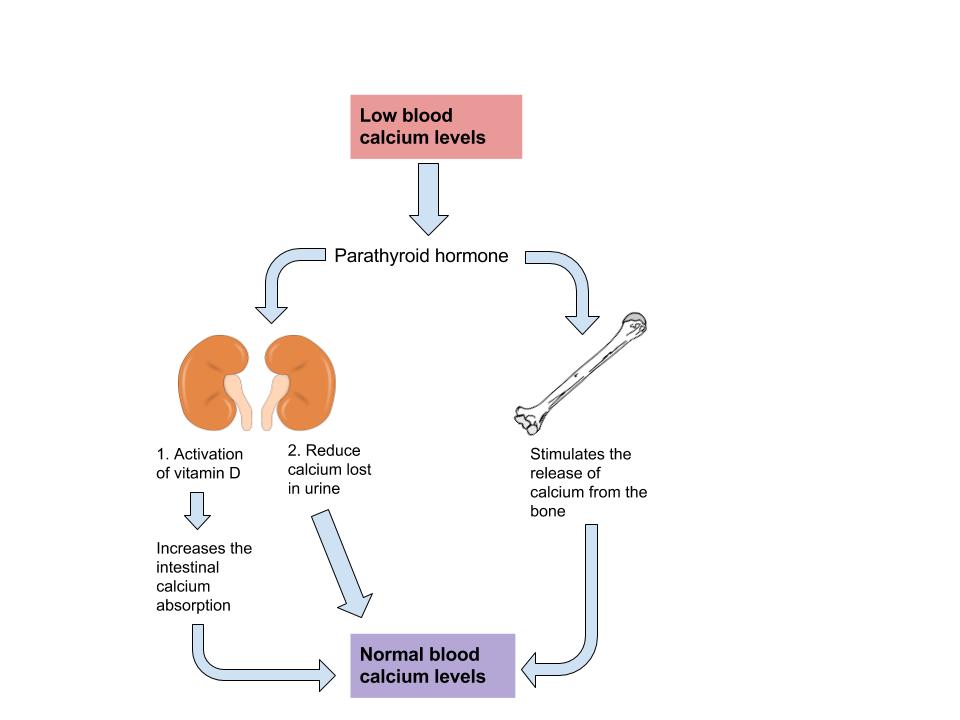 Other Health Benefits of Calcium in the Body

Besides forming and maintaining strong bones and teeth, calcium has been shown to have other health benefits for the body, including:

Calcium inadequacy is most prevalent in adolescent girls and the elderly. Proper dietary intake of calcium is critical for proper bone health.

Despite the wealth of evidence supporting the many health benefits of calcium (particularly bone health), the average American diet falls short of achieving the recommended dietary intakes of calcium. In fact, in females older than nine years of age, the average daily intake of calcium is only about 70 percent of the recommended intake. Here we will take a closer look at particular groups of people who may require extra calcium intake.

In addition, because vegans avoid dairy products, their overall consumption of calcium-rich foods may be less.

If you are lactose intolerant, have a milk allergy, are a vegan, or you simply do not like dairy products, remember that there are many plant-based foods that have a good amount of calcium and there are also some low-lactose and lactose-free dairy products on the market.

Calcium Supplements: Which One to Buy?

Many people choose to fulfill their daily calcium requirements by taking calcium supplements. Calcium supplements are sold primarily as calcium carbonate, calcium citrate, calcium lactate, and calcium phosphate, with elemental calcium contents of about 200 milligrams per pill. It is important to note that calcium carbonate requires an acidic environment in the stomach to be used effectively. Although this is not a problem for most people, it may be for those on medication to reduce stomach-acid production or for the elderly who may have a reduced ability to secrete acid in the stomach. For these people, calcium citrate may be a better choice. Otherwise, calcium carbonate is the cheapest. The body is capable of absorbing approximately 30 percent of the calcium from these forms.

There is public health concern about the lead content of some brands of calcium supplements, as supplements derived from natural sources such as oyster shell, bone meal, and dolomite (a type of rock containing calcium magnesium carbonate) are known to contain high amounts of lead. In one study conducted on twenty-two brands of calcium supplements, it was proven that eight of the brands exceeded the acceptable limit for lead content. This was found to be the case in supplements derived from oyster shell and refined calcium carbonate. The same study also found that brands claiming to be lead-free did, in fact, show very low lead levels. Because lead levels in supplements are not disclosed on labels, it is important to know that products not derived from oyster shell or other natural substances are generally low in lead content. In addition, it was also found that one brand did not disintegrate as is necessary for absorption, and one brand contained only 77 percent of the stated calcium content.[9]

In general, calcium supplements perform to a lesser degree than dietary sources of calcium in providing many of the health benefits linked to higher calcium intake. This is partly attributed to the fact that dietary sources of calcium supply additional nutrients with health-promoting activities. It is reported that chelated forms of calcium supplements are easier to absorb as the chelation process protects the calcium from oxalates and phytates that may bind with the calcium in the intestines. However, these are more expensive supplements and only increase calcium absorption up to 10 percent. In people with low dietary intakes of calcium, calcium supplements have a negligible benefit on bone health in the absence of a vitamin D supplement. However, when calcium supplements are taken along with vitamin D, there are many benefits to bone health: peak bone mass is increased in early adulthood, BMD is maintained throughout adulthood, the risk of developing osteoporosis is reduced, and the incidence of fractures is decreased in those who already had osteoporosis. Calcium and vitamin D pills do not have to be taken at the same time for effectiveness. But remember that vitamin D has to be activated and in the bloodstream to promote calcium absorption. Thus, it is important to maintain an adequate intake of vitamin D.

A recent study published in the British Medical Journal reported that people who take calcium supplements at doses equal to or greater than 500 milligrams per day in the absence of a vitamin D supplement had a 30 percent greater risk for having a heart attack.[10]

The recommended dietary allowances (RDA) for calcium are listed in Table 10.1 “Dietary Reference Intakes for Calcium”. The RDA is elevated to 1,300 milligrams per day during adolescence because this is the life stage with accelerated bone growth. Studies have shown that a higher intake of calcium during puberty increases the total amount of bone tissue that accumulates in a person. For women above age fifty and men older than seventy-one, the RDAs are also a bit higher for several reasons including that as we age, calcium absorption in the gut decreases, vitamin D3 activation is reduced, and maintaining adequate blood levels of calcium is important to prevent an acceleration of bone tissue loss (especially during menopause). Currently, the dietary intake of calcium for females above age nine is, on average, below the RDA for calcium. The Institute of Medicine (IOM) recommends that people do not consume over 2,500 milligrams per day of calcium as it may cause adverse effects in some people.

In the typical American diet, calcium is obtained mostly from dairy products, primarily cheese. A slice of cheddar or Swiss cheese contains just over 200 milligrams of calcium. One cup of nonfat milk contains approximately 300 milligrams of calcium, which is about a third of the RDA for calcium for most adults. Foods fortified with calcium such as cereals, soy milk, and orange juice also provide one third or greater of the calcium RDA. Although the typical American diet relies mostly on dairy products for obtaining calcium, there are other good non-dairy sources of calcium.

If you need to increase calcium intake, are a vegan, or have a food allergy to dairy products, it is helpful to know that there are some plant-based foods that are high in calcium. Tofu (made with calcium sulfate), turnip greens, mustard greens, and chinese cabbage are good sources. For a list of non-dairy sources you can find the calcium content for thousands of foods by visiting the USDA National Nutrient Database (http://www.nal.usda.gov/fnic/foodcomp/search/). When obtaining your calcium from a vegan diet, it is important to know that some plant-based foods significantly impair the absorption of calcium. These include spinach, Swiss chard, rhubarb, beets, cashews, and peanuts. With careful planning and good selections, you can ensure that you are getting enough calcium in your diet even if you do not drink milk or consume other dairy products.

The greatest positive influence on calcium absorption comes from having an adequate intake of vitamin D. People deficient in vitamin D absorb less than 15 percent of calcium from the foods they eat. The hormone estrogen is another factor that enhances calcium bioavailability. Thus, as a woman ages and goes through menopause, during which estrogen levels fall, the amount of calcium absorbed decreases and the risk for bone disease increases. Some fibers, such as inulin, found in jicama, onions, and garlic, also promote calcium intestinal uptake.

Chemicals that bind to calcium decrease its bioavailability. These negative effectors of calcium absorption include the oxalates in certain plants, the tannins in tea, phytates in nuts, seeds, and grains, and some fibers. Oxalates are found in high concentrations in spinach, parsley, cocoa, and beets. In general, the calcium bioavailability is inversely correlated to the oxalate content in foods. High-fiber, low-fat diets also decrease the amount of calcium absorbed, an effect likely related to how fiber and fat influence the amount of time food stays in the gut. Anything that causes diarrhea, including sickness, medications, and certain symptoms related to old age, decreases the transit time of calcium in the gut and therefore decreases calcium absorption. As we get older, stomach acidity sometimes decreases, diarrhea occurs more often, kidney function is impaired, and vitamin D absorption and activation is compromised, all of which contribute to a decrease in calcium bioavailability.