The term personality refers loosely to one’s stable, consistent, and distinctive way of thinking about, feeling, acting, and relating to the world. People with personality disorders exhibit a personality style that differs markedly from the expectations of their culture, is pervasive and inflexible, begins in adolescence or early adulthood, and causes distress or impairment (APA, 2013). Generally, individuals with these disorders exhibit enduring personality styles that are extremely troubling and often create problems for them and those with whom they come into contact. Their maladaptive personality styles frequently bring them into conflict with others, disrupt their ability to develop and maintain social relationships, and prevent them from accomplishing realistic life goals.

The “borderline” in borderline personality disorder was originally coined in the late 1930s in an effort to describe patients who appeared anxious, but were prone to brief psychotic experiences—that is, patients who were thought to be literally on the borderline between anxiety and psychosis (Freeman, Stone, Martin, & Reinecke, 2005). Today, borderline personality disorder has a completely different meaning. Borderline personality disorder is characterized chiefly by instability in interpersonal relationships, self-image, and mood, as well as marked impulsivity (APA, 2013). People with borderline personality disorder cannot tolerate the thought of being alone and will make frantic efforts (including making suicidal gestures and engaging in self-mutilation) to avoid abandonment or separation (whether real or imagined). Their relationships are intense and unstable; for example, a lover may be idealized early in a relationship, but then later vilified at the slightest sign she appears to no longer show interest. These individuals have an unstable view of self and, thus, might suddenly display a shift in personal attitudes, interests, career plans, and choice of friends. For example, a law school student may, despite having invested tens of thousands of dollars toward earning a law degree and despite having performed well in the program, consider dropping out and pursuing a career in another field. People with borderline personality disorder may be highly impulsive and may engage in reckless and self-destructive behaviors such as excessive gambling, spending money irresponsibly, substance abuse, engaging in unsafe sex, and reckless driving. They sometimes show intense and inappropriate anger that they have difficulty controlling, and they can be moody, sarcastic, bitter, and verbally abusive.

The prevalence of borderline personality disorder in the U.S. population is estimated to be around 1.4% (Lezenweger et al., 2007), but the rates are higher among those who use mental health services; approximately 10% of mental health outpatients and 20% of psychiatric inpatients meet the criteria for diagnosis (APA, 2013). Additionally, borderline personality disorder is comorbid with anxiety, mood, and substance use disorders (Lezenweger et al., 2007).

Most human beings live in accordance with a moral compass, a sense of right and wrong. Most individuals learn at a very young age that there are certain things that should not be done. We learn that we should not lie or cheat. We are taught that it is wrong to take things that do not belong to us, and that it is wrong to exploit others for personal gain. We also learn the importance of living up to our responsibilities, of doing what we say we will do. People with antisocial personality disorder, however, do not seem to have a moral compass. These individuals act as though they neither have a sense of nor care about right or wrong. Not surprisingly, these people represent a serious problem for others and for society in general.

According to the DSM-5, the individual with antisocial personality disorder (sometimes referred to as psychopathy) shows no regard at all for other people’s rights or feelings. This lack of regard is exhibited a number of ways and can include repeatedly performing illegal acts, lying to or conning others, impulsivity and recklessness, irritability and aggressiveness toward others, and failure to act in a responsible way (e.g., leaving debts unpaid) (APA, 2013). The worst part about antisocial personality disorder, however, is that people with this disorder have no remorse over one’s misdeeds; these people will hurt, manipulate, exploit, and abuse others and not feel any guilt. Signs of this disorder can emerge early in life; however, a person must be at least 18 years old to be diagnosed with antisocial personality disorder.

People with antisocial personality disorder seem to view the world as self-serving and unkind. They seem to think that they should use whatever means necessary to get by in life. They tend to view others not as living, thinking, feeling beings, but rather as pawns to be used or abused for a specific purpose. They often have an over-inflated sense of themselves and can appear extremely arrogant. They frequently display superficial charm; for example, without really meaning it they might say exactly what they think another person wants to hear. They lack empathy: they are incapable of understanding the emotional point-of-view of others. People with this disorder may become involved in illegal enterprises, show cruelty toward others, leave their jobs with no plans to obtain another job, have multiple sexual partners, repeatedly get into fights with others, and show reckless disregard for themselves and others (e.g., repeated arrests for driving while intoxicated) (APA, 2013).

A useful way to conceptualize antisocial personality disorder is boiling the diagnosis down to three major concepts: disinhibition, boldness, and meanness (Patrick, Fowles, & Krueger, 2009). Disinhibition is a propensity toward impulse control problems, lack of planning and forethought, insistence on immediate gratification, and inability to restrain behavior. Boldness describes a tendency to remain calm in threatening situations, high self-assurance, a sense of dominance, and a tendency toward thrill-seeking. Meanness is defined as “aggressive resource seeking without regard for others,” and is signaled by a lack of empathy, disdain for and lack of close relationships with others, and a tendency to accomplish goals through cruelty (Patrick et al., 2009, p. 913).

Antisocial personality disorder is observed in about 3.6% of the population; the disorder is much more common among males, with a 3 to 1 ratio of men to women, and it is more likely to occur in men who are younger, widowed, separated, divorced, of lower socioeconomic status, who live in urban areas, and who live in the western United States (Compton, Conway, Stinson, Colliver, & Grant, 2005). Compared to men with antisocial personality disorder, women with the disorder are more likely to have experienced emotional neglect and sexual abuse during childhood, and they are more likely to have had parents who abused substances and who engaged in antisocial behaviors themselves (Alegria et al., 2013).

[link] shows some of the differences in the specific types of antisocial behaviors that men and women with antisocial personality disorder exhibit (Alegria et al., 2013).

Family, twin, and adoption studies suggest that both genetic and environmental factors influence the development of antisocial personality disorder, as well as general antisocial behavior (criminality, violence, aggressiveness) (Baker, Bezdjian, & Raine, 2006). Personality and temperament dimensions that are related to this disorder, including fearlessness, impulsive antisociality, and callousness, have a substantial genetic influence (Livesley & Jang, 2008). Adoption studies clearly demonstrate that the development of antisocial behavior is determined by the interaction of genetic factors and adverse environmental circumstances (Rhee & Waldman, 2002). For example, one investigation found that adoptees of biological parents with antisocial personality disorder were more likely to exhibit adolescent and adult antisocial behaviors if they were raised in adverse adoptive family environments (e.g., adoptive parents had marital problems, were divorced, used drugs, and had legal problems) than if they were raised in a more normal adoptive environment (Cadoret, Yates, Ed, Woodworth, & Stewart, 1995).

Researchers who are interested in the importance of environment in the development of antisocial personality disorder have directed their attention to such factors as the community, the structure and functioning of the family, and peer groups. Each of these factors influences the likelihood of antisocial behavior. One longitudinal investigation of more than 800 Seattle-area youth measured risk factors for violence at 10, 14, 16, and 18 years of age (Herrenkohl et al., 2000). The risk factors examined included those involving the family, peers, and community. A portion of the findings from this study are provided in [link]. 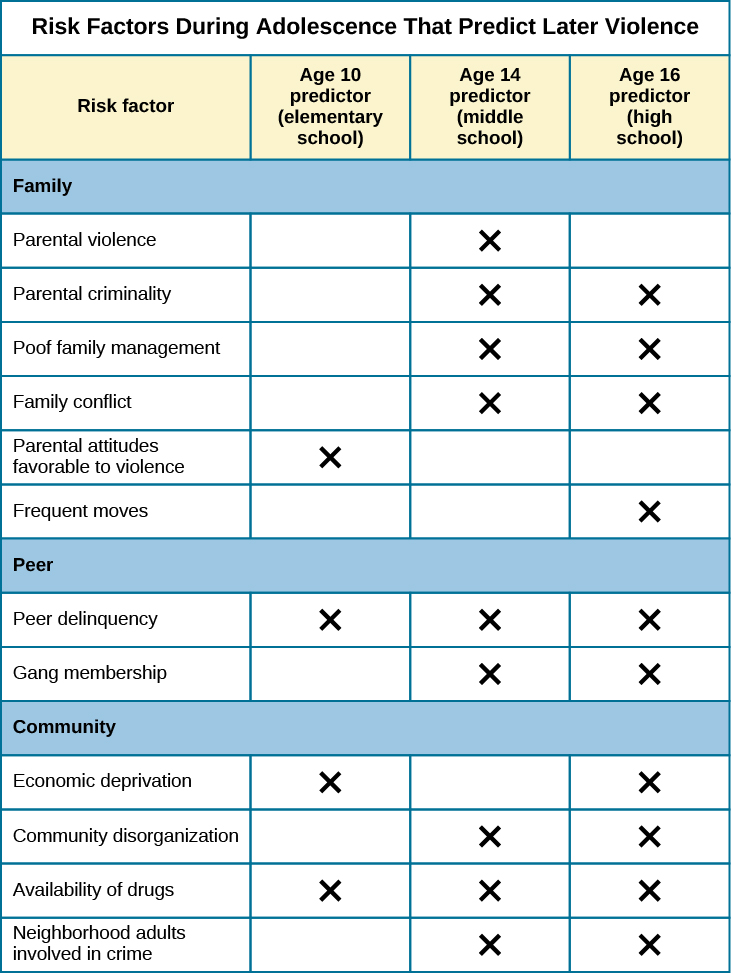 Those with antisocial tendencies do not seem to experience emotions the way most other people do. These individuals fail to show fear in response to environment cues that signal punishment, pain, or noxious stimulation. For instance, they show less skin conductance (sweatiness on hands) in anticipation of electric shock than do people without antisocial tendencies (Hare, 1965). Skin conductance is controlled by the sympathetic nervous system and is used to assess autonomic nervous system functioning. When the sympathetic nervous system is active, people become aroused and anxious, and sweat gland activity increases. Thus, increased sweat gland activity, as assessed through skin conductance, is taken as a sign of arousal or anxiety. For those with antisocial personality disorder, a lack of skin conductance may indicate the presence of characteristics such as emotional deficits and impulsivity that underlie the propensity for antisocial behavior and negative social relationships (Fung et al., 2005).

While emotional deficits may contribute to antisocial personality disorder, so too might an inability to relate to others’ pain. In a recent study, 80 prisoners were shown photos of people being intentionally hurt by others (e.g., someone crushing a person’s hand in an automobile door) while undergoing brain imaging (Decety, Skelly, & Kiehl, 2013). Prisoners who scored high on a test of antisocial tendencies showed significantly less activation in brain regions involved in the experience of empathy and feeling concerned for others than did prisoners with low scores on the antisocial test. Notably, the prisoners who scored high on the antisocial test showed greater activation in a brain area involved self-awareness, cognitive function, and interpersonal experience. The investigators suggested that the heightened activation in this region when watching social interactions involving one person harming another may reflect a propensity or desire for this kind of behavior.

Antisocial personality disorder is associated with ________.

The environment is likely to be very instrumental in determining the likelihood of developing antisocial personality disorder. Research has shown that adverse family environments (e.g., divorce or marital problems, legal problems, and drug use) are connected to antisocial personality disorder, particularly if one is genetically vulnerable. Beyond one’s family environment, peer group delinquency and community variables (e.g., economic deprivation, community disorganization, drug use, and the presence of adult antisocial models) heighten the risk of violent behavior.

antisocial personality disorder
characterized by a lack of regard for others’ rights, impulsivity, deceitfulness, irresponsibility, and lack of remorse over misdeeds

borderline personality disorder
instability in interpersonal relationships, self-image, and mood, as well as impulsivity; key features include intolerance of being alone and fear of abandonment, unstable relationships, unpredictable behavior and moods, and intense and inappropriate anger

personality disorder
group of DSM-5 disorders characterized by an inflexible and pervasive personality style that differs markedly from the expectations of one’s culture and causes distress and impairment; people with these disorders have a personality style that frequently brings them into conflict with others and disrupts their ability to develop and maintain social relationships

Personality Disorders by OpenStaxCollege is licensed under a Creative Commons Attribution 4.0 International License, except where otherwise noted.