During exercise, being appropriately hydrated contributes to performance. Water is needed to cool the body, transport oxygen and nutrients, and remove waste products from the muscles.  Water needs are increased during exercise due to the extra water losses through evaporation and sweat. Dehydration can occur when there is inadequate water levels in the body and can be very hazardous to the health of an individual. As the severity of dehydration increases, the exercise performance of an individual will begin to decline (see Figure 16.9 “Dehydration Effect on Exercise Performance”). It is important to continue to consume water before, during and after exercise to avoid dehydration as much as possible.

During exercise, thirst is not a reliable short term indicator of the body’s needs as it typically is not enough to replace the water loss. Even with the constant replenishing of water throughout an exercise, it may not be possible to drink enough water to compensate for the losses. Dehydration occurs when the total loss of water is so significant that the total blood volume decreases which leads to the reduction of oxygen and nutrients transported to the muscle cells. A decreased blood volume also reduces the blood flow to the skin and the production of sweat which can increase the body temperature. As a result, the risk of heat related illnesses increases.

Heat cramps are one of the heat related illnesses that can occur during or after exercise. Heat cramps are involuntary muscle spasms that usually involve the muscle being exercised, which causes by an imbalance of electrolytes, usually sodium.  Heat exhaustion is caused the the loss of water decreasing the blood volume so much that it is not possible to cool the body as well as provide oxygen and nutrients to the active muscles. Symptoms that arise from heat exhaustion may include low blood pressure, disorientation, profuse sweating, and fainting. Heat exhaustion can progress further if exercise continues into a heat stroke.  A heat stroke is the most serious form of heat related illnesses that can occur. During a heat stroke, the internal body temperature rises above 105℉ which causes the brain’s temperature-regulatory center to shut down. When the brain’s temperature regulatory center shuts down, an individual is unable to sweat regardless of their internal body temperature rising. Other symptoms that arise are dry skin, extreme confusion, and unconsciousness. A heat stroke requires immediate medical attention.

Sweating during exercise helps our bodies to stay cool. Sweat consists of mostly water but it also causes losses of sodium, potassium, calcium and magnesium. During most exercises, the amount of sodium lost is very small.Drinking water after completing an exercise will replenish the sodium in the body. However, during long endurance exercises such as a marathon or triathlon, sodium losses are larger and must be replenished as well. If water is replenished without sodium the sodium already in the body will become diluted. These low levels of sodium in the blood will cause a condition known as hyponatremia (see Figure 16.11 “The Effect of Exercise on Sodium Levels”). When sodium levels in the blood are decreased, water moves into the cell through osmosis which causes swelling. Accumulation of fluid in the lungs and the brain can cause serious life threatening conditions such as a seizure, coma and death.

In order to avoid hyponatremia, athletes should increase their consumption of sodium in the days leading up to an event and consume sodium-containing sports drinks during their race or game. The early signs of hyponatremia include nausea, muscle cramps, disorientation, and slurred speech.  To learn more about the sports drinks that can optimize your performance, refer back to Chapter 3, Water and Electrolytes.

Figure 16.11 The Effect of Exercise on Sodium Levels 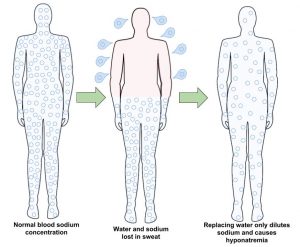