Data rarely fit a straight line exactly. Usually, you must be satisfied with rough
predictions. Typically, you have a set of data whose scatter plot appears to “fit” a
straight line. This is called a Line of Best Fit or Least-Squares Line.

If you know a person’s pinky (smallest) finger length, do you think you could predict that
person’s height? Collect data from your class (pinky finger length, in inches). The
independent variable, x, is pinky finger length and the dependent variable, y, is height. For each set of data, plot the points on graph paper. Make your graph big enough and use a ruler. Then “by eye” draw a line that appears to “fit” the data. For your line, pick two convenient points and use them to find the slope of the line. Find the y-intercept of the line by extending your line so it crosses the y-axis. Using the slopes and the y-intercepts, write your equation of “best fit.” Do you think everyone will have the same equation? Why or why not? According to your equation, what is the predicted height for a pinky length of 2.5 inches? 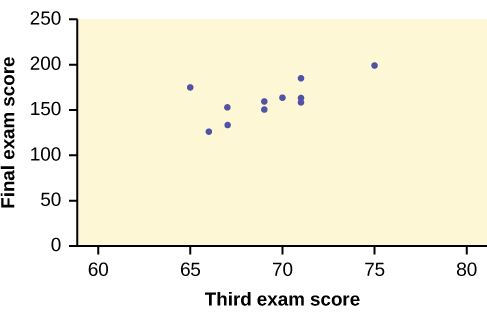 At 110 feet, a diver could dive for only five minutes.

Consider the following diagram. Each point of data is of the the form (x, y) and each point ofthe line of best fit using least-squares linear regression has the form (x, ŷ).

The ŷ is read “y hat” and is the estimated value of y. It is the value of y obtained using the regression line. It is not generally equal to y from data.

Each |ε| is a vertical distance.

This is called the Sum of Squared Errors (SSE).

THIRD EXAM vs FINAL EXAM EXAMPLE:
The graph of the line of best fit for the third-exam/final-exam example is as follows: 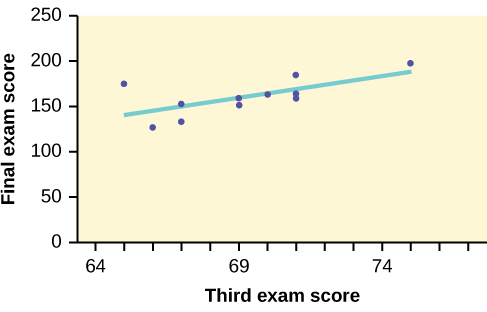 The least squares regression line (best-fit line) for the third-exam/final-exam example has the equation:

INTERPRETATION OF THE SLOPE: The slope of the best-fit line tells us how the dependent variable (y) changes for every one unit increase in the independent (x) variable, on average.

THIRD EXAM vs FINAL EXAM EXAMPLESlope: The slope of the line is b = 4.83.

Interpretation: For a one-point increase in the score on the third exam, the final exam score increases by 4.83 points, on average. 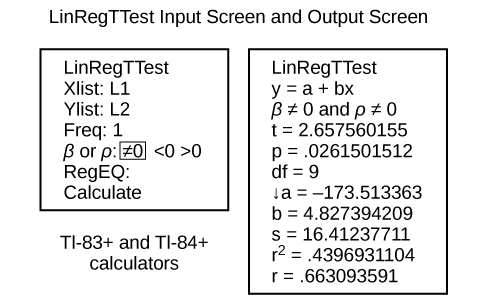 The output screen contains a lot of information. For now we will focus on a few items from the output, and will return later to the other items.

Graphing the Scatterplot and Regression Line

Another way to graph the line after you create a scatter plot is to use LinRegTTest.

Make sure you have done the scatter plot. Check it on your screen.
Go to LinRegTTest and enter the lists.
At RegEq: press VARS and arrow over to Y-VARS. Press 1 for 1:Function. Press 1 for 1:Y1. Then arrow down to Calculate and do the calculation for the line of best fit.
Press Y = (you will see the regression equation).
Press GRAPH. The line will be drawn.”

Besides looking at the scatter plot and seeing that a line seems reasonable, how can you tell if the line is a good predictor? Use the correlation coefficient as another indicator (besides the scatterplot) of the strength of the relationship between x and y.

The correlation coefficient, r, developed by Karl Pearson in the early 1900s, is numerical and provides a measure of strength and direction of the linear association between the independent variable x and the dependent variable y.

The correlation coefficient is calculated as

where n = the number of data points.

What the VALUE of r tells us:

The formula for r looks formidable. However, computer spreadsheets, statistical software, and many calculators can quickly calculate r. The correlation coefficient r is the bottom item in the output screens for the LinRegTTest on the TI-83, TI-83+, or TI-84+ calculator (see previous section for instructions).

The Coefficient of Determination

The variable r2 is called thecoefficient of determination and is the square of the correlation coefficient, but is usually stated as a percent, rather than in decimal form. It has an interpretation in the context of the data:

A regression line, or a line of best fit, can be drawn on a scatter plot and used to predict outcomes for the x and y variables in a given data set or sample data. There are several ways to find a regression line, but usually the least-squares regression line is used because it creates a uniform line. Residuals, also called “errors,” measure the distance from the actual value of y and the estimated value of y. The Sum of Squared Errors, when set to its minimum, calculates the points on the line of best fit. Regression lines can be used to predict values within the given set of data, but should not be used to make predictions for values outside the set of data.

The correlation coefficient r measures the strength of the linear association between x and y. The variable r has to be between –1 and +1. When r is positive, the x and y will tend to increase and decrease together. When r is negative, x will increase and y will decrease, or the opposite, x will decrease and y will increase. The coefficient of determination r2, is equal to the square of the correlation coefficient. When expressed as a percent, r2 represents the percent of variation in the dependent variable y that can be explained by variation in the independent variable x using the regression line.

Use the following information to answer the next five exercises. A random sample of ten professional athletes produced the following data where x is the number of endorsements the player has and y is the amount of money made (in millions of dollars).

Draw a scatter plot of the data.

Use regression to find the equation for the line of best fit.

Draw the line of best fit on the scatter plot.

What is the slope of the line of best fit? What does it represent?

The slope is 1.99 (b = 1.99). It means that for every endorsement deal a professional player gets, he gets an average of another 💲1.99 million in pay each year.

What is the y-intercept of the line of best fit? What does it represent?

What does an r value of zero mean?

It means that there is no correlation between the data sets.

Yes, there are enough data points and the value of r is strong enough to show that there is a strong negative correlation between the data sets.

What is the process through which we can calculate a line that goes through a scatter plot with a linear pattern?

Explain what it means when a correlation has an r2 of 0.72.

Can a coefficient of determination be negative? Why or why not?

where n is the number of data points. The coefficient cannot be more then 1 and less then –1. The closer the coefficient is to ±1, the stronger the evidence of a significant linear relationship between x and y.