Lipids are large molecules and generally are not water-soluble. Like carbohydrates and protein, lipids are broken into small components for absorption. Since most of our digestive enzymes are water-based, how does the body break down fat and make it available for the various functions it must perform in the human body?

The first step in the digestion of triglycerides and phospholipids begins in the mouth as lipids encounter saliva. Next, the physical action of chewing coupled with the action of emulsifiers enables the digestive enzymes to do their tasks. The enzyme lingual lipase, along with a small amount of phospholipid as an emulsifier, initiates the process of digestion. These actions cause the fats to become more accessible to the digestive enzymes. As a result, the fats become tiny droplets and separate from the watery components. 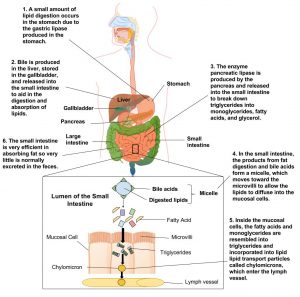 Going to the Bloodstream

As stomach contents enter the small intestine, the digestive system sets out to manage a small hurdle, namely, to combine the separated fats with its own watery fluids. The solution to this hurdle is bile. Bile contains bile salts, lecithin, and substances derived from cholesterol so it acts as an emulsifier. It attracts and holds onto fat while it is simultaneously attracted to and held on to by water. Emulsification increases the surface area of lipids over a thousand-fold, making them more accessible to the digestive enzymes.

Once the stomach contents have been emulsified, fat-breaking enzymes work on the triglycerides and diglycerides to sever fatty acids from their glycerol foundations. As pancreatic lipase enters the small intestine, it breaks down the fats into free fatty acids and monoglycerides. Yet again, another hurdle presents itself. How will the fats pass through the watery layer of mucus that coats the absorptive lining of the digestive tract? As before, the answer is bile. Bile salts envelop the fatty acids and monoglycerides to form micelles. Micelles have a fatty acid core with a water-soluble exterior. This allows efficient transportation to the intestinal microvillus. Here, the fat components are released and disseminated into the cells of the digestive tract lining.

Figure 5.12 Schematic Diagram Of A Chylomicron

Just as lipids require special handling in the digestive tract to move within a water-based environment, they require similar handling to travel in the bloodstream. Inside the intestinal cells, the monoglycerides and fatty acids reassemble themselves into triglycerides. Triglycerides, cholesterol, and phospholipids form lipoproteins when joined with a protein carrier. Lipoproteins have an inner core that is primarily made up of triglycerides and cholesterol esters (a cholesterol ester is a cholesterol linked to a fatty acid). The outer envelope is made of phospholipids interspersed with proteins and cholesterol. Together they form a chylomicron, which is a large lipoprotein that now enters the lymphatic system and will soon be released into the bloodstream via the jugular vein in the neck. Chylomicrons transport food fats perfectly through the body’s water-based environment to specific destinations such as the liver and other body tissues.

Cholesterols are poorly absorbed when compared to phospholipids and triglycerides. Cholesterol absorption is aided by an increase in dietary fat components and is hindered by high fiber content. This is the reason that a high intake of fiber is recommended to decrease blood cholesterol. Foods high in fiber such as fresh fruits, vegetables, and oats can bind bile salts and cholesterol, preventing their absorption and carrying them out of the colon.

If fats are not absorbed properly as is seen in some medical conditions, a person’s stool will contain high amounts of fat. If fat malabsorption persists the condition is known as steatorrhea. Steatorrhea can result from diseases that affect absorption, such as Crohn’s disease and cystic fibrosis. 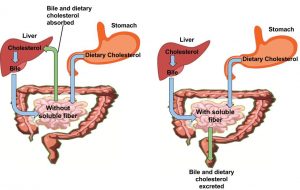 The Truth about Storing and Using Body Fat

Before the prepackaged food industry, fitness centers, and weight-loss programs, our ancestors worked hard to even locate a meal. They made plans, not for losing those last ten pounds to fit into a bathing suit for vacation, but rather for finding food. Today, this is why we can go long periods without eating, whether we are sick with a vanished appetite, our physical activity level has increased, or there is simply no food available. Our bodies reserve fuel for a rainy day.

One way the body stores fat was previously touched upon in the Carbohydrates chapter. The body transforms carbohydrates into glycogen that is in turn stored in the muscles for energy. When the muscles reach their capacity for glycogen storage, the excess is returned to the liver, where it is converted into triglycerides and then stored as fat.

In a similar manner, much of the triglycerides the body receives from food is transported to fat storehouses within the body if not used for producing energy. The chylomicrons are responsible for shuttling the triglycerides to various locations such as the muscles, breasts, external layers under the skin, and internal fat layers of the abdomen, thighs, and buttocks where they are stored by the body in adipose tissue for future use. How is this accomplished? Recall that chylomicrons are large lipoproteins that contain a triglyceride and fatty-acid core. Capillary walls contain an enzyme called lipoprotein-lipase that dismantles the triglycerides in the lipoproteins into fatty acids and glycerol, thus enabling these to enter into the adipose cells. Once inside the adipose cells, the fatty acids and glycerol are reassembled into triglycerides and stored for later use. Muscle cells may also take up the fatty acids and use them for muscular work and generating energy. When a person’s energy requirements exceed the amount of available fuel presented from a recent meal or extended physical activity has exhausted glycogen energy reserves, fat reserves are retrieved for energy utilization.

As the body calls for additional energy, the adipose tissue responds by dismantling its triglycerides and dispensing glycerol and fatty acids directly into the blood. Upon receipt of these substances the energy-hungry cells break them down further into tiny fragments. These fragments go through a series of chemical reactions that yield energy, carbon dioxide, and water.

Recall that chylomicrons are transporters of fats throughout the watery environment within the body. After about ten hours of circulating throughout the body, chylomicrons gradually release their triglycerides until all that is left of their composition is cholesterol-rich remnants. These remnants are used as raw materials by the liver to formulate specific lipoproteins. Following is a list of the various lipoproteins and their functions: 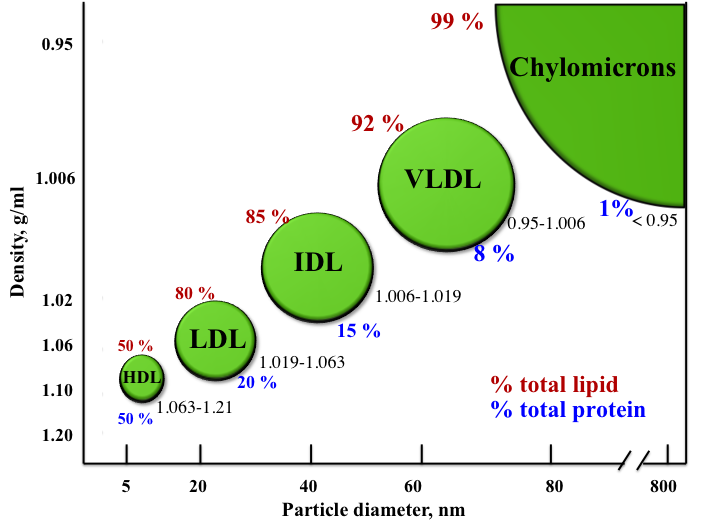 The classification of the major types of lipoproteins are based on their densities. Density range is shown as well as lipid (red) and protein (blue) content. (Diagram not to scale) / CC BY 3.0

For healthy total blood cholesterol, the desired range you would want to maintain is under 200 mg/dL. More specifically, when looking at individual lipid profiles, a low amount of LDL and a high amount of HDL prevents excess buildup of cholesterol in the arteries and wards off potential health hazards. An LDL level of less than 100 milligrams per deciliter is ideal while an LDL level above 160 mg/dL would be considered high. In contrast, a low value of HDL is a telltale sign that a person is living with major risks for disease. Values of less than 40 mg/dL for men and 50 mg/dL for women mark a risk factor for developing heart disease. In short, elevated LDL blood lipid profiles indicate an increased risk of heart attack, while elevated HDL blood lipid profiles indicate a reduced risk.The University of Maryland Medical Center reports that omega-3 fatty acids promote lower total cholesterol and lower triglycerides in people with high cholesterol.[1]