A typical human cannot survive without breathing for more than 3 minutes, and even if you wanted to hold your breath longer, your autonomic nervous system would take control. This is because cells need to maintain oxidative metabolism for energy production that continuously regenerates adenosine triphosphate (ATP). For oxidative phosphorylation to occur, oxygen is used as a reactant and carbon dioxide is released as a waste product. You may be surprised to learn that although oxygen is a critical need for cells, it is actually the accumulation of carbon dioxide that primarily drives your need to breathe. Carbon dioxide is exhaled and oxygen is inhaled through the respiratory system, which includes muscles to move air into and out of the lungs, passageways through which air moves, and microscopic gas exchange surfaces covered by capillaries. The cardiovascular system transports gases from the lungs to tissues throughout the body and vice versa. A variety of diseases can affect the respiratory system, such as asthma, emphysema, chronic obstructive pulmonary disorder (COPD), and lung cancer. All of these conditions affect the gas exchange process and result in labored breathing and other difficulties.

The major organs of the respiratory system function primarily to provide oxygen to body tissues for cellular respiration, remove the waste product carbon dioxide, and help to maintain acid-base balance. Portions of the respiratory system are also used for non-vital functions, such as sensing odors, producing speech, and for straining, such as during childbirth or coughing. 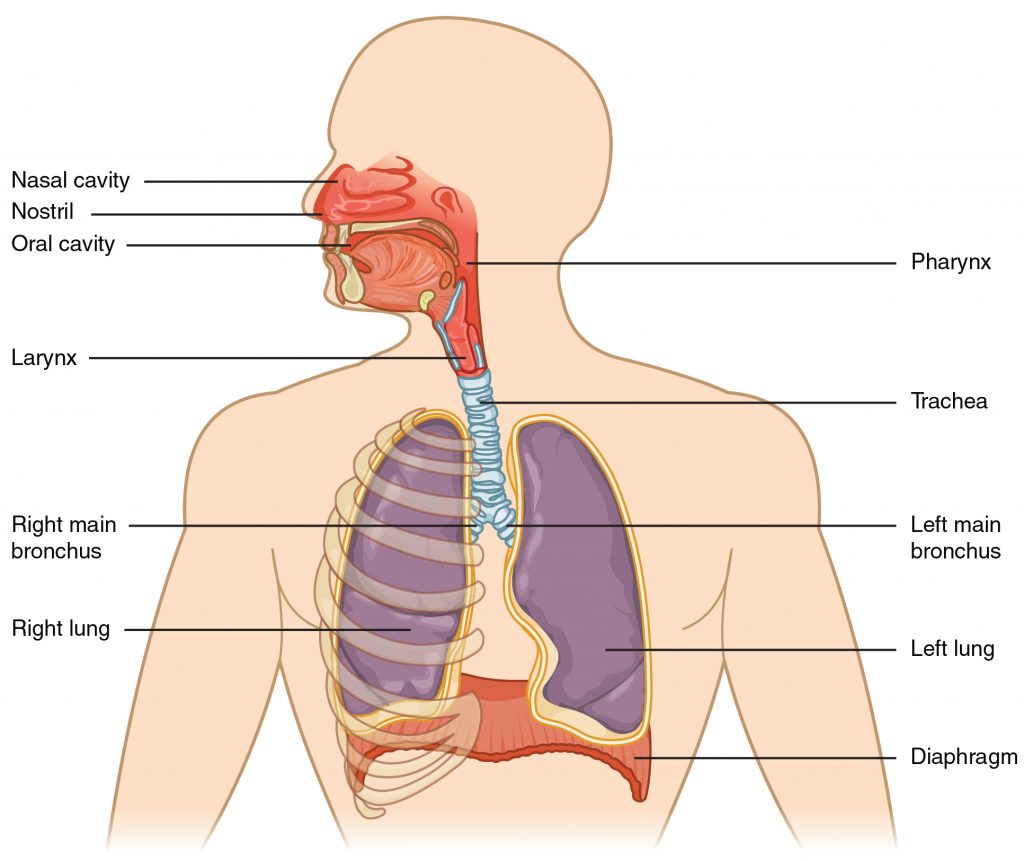 In contrast to the conducting zone, the respiratory zone includes structures that are directly involved in gas exchange. The respiratory zone begins where the terminal bronchioles join a respiratory bronchiole, the smallest type of bronchiole (Figure 2.16 “Respiratory Zone”), which then leads to an alveolar duct, opening into a cluster of alveoli.

An alveolar duct is a tube composed of smooth muscle and connective tissue, which opens into a cluster of alveoli. An alveolus is one of the many small, grape-like sacs that are attached to the alveolar ducts.

An alveolar sac is a cluster of many individual alveoli that are responsible for gas exchange. An alveolus is approximately 200 μm in diameter with elastic walls that allow the alveolus to stretch during air intake, which greatly increases the surface area available for gas exchange. Alveoli are connected to their neighbors by alveolar pores, which help maintain equal air pressure throughout the alveoli and lung. 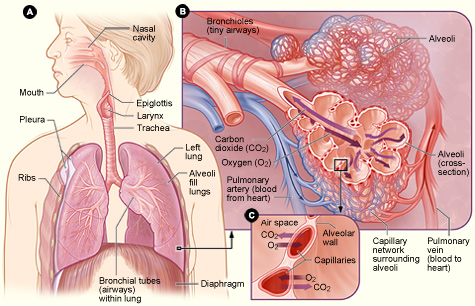 Figure 2.17 shows the location of the respiratory structures in the body. Figure B is an enlarged view of the airways, alveoli (air sacs), and capillaries (tiny blood vessels). Figure C is a close-up view of gas exchange between the capillaries and alveoli. CO2 is carbon dioxide, and O2 is oxygen.

A major organ of the respiratory system, each lung houses structures of both the conducting and respiratory zones. The main function of the lungs is to perform the exchange of oxygen and carbon dioxide with air from the atmosphere. To this end, the lungs exchange respiratory gases across a very large epithelial surface area—about 70 square meters—that is highly permeable to gases.

Gross Anatomy of the Lungs

The lungs are pyramid-shaped, paired organs that are connected to the trachea by the right and left bronchi; below the lungs is the diaphragm, a flat, dome-shaped muscle located at the base of the lungs and thoracic cavity.

Figure 2.18 Basic Anatomy of the Lungs 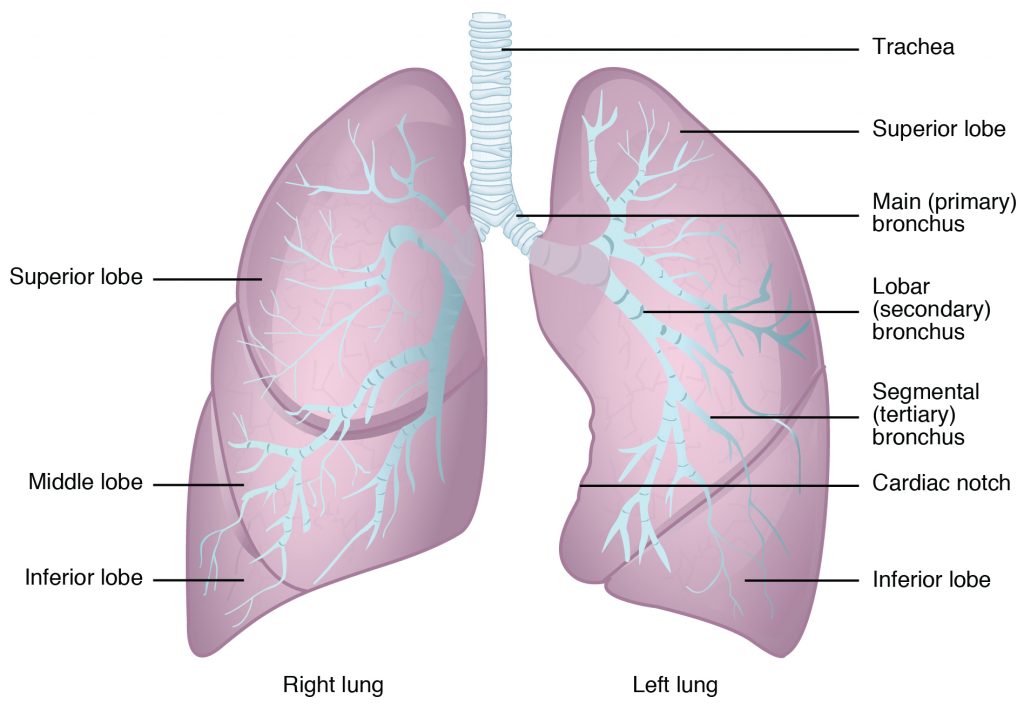 The major function of the lungs is to perform gas exchange, which requires blood flowing through the lung tissues (the pulmonary circulation). This blood supply contains deoxygenated blood and travels to the lungs where erythrocytes, also known as red blood cells, pick up oxygen to be transported to tissues throughout the body. The pulmonary artery carries deoxygenated blood to the lungs. The pulmonary artery branches multiple times as it follows the bronchi, and each branch becomes progressively smaller in diameter down to the tiny capillaries where the alveoli release carbon dioxide from blood into the lungs to be exhaled and take up oxygen from inhaled air to oxygenate the blood. Once the blood is oxygenated, it drains from the alveoli by way of multiple pulmonary veins that exit the lungs to carry oxygen to the rest of the body.