Water is made up of 2 hydrogen atoms and 1 oxygen atom (Figure 3.1 “The Water Molecule”). A human body is made up of mostly water. An adult consists of about 37 to 42 liters of water, or about eighty pounds. Fortunately, humans have compartmentalized tissues; otherwise we might just look like a water balloon! Newborns are approximately 70 percent water. Adult males typically are composed of about 60 percent water and females are about 55 percent water. (This gender difference reflects the differences in body-fat content, since body fat is practically water-free. This also means that if a person gains weight in the form of fat the percentage of total body water content declines.) As we age, total body water content also diminishes so that by the time we are in our eighties the percent of water in our bodies has decreased to around 45 percent. Does the loss in body water play a role in the aging process? Alas, no one knows. But, we do know that dehydration accelerates the aging process whereas keeping hydrated decreases headaches, muscle aches, and kidney stones. Additionally a study conducted at the Fred Hutchinson Cancer Research Center in Seattle found that women who drank more than five glasses of water each day had a significantly decreased risk for developing colon cancer.[1]

Although water makes up the largest percentage of body volume, it is not actually pure water but rather a mixture of cells, proteins, glucose, lipoproteins, electrolytes, and other substances. Electrolytes are substances that, when dissolved in water, dissociate into charged ions. Positively charged electrolytes are called cations and negatively charged electrolytes are called anions. For example, in water sodium chloride (the chemical name for table salt) dissociates into sodium cations (Na+) and chloride anions (Cl−). Solutes refers to all dissolved substances in a fluid, which may be charged, such as sodium (Na+), or uncharged, such as glucose. In the human body, water and solutes are distributed into two compartments: inside cells, called intracellular, and outside cells, called extracellular. The extracellular water compartment is subdivided into the spaces between cells also known as interstitial, blood plasma, and other bodily fluids such as the cerebrospinal fluid which surrounds and protects the brain and spinal cord (Figure 3.2 “Distribution of Body Water”). The composition of solutes differs between the fluid compartments. For instance, more protein is inside cells than outside and more chloride anions exist outside of cells than inside. 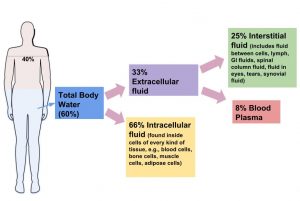 One of the essential homeostatic functions of the body is to maintain fluid balance and the differences in solute composition between cells and their surrounding environment. Osmoregulation is the control of fluid balance and composition in the body. The processes involved keep fluids from becoming too dilute or too concentrated. Fluid compartments are separated by selectively permeable membranes, which allow some things, such as water, to move through while other substances require special transport proteins, channels, and often energy. The movement of water between fluid compartments happens by osmosis, which is simply the movement of water through a selectively permeable membrane from an area where it is highly concentrated to an area where it is not so concentrated. Water is never transported actively; that is, it never takes energy for water to move between compartments. Although cells do not directly control water movement, they do control movement of electrolytes and other solutes and thus indirectly regulate water movement by controlling where there will be regions of high and low concentrations.

Cells maintain their water volume at a constant level, but the composition of solutes in a cell is in a continuous state of flux. This is because cells are bringing nutrients in, metabolizing them, and disposing of waste products. To maintain water balance a cell controls the movement of electrolytes to keep the total number of dissolved particles, called osmolality the same inside and outside (Figure 3.3 “Osmoregulation”). The total number of dissolved substances is the same inside and outside a cell, but the composition of the fluids differs between compartments. For example, sodium exists in extracellular fluid at fourteen times the concentration as compared to that inside a cell.