Chapter 13. Lifespan Nutrition From Pregnancy to the Toddler Years 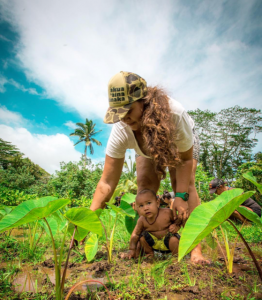 By the end of this chapter you will be able to:

Human bodies change significantly over time, and food is the fuel for those changes. For example, for Native Hawaiians, expecting mothers were encouraged to eat greens like the lu‘au (young taro leaves) and palula (young sweet potato leaves) to encourage a healthy, strong baby.  These beliefs and customs practiced in the early stages of life were done in hopes of building a firm foundation and setting up lifelong health[1].

People of all ages need the same basic nutrients—essential amino acids, carbohydrates, essential fatty acids, and twenty-eight vitamins and minerals—to sustain life and health. However, the amounts of nutrients needed differ. Throughout the human life cycle, the body constantly changes and goes through different periods known as stages. This chapter will focus on pregnancy, infancy and the toddler years. Chapter 14 will focus on childhood through adolescence and Chapter 15 will focus on the stages of adulthood. The major stages of the human life cycle are defined as follows:

We begin with pregnancy, a developmental marathon that lasts about forty weeks. It begins with the first trimester (weeks one to week twelve), extends into the second trimester (weeks thirteen to week twenty-seven), and ends with the third trimester (week twenty-eight to birth). At conception, a sperm cell fertilizes an egg cell, creating a zygote. The zygote rapidly divides into multiple cells to become an embryo and implants itself in the uterine wall, where it develops into a fetus. Some of the major changes that occur include the branching of nerve cells to form primitive neural pathways at eight weeks. At the twenty-week mark, physicians typically perform an ultrasound to acquire information about the fetus and check for abnormalities. By this time, it is possible to know the sex of the baby. At twenty-eight weeks, the unborn baby begins to add body fat in preparation for life outside of the womb[2].

Throughout this entire process, a pregnant woman’s nutritional choices affect not only fetal development, but also her own health and the future health of her newborn.