When you studied fractions, you had lots of different ways to think about them.  But the first way, and the one we keep coming back to, is to think of a fraction as the answer to a division problem.

Suppose 6 pies are to be shared equally among 3 children. This yields 2 pies per child. We write:

is equivalent to the answer to the division problem

.  It represents the number of pies one whole child receives.

In the same way…

pies per kid, and

the answer to sharing 1 pies among 2 children is

We associate the number “

In the same way, the picture

represents “one third,” that is,

(This is the amount of pie an individual child would receive if one pie is shared among three children.)

is called “one fifth” and is indeed

, the amount of pie an individual child receives when one pie is shared by five kids.

is called “three fifths” to represent

, the amount of pie an individual receives if three pies are shared by five kids.

We know how to do division in our “Dots & Boxes” model.

Suppose you are asked to compute

. One way to interpret this question (there are others) is: 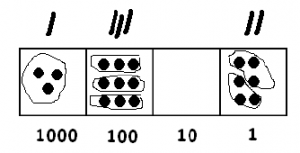 Of course, not every division problem works out evenly!  Here’s a different example.

Suppose you are asked to compute

. One way to interpret this question is:

So we’re looking for groups of three dots in this picture:

One group of three is easy to spot:

To find more groups of three dots, we must “unexplode” a dot:

We need to unexplode again:

This leaves one stubborn dot remaining in the ones box and no more group of three. So we conclude:

We can put these two ideas together — fractions as the answer to a division problem and what we know about division in the “Dots & Boxes” model —  to help us think more about the connection between fractions and decimals.

is the result of dividing 1 by 8. Let’s actually compute

in a “Dots & Boxes” model, making use of decimals.  We want to find groups of eight in the following picture:

Clearly none are to be found, so let’s unexplode:

(We’re being lazy and not drawing all the dots.  As you follow along, you might want to draw the dots rather than the number of dots, if it helps you keep track.)

Now there is one group of 8, leaving two behind.  We write a tick-mark on top, to keep track of the number of groups of 8, and leave two dots behind in the box.

We can unexplode the two dots in the

Now we have five groups of 8 and no remainder.

Remember: the tick marks kept track of how many groups of eight there were in each box.  We have

So we conclude that:

Of course, it’s a good habit to check our answer:

Work on the following exercises on your own or with a partner.  Be sure to show your work.

Not all fractions lead to simple decimal representations.

. We seek groups of three in the following picture:

Unexploding requires us to look for groups of 3 in:

Here there are three groups of 3 leaving one behind:

We find another three groups of 3 leaving one behind:

And  we seem to be caught in an infinitely repeating cycle.

We are now in a philosophically interesting position. As human beings, we cannot conduct this, or any, activity an infinite number of times.  But it seems very tempting to write:

” meaning  “keep going forever with this pattern.”  We can imagine what this means, but we cannot actually write down those infinitely many 3’s represented by the

Many people make use of a vinculum (horizontal bar) to represent infinitely long repeating decimals.  For example,

.  In the example above, we found the answer to be

But now we know we can keep dividing that last stubborn dot by 3.  Remember, that  represents a single dot in the ones place, so if we keep dividing by three it really represents

As another (more complicated) example, here is the work that converts the fraction

to an infinitely long repeating decimal.  Make sure to understand the steps one line to the next.

With this 6 in the final right-most box, we have returned to the very beginning of the problem.  (Do you see why?  Remember, we started with a six in the ones box!)

This means that we will simply repeat the work we have done and obtain the same sequence of answers:

Work on the following exercises on your own or with a partner.  Be sure to show your work.