Our number system is a western adaptation of the Hindu-Arabic numeral system developed somewhere between the first and fourth centuries AD.  However, numbers have been recorded with tally marks throughout history.  The Ishango Bone[1] from Africa is about 25,000 years old. It’s the lower leg bone from a baboon, and contains tally marks. We know the marks were used for counting because they appear in distinct groups. 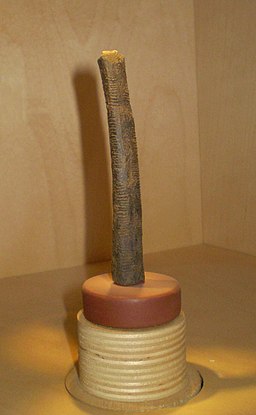 This reindeer antler[2] from France is about 15,000 years old, and also shows clearly grouped tally marks.

Of course, we still use tally marks today![3]

The positional value of each symbol depends on its position in the number:

The value of a number is the sum of the positional values of its digits.

The ancient Romans used a version of an additive number systems. The Romans represented numbers this way:

For any additive number system very large numbers become impractical to write. To represent the number one million in Roman numerals it would take one thousand M’s!

However, the Roman numerals did have one efficiency advantage: The order of the symbols mattered. If a symbol to the left was smaller than the symbol to the right, it would be subtracted instead of added. So for example nine is represented as IX rather than VIIII.

If you don’t already know how to use Roman numerals, research it a little bit.  Then answer these questions.

The earliest positional number systems are attributed to the Babylonians (base 60) and the Mayans (base 20). These positional systems were both developed before they had a symbol or a clear concept for zero. Instead of using 0, a blank space was used to indicate skipping a particular place value. This could lead to ambiguity.

Suppose we didn’t have a symbol for 0, and someone wrote the number

Leonardo Pisano Bigollo, more commonly known as Fibonacci[4], played a pivotal role in guiding Europe out of a long period in which the importance and development of math was in marked decline. He was born in Italy around 1170 CE to Guglielmo Bonacci, a successful merchant. Guglielmo brought his son with him to what is now Algeria, and Leonardo was educated in mathematics mathematics there.

At the time, Roman Numerals dominated Europe, and the official means of calculations was the abacus. Muḥammad ibn Mūsā al-Khwārizmī[5] described the use of Hindu-Arabic system in his book On the Calculation with Hindu Numerals in 825 CE, but it was not well-known in Europe.

Fibonacci’s book Liber Abaci described the Hindu-Arabic system and its business applications for a European readership. His book was well-received throughout Europe, and it marked the beginning of a reawakening of European mathematics.

There is evidence that pre-contact Hawaiians actually used two different number systems.  Depending on what they were counting, they might use base 4 instead (or a mixed base-10 and base-4 system).  One theory is that certain objects (fish, taro, etc.) were often put in bundles of 4, so were more natural to count by 4’s than by 10’s.  The number four also had spiritual significance in Hawaiian culture.

Here are a few examples (refer to the table above for the Hawaiian names of the numbers):

would be ‘ekahi mano, ‘ekolu lau me ‘ehiku

1. Translate this Hawaiian number to English and then write it in base ten.

2.  Translate this base‐ten number to Hawaiian.

How is learning about different number systems (including representing numbers in different bases) valuable to you as a future teacher?