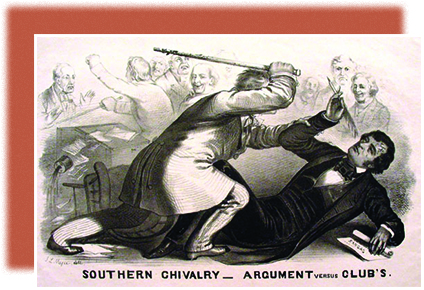 The heated sectional controversy between the North and the South reached new levels of intensity in the 1850s. Southerners and northerners grew ever more antagonistic as they debated the expansion of slavery in the West. The notorious confrontation between Representative Preston Brooks of South Carolina and Massachusetts senator Charles Sumner depicted in the image above ([link]), illustrates the contempt between extremists on both sides. The “Caning of Sumner” in May 1856 followed upon a speech given by Sumner two days earlier in which he condemned slavery in no uncertain terms, declaring: “[Admitting Kansas as a slave state] is the rape of a virgin territory, compelling it to the hateful embrace of slavery; and it may be clearly traced to a depraved longing for a new slave state, the hideous offspring of such a crime, in the hope of adding to the power of slavery in the national government.” Sumner criticized proslavery legislators, particularly attacking a fellow senator and relative of Preston Brooks. Brooks responded by beating Sumner with a cane, a thrashing that southerners celebrated as a manly defense of gentlemanly honor and their way of life. The episode highlights the violent clash between pro- and antislavery factions in the 1850s, a conflict that would eventually lead to the traumatic unraveling of American democracy and civil war.