John Trumbull, Washington’s aide-de-camp, painted this wartime image of Washington on a promontory above the Hudson River. Just behind Washington, his slave William “Billy” Lee has his eyes firmly fixed on his master. In the far background, British warships fire on an American fort. 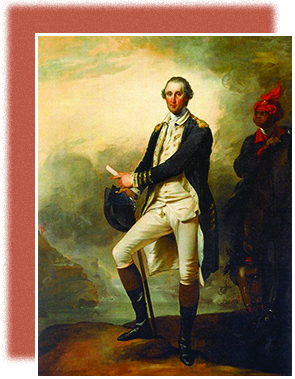 After the Revolutionary War, the ideology that “all men are created equal” failed to match up with reality, as the revolutionary generation could not solve the contradictions of freedom and slavery in the new United States. Trumbull’s 1780 painting of George Washington ([link]) hints at some of these contradictions. What attitude do you think Trumbull was trying to convey? Why did Trumbull include Washington’s slave Billy Lee, and what does Lee represent in this painting?

During the 1770s and 1780s, Americans took bold steps to define American equality. Each state held constitutional conventions and crafted state constitutions that defined how government would operate and who could participate in political life. Many elite revolutionaries recoiled in horror from the idea of majority rule—the basic principle of democracy—fearing that it would effectively create a “mob rule” that would bring about the ruin of the hard-fought struggle for independence. Statesmen everywhere believed that a republic should replace the British monarchy: a government where the important affairs would be entrusted only to representative men of learning and refinement.