Women took part in all the antebellum reforms, from transcendentalism to temperance to abolition. In many ways, traditional views of women as nurturers played a role in encouraging their participation. Women who joined the cause of temperance, for example, amplified their accepted role as moral guardians of the home. Some women advocated a much more expansive role for themselves and their peers by educating children and men in solid republican principles. But it was their work in antislavery efforts that served as a springboard for women to take action against gender inequality. Many, especially northern women, came to the conclusion that they, like slaves, were held in shackles in a society dominated by men.

Despite the radical nature of their effort to end slavery and create a biracial society, most abolitionist men clung to traditional notions of proper gender roles. White and black women, as well as free black men, were forbidden from occupying leadership positions in the AASS. Because women were not allowed to join the men in playing leading roles in the organization, they formed separate societies, such as the Boston Female Anti-Slavery Society, the Philadelphia Female Anti-Slavery Society, and similar groups.

Two leading abolitionist women, Sarah and Angelina Grimké, played major roles in combining the fight to end slavery with the struggle to achieve female equality. The sisters had been born into a prosperous slaveholding family in South Carolina. Both were caught up in the religious fervor of the Second Great Awakening, and they moved to the North and converted to Quakerism.

In the mid-1830s, the sisters joined the abolitionist movement, and in 1837, they embarked on a public lecture tour, speaking about immediate abolition to “promiscuous assemblies,” that is, to audiences of women and men. This public action thoroughly scandalized respectable society, where it was unheard of for women to lecture to men. William Lloyd Garrison endorsed the Grimké sisters’ public lectures, but other abolitionists did not. Their lecture tour served as a turning point; the reaction against them propelled the question of women’s proper sphere in society to the forefront of public debate.

THE DECLARATION OF RIGHTS AND SENTIMENTS

Participation in the abolitionist movement led some women to embrace feminism, the advocacy of women’s rights. Lydia Maria Child, an abolitionist and feminist, observed, “The comparison between women and the colored race is striking . . . both have been kept in subjection by physical force.” Other women, including Elizabeth Cady Stanton, Lucy Stone, and Susan B. Anthony, agreed ([link]).

Elizabeth Cady Stanton (a) and Lucretia Mott (b) both emerged from the abolitionist movement as strong advocates of women’s rights. 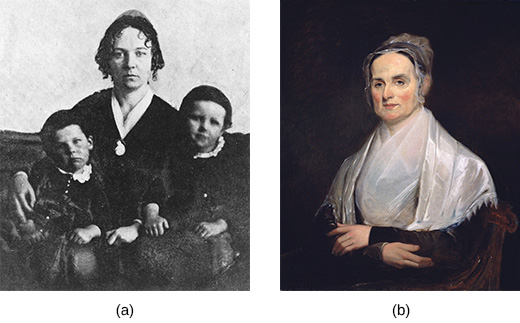 In 1848, about three hundred male and female feminists, many of them veterans of the abolition campaign, gathered at the Seneca Falls Convention in New York for a conference on women’s rights that was organized by Lucretia Mott and Elizabeth Cady Stanton. It was the first of what became annual meetings that have continued to the present day. Attendees agreed to a “Declaration of Rights and Sentiments” based on the Declaration of Independence; it declared, “We hold these truths to be self-evident: that all men and women are created equal; that they are endowed by their Creator with certain inalienable rights; that among these are life, liberty, and the pursuit of happiness.” “The history of mankind,” the document continued, “is a history of repeated injuries and usurpations on the part of man toward woman, having in direct object the establishment of an absolute tyranny over her.”

Read the entire text of the Declaration of Rights and Sentiments in the Internet Modern History Sourcebook at Fordham University.

REPUBLICAN MOTHERHOOD IN THE ANTEBELLUM YEARS

Some northern female reformers saw new and vital roles for their sex in the realm of education. They believed in traditional gender roles, viewing women as inherently more moral and nurturing than men. Because of these attributes, the feminists argued, women were uniquely qualified to take up the roles of educators of children.

Catharine Beecher, the daughter of Lyman Beecher, pushed for women’s roles as educators. In her 1845 book, The Duty of American Women to Their Country, she argued that the United States had lost its moral compass due to democratic excess. Both “intelligence and virtue” were imperiled in an age of riots and disorder. Women, she argued, could restore the moral center by instilling in children a sense of right and wrong. Beecher represented a northern, middle-class female sensibility. The home, especially the parlor, became the site of northern female authority.

The spirit of religious awakening and reform in the antebellum era impacted women lives by allowing them to think about their lives and their society in new and empowering ways. Of all the various antebellum reforms, however, abolition played a significant role in generating the early feminist movement in the United States. Although this early phase of American feminism did not lead to political rights for women, it began the long process of overcoming gender inequalities in the republic.

Why did William Lloyd Garrison’s endorsement of the Grimké sisters divide the abolitionist movement?

Which female reformer focused on women’s roles as the educators of children?

How did the abolitionist movement impact the women’s movement?

In what ways did the Second Great Awakening and transcendentalism reflect and react to the changes in antebellum American thought and culture?

What did the antebellum communal projects have in common? How did the ones most influenced by religion differ from those that had other influences?

In what ways do temperance, health reforms, and phrenology offer reflections on the changes in the United States before the Civil War? What needs did these reforms fill in the lives of antebellum Americans?

Of the various approaches to the problem of slavery, which one do you find to be the most effective and why?

Women’s Rights by OpenStaxCollege is licensed under a Creative Commons Attribution 4.0 International License, except where otherwise noted.