“The happy Effects of the Grand Systom [sic] of shutting Ports against the English!!” appeared in 1808. Less than a year earlier, Thomas Jefferson had recommended (and Congress had passed) the Embargo Act of 1807, which barred American ships from leaving their ports. 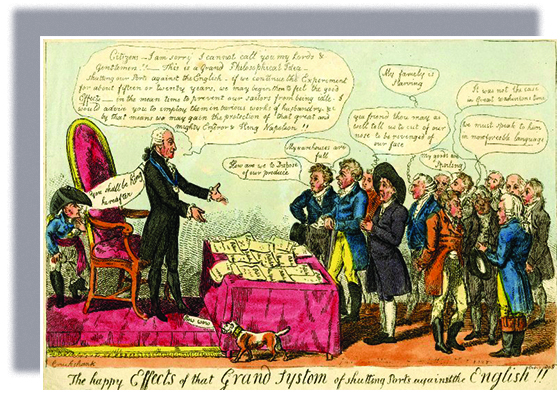 The partisan political cartoon above ([link]) lampoons Thomas Jefferson’s 1807 Embargo Act, a move that had a devastating effect on American commerce. American farmers and merchants complain to President Jefferson, while the French emperor Napoleon Bonaparte whispers to him, “You shall be King hereafter.” This image illustrates one of many political struggles in the years after the fight for ratification of the Constitution. In the nation’s first few years, no organized political parties existed. This began to change as U.S. citizens argued bitterly about the proper size and scope of the new national government. As a result, the 1790s witnessed the rise of opposing political parties: the Federalists and the Democratic-Republicans. Federalists saw unchecked democracy as a dire threat to the republic, and they pointed to the excesses of the French Revolution as proof of what awaited. Democratic-Republicans opposed the Federalists’ notion that only the wellborn and well educated were able to oversee the republic; they saw it as a pathway to oppression by an aristocracy.