To some observers, the rise of democracy in the United States raised troubling questions about the new power of the majority to silence minority opinion. As the will of the majority became the rule of the day, everyone outside of mainstream, white American opinion, especially Indians and blacks, were vulnerable to the wrath of the majority. Some worried that the rights of those who opposed the will of the majority would never be safe. Mass democracy also shaped political campaigns as never before. The 1840 presidential election marked a significant turning point in the evolving style of American democratic politics.

Perhaps the most insightful commentator on American democracy was the young French aristocrat Alexis de Tocqueville, whom the French government sent to the United States to report on American prison reforms ([link]). Tocqueville marveled at the spirit of democracy that pervaded American life. Given his place in French society, however, much of what he saw of American democracy caused him concern.

Alexis de Tocqueville is best known for his insightful commentary on American democracy found in De la démocratie en Amérique. The first volume of Tocqueville’s two-volume work was immediately popular throughout Europe. The first English translation, by Henry Reeve and titled Democracy in America (a), was published in New York in 1838. Théodore Chassériau painted this portrait of Alexis de Tocqueville in 1850 (b). 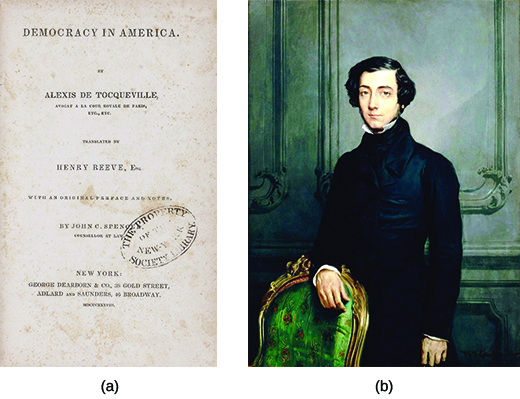 Tocqueville’s experience led him to believe that democracy was an unstoppable force that would one day overthrow monarchy around the world. He wrote and published his findings in 1835 and 1840 in a two-part work entitled Democracy in America. In analyzing the democratic revolution in the United States, he wrote that the major benefit of democracy came in the form of equality before the law. A great deal of the social revolution of democracy, however, carried negative consequences. Indeed, Tocqueville described a new type of tyranny, the tyranny of the majority, which overpowers the will of minorities and individuals and was, in his view, unleashed by democracy in the United States.

In this excerpt from Democracy in America, Alexis de Tocqueville warns of the dangers of democracy when the majority will can turn to tyranny:

The authority of a king is purely physical, and it controls the actions of the subject without subduing his private will; but the majority possesses a power which is physical and moral at the same time; it acts upon the will as well as upon the actions of men, and it represses not only all contest, but all controversy. I know no country in which there is so little true independence of mind and freedom of discussion as in America.

Take the Alexis de Tocqueville Tour to experience nineteenth-century America as Tocqueville did, by reading his journal entries about the states and territories he visited with fellow countryman Gustave de Beaumont. What regional differences can you draw from his descriptions?

The presidential election contest of 1840 marked the culmination of the democratic revolution that swept the United States. By this time, the second party system had taken hold, a system whereby the older Federalist and Democratic-Republican Parties had been replaced by the new Democratic and Whig Parties. Both Whigs and Democrats jockeyed for election victories and commanded the steady loyalty of political partisans. Large-scale presidential campaign rallies and emotional propaganda became the order of the day. Voter turnout increased dramatically under the second party system. Roughly 25 percent of eligible voters had cast ballots in 1828. In 1840, voter participation surged to nearly 80 percent.

The differences between the parties were largely about economic policies. Whigs advocated accelerated economic growth, often endorsing federal government projects to achieve that goal. Democrats did not view the federal government as an engine promoting economic growth and advocated a smaller role for the national government. The membership of the parties also differed: Whigs tended to be wealthier; they were prominent planters in the South and wealthy urban northerners—in other words, the beneficiaries of the market revolution. Democrats presented themselves as defenders of the common people against the elite.

In the 1840 presidential campaign, taking their cue from the Democrats who had lionized Jackson’s military accomplishments, the Whigs promoted William Henry Harrison as a war hero based on his 1811 military service against the Shawnee chief Tecumseh at the Battle of Tippecanoe. John Tyler of Virginia ran as the vice presidential candidate, leading the Whigs to trumpet, “Tippecanoe and Tyler too!” as a campaign slogan.

The campaign thrust Harrison into the national spotlight. Democrats tried to discredit him by declaring, “Give him a barrel of hard [alcoholic] cider and settle a pension of two thousand a year on him, and take my word for it, he will sit the remainder of his days in his log cabin.” The Whigs turned the slur to their advantage by presenting Harrison as a man of the people who had been born in a log cabin (in fact, he came from a privileged background in Virginia), and the contest became known as the log cabin campaign ([link]). At Whig political rallies, the faithful were treated to whiskey made by the E. C. Booz Company, leading to the introduction of the word “booze” into the American lexicon. Tippecanoe Clubs, where booze flowed freely, helped in the marketing of the Whig candidate.

The Whig campaign song “Tippecanoe and Tyler Too!” (a) and the anti-Whig flyers (b) that were circulated in response to the “log cabin campaign” illustrate the partisan fervor of the 1840 election. 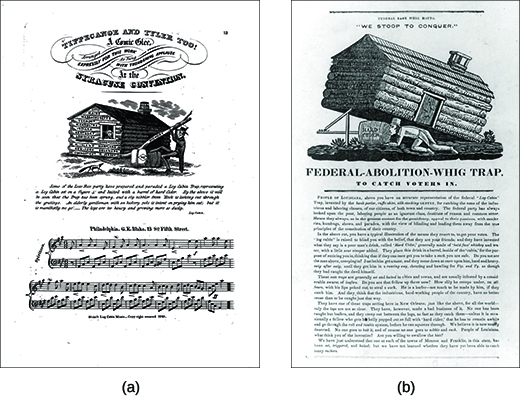 The Whigs’ efforts, combined with their strategy of blaming Democrats for the lingering economic collapse that began with the hard-currency Panic of 1837, succeeded in carrying the day. A mass campaign with political rallies and party mobilization had molded a candidate to fit an ideal palatable to a majority of American voters, and in 1840 Harrison won what many consider the first modern election.

American culture of the 1830s reflected the rise of democracy. The majority exercised a new type of power that went well beyond politics, leading Alexis de Tocqueville to write about the “tyranny of the majority.” Very quickly, politicians among the Whigs and Democrats learned to master the magic of the many by presenting candidates and policies that catered to the will of the majority. In the 1840 “log cabin campaign,” both sides engaged in the new democratic electioneering. The uninhibited expression during the campaign inaugurated a new political style.

a Democrat
a Democratic-Republican
an Anti-Federalist
a Whig

Which of the following did not characterize political changes in the 1830s?

How did Alexis de Tocqueville react to his visit to the United States? What impressed and what worried him?

Tocqueville came to believe that democracy was an unstoppable force whose major benefit was equality before the law. However, he also described the tyranny of the majority, which overpowers the will of minorities and individuals.

What were some of the social and cultural beliefs that became widespread during the Age of Jackson? What lay behind these beliefs, and do you observe any of them in American culture today?

Were the political changes of the early nineteenth century positive or negative? Explain your opinion.

Does Alexis de Tocqueville’s argument about the tyranny of the majority reflect American democracy today? Provide examples to support your answer.

log cabin campaign
the 1840 election, in which the Whigs painted William Henry Harrison as a man of the people

The Tyranny and Triumph of the Majority by OpenStaxCollege is licensed under a Creative Commons Attribution 4.0 International License, except where otherwise noted.