This famous 1819 painting by John Trumbull shows members of the committee entrusted with drafting the Declaration of Independence presenting their work to the Continental Congress in 1776. Note the British flags on the wall. Separating from the British Empire proved to be very difficult as the colonies and the Empire were linked with strong cultural, historical, and economic bonds forged over several generations. 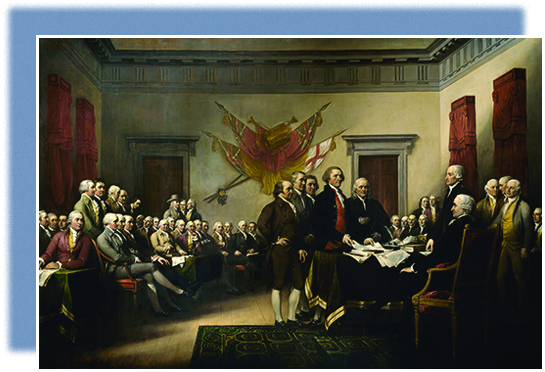 By the 1770s, Great Britain ruled a vast empire, with its American colonies producing useful raw materials and profitably consuming British goods. From Britain’s perspective, it was inconceivable that the colonies would wage a successful war for independence; in 1776, they appeared weak and disorganized, no match for the Empire. Yet, although the Revolutionary War did indeed drag on for eight years, in 1783, the thirteen colonies, now the United States, ultimately prevailed against the British.

The Revolution succeeded because colonists from diverse economic and social backgrounds united in their opposition to Great Britain. Although thousands of colonists remained loyal to the crown and many others preferred to remain neutral, a sense of community against a common enemy prevailed among Patriots. The signing of the Declaration of Independence ([link]) exemplifies the spirit of that common cause. Representatives asserted: “That these United Colonies are, and of Right ought to be Free and Independent States; that they are Absolved from all Allegiance to the British Crown, . . . And for the support of this Declaration, . . . we mutually pledge to each other our Lives, our Fortunes and our sacred Honor.”