Human factors psychology (or ergonomics, a term that is favored in Europe) is the third subject area within industrial and organizational psychology. This field is concerned with the integration of the human-machine interface in the workplace, through design, and specifically with researching and designing machines that fit human requirements. The integration may be physical or cognitive, or a combination of both. Anyone who needs to be convinced that the field is necessary need only try to operate an unfamiliar television remote control or use a new piece of software for the first time. Whereas the two other areas of I-O psychology focus on the interface between the worker and team, group, or organization, human factors psychology focuses on the individual worker’s interaction with a machine, work station, information displays, and the local environment, such as lighting. In the United States, human factors psychology has origins in both psychology and engineering; this is reflected in the early contributions of Lillian Gilbreth (psychologist and engineer) and her husband Frank Gilbreth (engineer).

Human factor professionals are involved in design from the beginning of a project, as is more common in software design projects, or toward the end in testing and evaluation, as is more common in traditional industries (Howell, 2003). Another important role of human factor professionals is in the development of regulations and principles of best design. These regulations and principles are often related to work safety. For example, the Three Mile Island nuclear accident lead to Nuclear Regulatory Commission (NRC) requirements for additional instrumentation in nuclear facilities to provide operators with more critical information and increased operator training (United States Nuclear Regulatory Commission, 2013). The American National Standards Institute (ANSI, 2000), an independent developer of industrial standards, develops many standards related to ergonomic design, such as the design of control-center workstations that are used for transportation control or industrial process control.

Many of the concerns of human factors psychology are related to workplace safety. These concerns can be studied to help prevent work-related injuries of individual workers or those around them. Safety protocols may also be related to activities, such as commercial driving or flying, medical procedures, and law enforcement, that have the potential to impact the public.

One of the methods used to reduce accidents in the workplace is a checklist. The airline industry is one industry that uses checklists. Pilots are required to go through a detailed checklist of the different parts of the aircraft before takeoff to ensure that all essential equipment is working correctly. Astronauts also go through checklists before takeoff. The surgical safety checklist shown in [link] was developed by the World Health Organization (WHO) and serves as the basis for many checklists at medical facilities.

Checklists, such as the WHO surgical checklist shown here, help reduce workplace accidents. 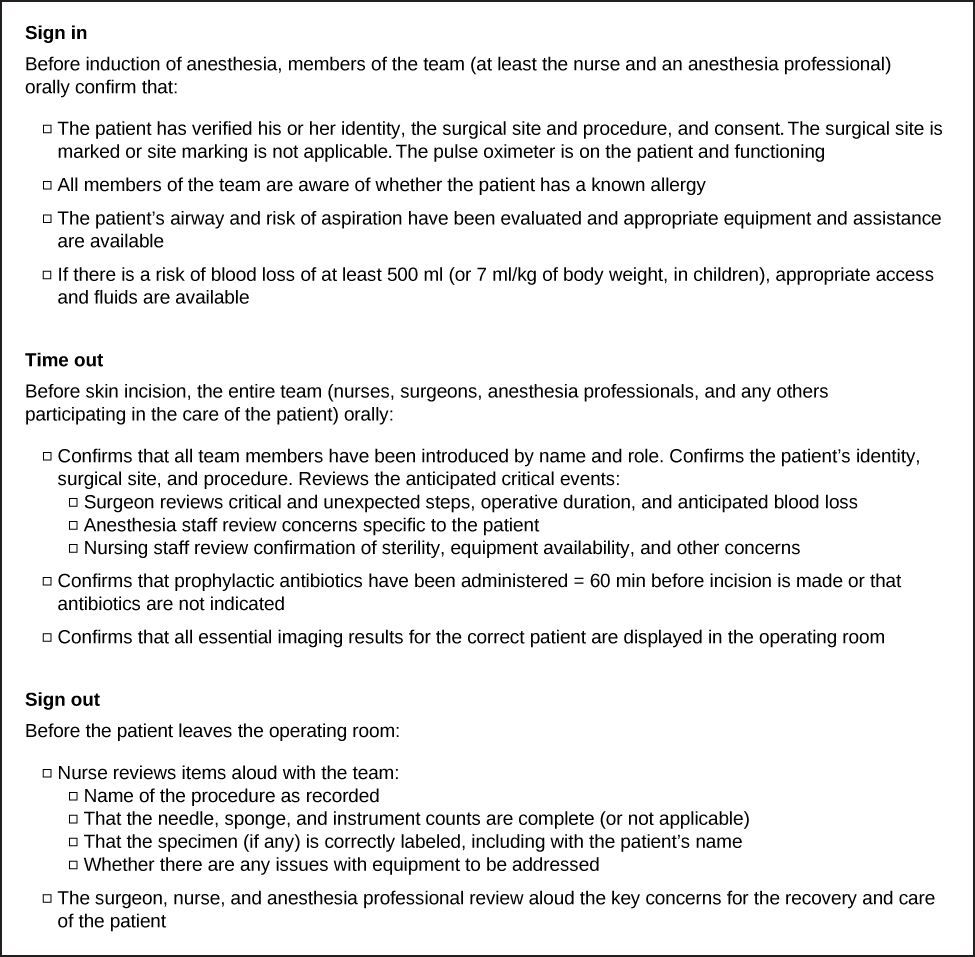 Safety concerns also lead to limits to how long an operator, such as a pilot or truck driver, is allowed to operate the equipment. Recently the Federal Aviation Administration (FAA) introduced limits for how long a pilot is allowed to fly without an overnight break.

Howell (2003) outlines some important areas of research and practice in the field of human factors. These are summarized in [link].

As an example of research in human factors psychology Bruno & Abrahão (2012) examined the impact of the volume of operator decisions on the accuracy of decisions made within an information security center at a banking institution in Brazil. The study examined a total of about 45,000 decisions made by 35 operators and 4 managers over a period of 60 days. Their study found that as the number of decisions made per day by the operators climbed, that is, as their cognitive effort increased, the operators made more mistakes in falsely identifying incidents as real security breaches (when, in reality, they were not). Interestingly, the opposite mistake of identifying real intrusions as false alarms did not increase with increased cognitive demand. This appears to be good news for the bank, since false alarms are not as costly as incorrectly rejecting a genuine threat. These kinds of studies combine research on attention, perception, teamwork, and human–computer interactions in a field of considerable societal and business significance. This is exactly the context of the events that led to the massive data breach for Target in the fall of 2013. Indications are that security personnel received signals of a security breach but did not interpret them correctly, thus allowing the breach to continue for two weeks until an outside agency, the FBI, informed the company (Riley, Elgin, Lawrence, & Matlack, 2014).

What aspect of an office workstation would a human factors psychologist be concerned about?

A human factors psychologist who studied how a worker interacted with a search engine would be researching in the area of ________.

What role could a flight simulator play in the design of a new aircraft?

Answers will vary, but they should include that the simulator would be used to determine how pilots interact with the controls and displays within the cockpit, including under conditions of simulated emergencies.

Describe an example of a technology or team and technology interaction that you have had in the context of school or work that could have benefited from better design. What were the effects of the poor design? Make one suggestion for its improvement.

Human Factors Psychology and Workplace Design by OpenStaxCollege is licensed under a Creative Commons Attribution 4.0 International License, except where otherwise noted.