In Greek mythology, Psyche was a mortal woman whose beauty was so great that it rivaled that of the goddess Aphrodite. Aphrodite became so jealous of Psyche that she sent her son, Eros, to make Psyche fall in love with the ugliest man in the world. However, Eros accidentally pricked himself with the tip of his arrow and fell madly in love with Psyche himself. He took Psyche to his palace and showered her with gifts, yet she could never see his face. While visiting Psyche, her sisters roused suspicion in Psyche about her mysterious lover, and eventually, Psyche betrayed Eros’ wishes to remain unseen to her ([link]). Because of this betrayal, Eros abandoned Psyche. When Psyche appealed to Aphrodite to reunite her with Eros, Aphrodite gave her a series of impossible tasks to complete. Psyche managed to complete all of these trials; ultimately, her perseverance paid off as she was reunited with Eros and was ultimately transformed into a goddess herself (Ashliman, 2001; Greek Myths & Greek Mythology, 2014). 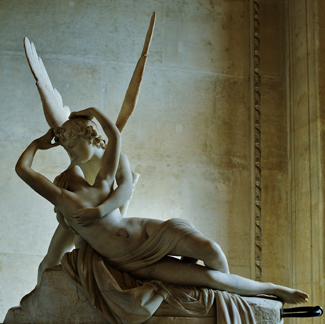 Psyche comes to represent the human soul’s triumph over the misfortunes of life in the pursuit of true happiness (Bulfinch, 1855); in fact, the Greek word psyche means soul, and it is often represented as a butterfly. The word psychology was coined at a time when the concepts of soul and mind were not as clearly distinguished (Green, 2001). The root ology denotes scientific study of, and psychology refers to the scientific study of the mind. Since science studies only observable phenomena and the mind is not directly observable, we expand this definition to the scientific study of mind and behavior.

The scientific study of any aspect of the world uses the scientific method to acquire knowledge. To apply the scientific method, a researcher with a question about how or why something happens will propose a tentative explanation, called a hypothesis, to explain the phenomenon. A hypothesis is not just any explanation; it should fit into the context of a scientific theory. A scientific theory is a broad explanation or group of explanations for some aspect of the natural world that is consistently supported by evidence over time. A theory is the best understanding that we have of that part of the natural world. Armed with the hypothesis, the researcher then makes observations or, better still, carries out an experiment to test the validity of the hypothesis. That test and its results are then published so that others can check the results or build on them. It is necessary that any explanation in science be testable, which means that the phenomenon must be perceivable and measurable. For example, that a bird sings because it is happy is not a testable hypothesis, since we have no way to measure the happiness of a bird. We must ask a different question, perhaps about the brain state of the bird, since this can be measured. In general, science deals only with matter and energy, that is, those things that can be measured, and it cannot arrive at knowledge about values and morality. This is one reason why our scientific understanding of the mind is so limited, since thoughts, at least as we experience them, are neither matter nor energy. The scientific method is also a form of empiricism. An empirical method for acquiring knowledge is one based on observation, including experimentation, rather than a method based only on forms of logical argument or previous authorities.

It was not until the late 1800s that psychology became accepted as its own academic discipline. Before this time, the workings of the mind were considered under the auspices of philosophy. Given that any behavior is, at its roots, biological, some areas of psychology take on aspects of a natural science like biology. No biological organism exists in isolation, and our behavior is influenced by our interactions with others. Therefore, psychology is also a social science.

MERITS OF AN EDUCATION IN PSYCHOLOGY

Often, students take their first psychology course because they are interested in helping others and want to learn more about themselves and why they act the way they do. Sometimes, students take a psychology course because it either satisfies a general education requirement or is required for a program of study such as nursing or pre-med. Many of these students develop such an interest in the area that they go on to declare psychology as their major. As a result, psychology is one of the most popular majors on college campuses across the United States (Johnson & Lubin, 2011). A number of well-known individuals were psychology majors. Just a few famous names on this list are Facebook’s creator Mark Zuckerberg, television personality and political satirist Jon Stewart, actress Natalie Portman, and filmmaker Wes Craven (Halonen, 2011). About 6 percent of all bachelor degrees granted in the United States are in the discipline of psychology (U.S. Department of Education, 2013).

An education in psychology is valuable for a number of reasons. Psychology students hone critical thinking skills and are trained in the use of the scientific method. Critical thinking is the active application of a set of skills to information for the understanding and evaluation of that information. The evaluation of information—assessing its reliability and usefulness— is an important skill in a world full of competing “facts,” many of which are designed to be misleading. For example, critical thinking involves maintaining an attitude of skepticism, recognizing internal biases, making use of logical thinking, asking appropriate questions, and making observations. Psychology students also can develop better communication skills during the course of their undergraduate coursework (American Psychological Association, 2011). Together, these factors increase students’ scientific literacy and prepare students to critically evaluate the various sources of information they encounter.

In addition to these broad-based skills, psychology students come to understand the complex factors that shape one’s behavior. They appreciate the interaction of our biology, our environment, and our experiences in determining who we are and how we will behave. They learn about basic principles that guide how we think and behave, and they come to recognize the tremendous diversity that exists across individuals and across cultural boundaries (American Psychological Association, 2011).

Watch a brief video that describes some of the questions a student should consider before deciding to major in psychology.

Which of the following was mentioned as a skill to which psychology students would be exposed?

Before psychology became a recognized academic discipline, matters of the mind were undertaken by those in ________.

Why do you think psychology courses like this one are often requirements of so many different programs of study?

Psychology courses deal with a number of issues that are helpful in a variety of settings. The text made mention of the types of skills as well as the knowledge base with which students of psychology become familiar. As mentioned in the link to learning, psychology is often helpful/valued in fields in which interacting with others is a major part of the job.

Why do you think many people might be skeptical about psychology being a science?

One goal of psychology is the study of the mind. Science cannot directly study the mind, because it is not a form of matter or energy. This might create some skepticism about the scientific nature of psychology.

empirical method
method for acquiring knowledge based on observation, including experimentation, rather than a method based only on forms of logical argument or previous authorities

psychology
scientific study of the mind and behavior

What Is Psychology? by OpenStaxCollege is licensed under a Creative Commons Attribution 4.0 International License, except where otherwise noted.