DEFINITION OF A PSYCHOLOGICAL DISORDER

Perhaps the simplest approach to conceptualizing psychological disorders is to label behaviors, thoughts, and inner experiences that are atypical, distressful, dysfunctional, and sometimes even dangerous, as signs of a disorder. For example, if you ask a classmate for a date and you are rejected, you probably would feel a little dejected. Such feelings would be normal. If you felt extremely depressed—so much so that you lost interest in activities, had difficulty eating or sleeping, felt utterly worthless, and contemplated suicide—your feelings would be atypical, would deviate from the norm, and could signify the presence of a psychological disorder. Just because something is atypical, however, does not necessarily mean it is disordered.

For example, only about 4% of people in the United States have red hair, so red hair is considered an atypical characteristic ([link]), but it is not considered disordered, it’s just unusual. And it is less unusual in Scotland, where approximately 13% of the population has red hair (“DNA Project Aims,” 2012). As you will learn, some disorders, although not exactly typical, are far from atypical, and the rates in which they appear in the population are surprisingly high.

If we can agree that merely being atypical is an insufficient criterion for a having a psychological disorder, is it reasonable to consider behavior or inner experiences that differ from widely expected cultural values or expectations as disordered? Using this criterion, a woman who walks around a subway platform wearing a heavy winter coat in July while screaming obscenities at strangers may be considered as exhibiting symptoms of a psychological disorder. Her actions and clothes violate socially accepted rules governing appropriate dress and behavior; these characteristics are atypical.

Violating cultural expectations is not, in and of itself, a satisfactory means of identifying the presence of a psychological disorder. Since behavior varies from one culture to another, what may be expected and considered appropriate in one culture may not be viewed as such in other cultures. For example, returning a stranger’s smile is expected in the United States because a pervasive social norm dictates that we reciprocate friendly gestures. A person who refuses to acknowledge such gestures might be considered socially awkward—perhaps even disordered—for violating this expectation. However, such expectations are not universally shared. Cultural expectations in Japan involve showing reserve, restraint, and a concern for maintaining privacy around strangers. Japanese people are generally unresponsive to smiles from strangers (Patterson et al., 2007). Eye contact provides another example. In the United States and Europe, eye contact with others typically signifies honesty and attention. However, most Latin-American, Asian, and African cultures interpret direct eye contact as rude, confrontational, and aggressive (Pazain, 2010). Thus, someone who makes eye contact with you could be considered appropriate and respectful or brazen and offensive, depending on your culture ([link]).

Eye contact is one of many social gestures that vary from culture to culture. (credit: Joi Ito) 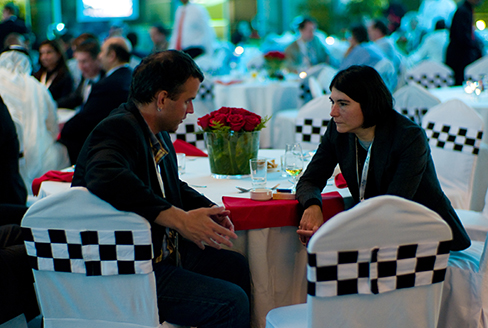 Hallucinations (seeing or hearing things that are not physically present) in Western societies is a violation of cultural expectations, and a person who reports such inner experiences is readily labeled as psychologically disordered. In other cultures, visions that, for example, pertain to future events may be regarded as normal experiences that are positively valued (Bourguignon, 1970). Finally, it is important to recognize that cultural norms change over time: what might be considered typical in a society at one time may no longer be viewed this way later, similar to how fashion trends from one era may elicit quizzical looks decades later—imagine how a headband, legwarmers, and the big hair of the 1980s would go over on your campus today.

The Myth of Mental Illness

In the 1950s and 1960s, the concept of mental illness was widely criticized. One of the major criticisms focused on the notion that mental illness was a “myth that justifies psychiatric intervention in socially disapproved behavior” (Wakefield, 1992). Thomas Szasz (1960), a noted psychiatrist, was perhaps the biggest proponent of this view. Szasz argued that the notion of mental illness was invented by society (and the mental health establishment) to stigmatize and subjugate people whose behavior violates accepted social and legal norms. Indeed, Szasz suggested that what appear to be symptoms of mental illness are more appropriately characterized as “problems in living” (Szasz, 1960).

In his 1961 book, The Myth of Mental Illness: Foundations of a Theory of Personal Conduct, Szasz expressed his disdain for the concept of mental illness and for the field of psychiatry in general (Oliver, 2006). The basis for Szasz’s attack was his contention that detectable abnormalities in bodily structures and functions (e.g., infections and organ damage or dysfunction) represent the defining features of genuine illness or disease, and because symptoms of purported mental illness are not accompanied by such detectable abnormalities, so-called psychological disorders are not disorders at all. Szasz (1961/2010) proclaimed that “disease or illness can only affect the body; hence, there can be no mental illness” (p. 267).

Today, we recognize the extreme level of psychological suffering experienced by people with psychological disorders: the painful thoughts and feelings they experience, the disordered behavior they demonstrate, and the levels of distress and impairment they exhibit. This makes it very difficult to deny the reality of mental illness.

However controversial Szasz’s views and those of his supporters might have been, they have influenced the mental health community and society in several ways. First, lay people, politicians, and professionals now often refer to mental illness as mental health “problems,” implicitly acknowledging the “problems in living” perspective Szasz described (Buchanan-Barker & Barker, 2009). Also influential was Szasz’s view of homosexuality. Szasz was perhaps the first psychiatrist to openly challenge the idea that homosexuality represented a form of mental illness or disease (Szasz, 1965). By challenging the idea that homosexuality represented a form a mental illness, Szasz helped pave the way for the social and civil rights that gay and lesbian people now have (Barker, 2010). His work also inspired legal changes that protect the rights of people in psychiatric institutions and allow such individuals a greater degree of influence and responsibility over their lives (Buchanan-Barker & Barker, 2009).

If none of the criteria discussed so far is adequate by itself to define the presence of a psychological disorder, how can a disorder be conceptualized? Many efforts have been made to identify the specific dimensions of psychological disorders, yet none is entirely satisfactory. No universal definition of psychological disorder exists that can apply to all situations in which a disorder is thought to be present (Zachar & Kendler, 2007). However, one of the more influential conceptualizations was proposed by Wakefield (1992), who defined psychological disorder as a harmful dysfunction. Wakefield argued that natural internal mechanisms—that is, psychological processes honed by evolution, such as cognition, perception, and learning—have important functions, such as enabling us to experience the world the way others do and to engage in rational thought, problem solving, and communication. For example, learning allows us to associate a fear with a potential danger in such a way that the intensity of fear is roughly equal to the degree of actual danger. Dysfunction occurs when an internal mechanism breaks down and can no longer perform its normal function. But, the presence of a dysfunction by itself does not determine a disorder. The dysfunction must be harmful in that it leads to negative consequences for the individual or for others, as judged by the standards of the individual’s culture. The harm may include significant internal anguish (e.g., high levels of anxiety or depression) or problems in day-to-day living (e.g., in one’s social or work life).

To illustrate, Janet has an extreme fear of spiders. Janet’s fear might be considered a dysfunction in that it signals that the internal mechanism of learning is not working correctly (i.e., a faulty process prevents Janet from appropriately associating the magnitude of her fear with the actual threat posed by spiders). Janet’s fear of spiders has a significant negative influence on her life: she avoids all situations in which she suspects spiders to be present (e.g., the basement or a friend’s home), and she quit her job last month because she saw a spider in the restroom at work and is now unemployed. According to the harmful dysfunction model, Janet’s condition would signify a disorder because (a) there is a dysfunction in an internal mechanism, and (b) the dysfunction has resulted in harmful consequences. Similar to how the symptoms of physical illness reflect dysfunctions in biological processes, the symptoms of psychological disorders presumably reflect dysfunctions in mental processes. The internal mechanism component of this model is especially appealing because it implies that disorders may occur through a breakdown of biological functions that govern various psychological processes, thus supporting contemporary neurobiological models of psychological disorders (Fabrega, 2007).

Some believe that there is no essential criterion or set of criteria that can definitively distinguish all cases of disorder from nondisorder (Lilienfeld & Marino, 1999). In truth, no single approach to defining a psychological disorder is adequate by itself, nor is there universal agreement on where the boundary is between disordered and not disordered. From time to time we all experience anxiety, unwanted thoughts, and moments of sadness; our behavior at other times may not make much sense to ourselves or to others. These inner experiences and behaviors can vary in their intensity, but are only considered disordered when they are highly disturbing to us and/or others, suggest a dysfunction in normal mental functioning, and are associated with significant distress or disability in social or occupational activities.

In the harmful dysfunction definition of psychological disorders, dysfunction involves ________.

Patterns of inner experience and behavior are thought to reflect the presence of a psychological disorder if they ________.

Discuss why thoughts, feelings, or behaviors that are merely atypical or unusual would not necessarily signify the presence of a psychological disorder. Provide an example.

Just because something is atypical or unusual does not mean it is disordered. A person may experience atypical inner experiences or exhibit unusual behaviors, but she would not be considered disordered if they are not distressing, disturbing, or reflecting a dysfunction. For example, a classmate might stay up all night studying before exams; although atypical, this behavior is unlikely to possess any of the other criteria for psychological disorder mentioned previously.

Identify a behavior that is considered unusual or abnormal in your own culture; however, it would be considered normal and expected in another culture.

atypical
describes behaviors or feelings that deviate from the norm

etiology
cause or causes of a psychological disorder

What Are Psychological Disorders? by OpenStaxCollege is licensed under a Creative Commons Attribution 4.0 International License, except where otherwise noted.