Trait theorists believe personality can be understood via the approach that all people have certain traits, or characteristic ways of behaving. Do you tend to be sociable or shy? Passive or aggressive? Optimistic or pessimistic? Moody or even-tempered? Early trait theorists tried to describe all human personality traits. For example, one trait theorist, Gordon Allport (Allport & Odbert, 1936), found 4,500 words in the English language that could describe people. He organized these personality traits into three categories: cardinal traits, central traits, and secondary traits. A cardinal trait is one that dominates your entire personality, and hence your life—such as Ebenezer Scrooge’s greed and Mother Theresa’s altruism. Cardinal traits are not very common: Few people have personalities dominated by a single trait. Instead, our personalities typically are composed of multiple traits. Central traits are those that make up our personalities (such as loyal, kind, agreeable, friendly, sneaky, wild, and grouchy). Secondary traits are those that are not quite as obvious or as consistent as central traits. They are present under specific circumstances and include preferences and attitudes. For example, one person gets angry when people try to tickle him; another can only sleep on the left side of the bed; and yet another always orders her salad dressing on the side. And you—although not normally an anxious person—feel nervous before making a speech in front of your English class.

In an effort to make the list of traits more manageable, Raymond Cattell (1946, 1957) narrowed down the list to about 171 traits. However, saying that a trait is either present or absent does not accurately reflect a person’s uniqueness, because all of our personalities are actually made up of the same traits; we differ only in the degree to which each trait is expressed. Cattell (1957) identified 16 factors or dimensions of personality: warmth, reasoning, emotional stability, dominance, liveliness, rule-consciousness, social boldness, sensitivity, vigilance, abstractedness, privateness, apprehension, openness to change, self-reliance, perfectionism, and tension ([link]). He developed a personality assessment based on these 16 factors, called the 16PF. Instead of a trait being present or absent, each dimension is scored over a continuum, from high to low. For example, your level of warmth describes how warm, caring, and nice to others you are. If you score low on this index, you tend to be more distant and cold. A high score on this index signifies you are supportive and comforting.

Follow this link to an assessment based on Cattell’s 16PF questionnaire to see which personality traits dominate your personality.

Psychologists Hans and Sybil Eysenck were personality theorists ([link]) who focused on temperament, the inborn, genetically based personality differences that you studied earlier in the chapter. They believed personality is largely governed by biology. The Eysencks (Eysenck, 1990, 1992; Eysenck & Eysenck, 1963) viewed people as having two specific personality dimensions: extroversion/introversion and neuroticism/stability.

Hans and Sybil Eysenck believed that our personality traits are influenced by our genetic inheritance. (credit: “Sirswindon”/Wikimedia Commons) 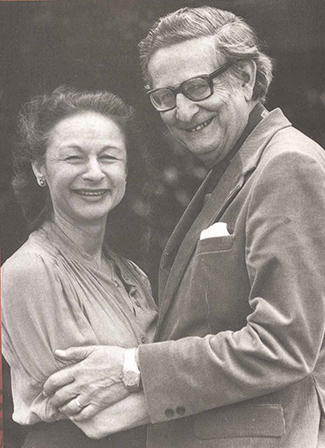 According to their theory, people high on the trait of extroversion are sociable and outgoing, and readily connect with others, whereas people high on the trait of introversion have a higher need to be alone, engage in solitary behaviors, and limit their interactions with others. In the neuroticism/stability dimension, people high on neuroticism tend to be anxious; they tend to have an overactive sympathetic nervous system and, even with low stress, their bodies and emotional state tend to go into a flight-or-fight reaction. In contrast, people high on stability tend to need more stimulation to activate their flight-or-fight reaction and are considered more emotionally stable. Based on these two dimensions, the Eysencks’ theory divides people into four quadrants. These quadrants are sometimes compared with the four temperaments described by the Greeks: melancholic, choleric, phlegmatic, and sanguine ([link]).

The Eysencks described two factors to account for variations in our personalities: extroversion/introversion and emotional stability/instability. 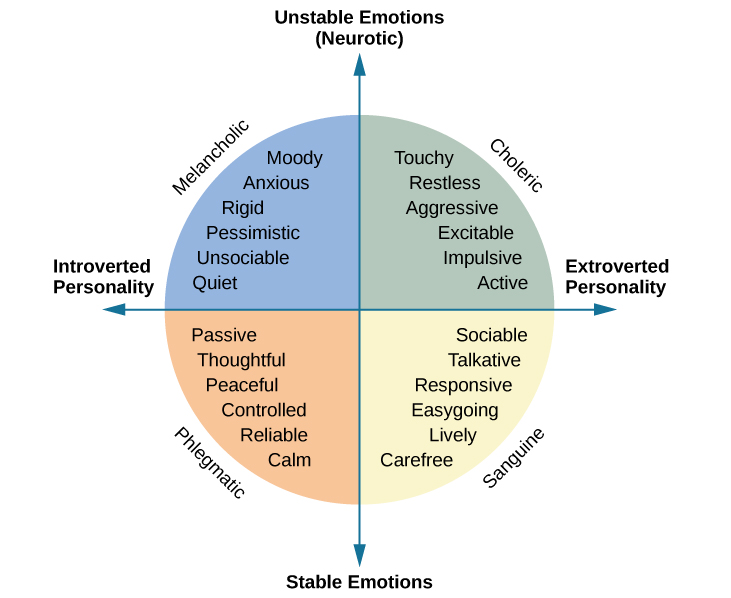 Later, the Eysencks added a third dimension: psychoticism versus superego control (Eysenck, Eysenck & Barrett, 1985). In this dimension, people who are high on psychoticism tend to be independent thinkers, cold, nonconformists, impulsive, antisocial, and hostile, whereas people who are high on superego control tend to have high impulse control—they are more altruistic, empathetic, cooperative, and conventional (Eysenck, Eysenck & Barrett, 1985).

While Cattell’s 16 factors may be too broad, the Eysenck’s two-factor system has been criticized for being too narrow. Another personality theory, called the Five Factor Model, effectively hits a middle ground, with its five factors referred to as the Big Five personality traits. It is the most popular theory in personality psychology today and the most accurate approximation of the basic trait dimensions (Funder, 2001). The five traits are openness to experience, conscientiousness, extroversion, agreeableness, and neuroticism ([link]). A helpful way to remember the traits is by using the mnemonic OCEAN.

In the Five Factor Model, each person has each trait, but they occur along a spectrum. Openness to experience is characterized by imagination, feelings, actions, and ideas. People who score high on this trait tend to be curious and have a wide range of interests. Conscientiousness is characterized by competence, self-discipline, thoughtfulness, and achievement-striving (goal-directed behavior). People who score high on this trait are hardworking and dependable. Numerous studies have found a positive correlation between conscientiousness and academic success (Akomolafe, 2013; Chamorro-Premuzic & Furnham, 2008; Conrad & Patry, 2012; Noftle & Robins, 2007; Wagerman & Funder, 2007). Extroversion is characterized by sociability, assertiveness, excitement-seeking, and emotional expression. People who score high on this trait are usually described as outgoing and warm. Not surprisingly, people who score high on both extroversion and openness are more likely to participate in adventure and risky sports due to their curious and excitement-seeking nature (Tok, 2011). The fourth trait is agreeableness, which is the tendency to be pleasant, cooperative, trustworthy, and good-natured. People who score low on agreeableness tend to be described as rude and uncooperative, yet one recent study reported that men who scored low on this trait actually earned more money than men who were considered more agreeable (Judge, Livingston, & Hurst, 2012). The last of the Big Five traits is neuroticism, which is the tendency to experience negative emotions. People high on neuroticism tend to experience emotional instability and are characterized as angry, impulsive, and hostile. Watson and Clark (1984) found that people reporting high levels of neuroticism also tend to report feeling anxious and unhappy. In contrast, people who score low in neuroticism tend to be calm and even-tempered.

In the Five Factor Model, each person has five traits, each scored on a continuum from high to low. In the center column, notice that the first letter of each trait spells the mnemonic OCEAN. 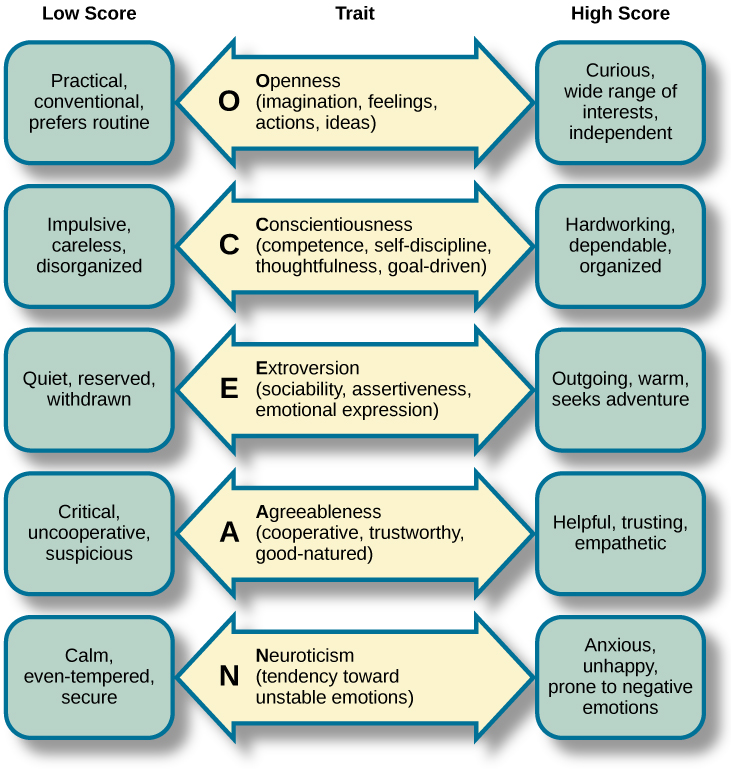 The Big Five personality factors each represent a range between two extremes. In reality, most of us tend to lie somewhere midway along the continuum of each factor, rather than at polar ends. It’s important to note that the Big Five traits are relatively stable over our lifespan, with some tendency for the traits to increase or decrease slightly. Researchers have found that conscientiousness increases through young adulthood into middle age, as we become better able to manage our personal relationships and careers (Donnellan & Lucas, 2008). Agreeableness also increases with age, peaking between 50 to 70 years (Terracciano, McCrae, Brant, & Costa, 2005). Neuroticism and extroversion tend to decline slightly with age (Donnellan & Lucas; Terracciano et al.). Additionally, The Big Five traits have been shown to exist across ethnicities, cultures, and ages, and may have substantial biological and genetic components (Jang, Livesley, & Vernon, 1996; Jang et al., 2006; McCrae & Costa, 1997; Schmitt et al., 2007).

Trait theorists attempt to explain our personality by identifying our stable characteristics and ways of behaving. They have identified important dimensions of personality. The Five Factor Model is the most widely accepted trait theory today. The five factors are openness, conscientiousness, extroversion, agreeableness, and neuroticism. These traits occur along a continuum.

According to the Eysencks’ theory, people who score high on neuroticism tend to be ________.

How stable are the Big Five traits over one’s lifespan?

The Big Five traits are relatively stable over our lifespan with a tendency for the traits to increase or decrease slightly. Researchers have found that conscientiousness increases through young adulthood into middle age, as we become better able to manage our personal relationships and careers. Agreeableness also increases with age, peaking between 50 to 70 years. However, neuroticism and extroversion tend to decline slightly with age.

A person with a high score on agreeableness is typically pleasant, cooperative, trustworthy and good-natured. People who score low on agreeableness tend to be described as rude and uncooperative. They may be difficult with which to work.

Review the Big Five personality traits shown in [link]. On which areas would you expect you’d score high? In which areas does the low score more accurately describe you?

Five Factor Model
theory that personality is composed of five factors or traits, including openness, conscientiousness, extroversion, agreeableness, and neuroticism

Trait Theorists by OpenStaxCollege is licensed under a Creative Commons Attribution 4.0 International License, except where otherwise noted.