Animal Nutrition and the Digestive System

Obtaining nutrition and energy from food is a multi-step process. For true animals, the first step is ingestion, the act of taking in food. This is followed by digestion, absorption, and elimination. In the following sections, each of these steps will be discussed in detail.

The large molecules found in intact food cannot pass through the cell membranes. Food needs to be broken into smaller particles so that animals can harness the nutrients and organic molecules. The first step in this process is ingestion. Ingestion is the process of taking in food through the mouth. In vertebrates, the teeth, saliva, and tongue play important roles in mastication (preparing the food into bolus). While the food is being mechanically broken down, the enzymes in saliva begin to chemically process the food as well. The combined action of these processes modifies the food from large particles to a soft mass that can be swallowed and can travel the length of the esophagus.

Digestion is the mechanical and chemical break down of food into small organic fragments. It is important to break down macromolecules into smaller fragments that are of suitable size for absorption across the digestive epithelium. Large, complex molecules of proteins, polysaccharides, and lipids must be reduced to simpler particles such as simple sugar before they can be absorbed by the digestive epithelial cells. Different organs play specific roles in the digestive process. The animal diet needs carbohydrates, protein, and fat, as well as vitamins and inorganic components for nutritional balance. How each of these components is digested is discussed in the following sections.

The digestion of carbohydrates begins in the mouth. The salivary enzyme amylase begins the breakdown of food starches into maltose, a disaccharide. As the bolus of food travels through the esophagus to the stomach, no significant digestion of carbohydrates takes place. The esophagus produces no digestive enzymes but does produce mucous for lubrication. The acidic environment in the stomach stops the action of the amylase enzyme.

The next step of carbohydrate digestion takes place in the duodenum. Recall that the chyme from the stomach enters the duodenum and mixes with the digestive secretion from the pancreas, liver, and gallbladder. Pancreatic juices also contain amylase, which continues the breakdown of starch and glycogen into maltose, a disaccharide. The disaccharides are broken down into monosaccharides by enzymes called maltases, sucrases, and lactases, which are also present in the brush border of the small intestinal wall. Maltase breaks down maltose into glucose. Other disaccharides, such as sucrose and lactose are broken down by sucrase and lactase, respectively. Sucrase breaks down sucrose (or “table sugar”) into glucose and fructose, and lactase breaks down lactose (or “milk sugar”) into glucose and galactose. The monosaccharides (glucose) thus produced are absorbed and then can be used in metabolic pathways to harness energy. The monosaccharides are transported across the intestinal epithelium into the bloodstream to be transported to the different cells in the body. The steps in carbohydrate digestion are summarized in [link] and [link].

Digestion of carbohydrates is performed by several enzymes. Starch and glycogen are broken down into glucose by amylase and maltase. Sucrose (table sugar) and lactose (milk sugar) are broken down by sucrase and lactase, respectively.

A large part of protein digestion takes place in the stomach. The enzyme pepsin plays an important role in the digestion of proteins by breaking down the intact protein to peptides, which are short chains of four to nine amino acids. In the duodenum, other enzymes—trypsin, elastase, and chymotrypsin—act on the peptides reducing them to smaller peptides. Trypsin elastase, carboxypeptidase, and chymotrypsin are produced by the pancreas and released into the duodenum where they act on the chyme. Further breakdown of peptides to single amino acids is aided by enzymes called peptidases (those that break down peptides). Specifically, carboxypeptidase, dipeptidase, and aminopeptidase play important roles in reducing the peptides to free amino acids. The amino acids are absorbed into the bloodstream through the small intestines. The steps in protein digestion are summarized in [link] and [link].

Protein digestion is a multistep process that begins in the stomach and continues through the intestines. 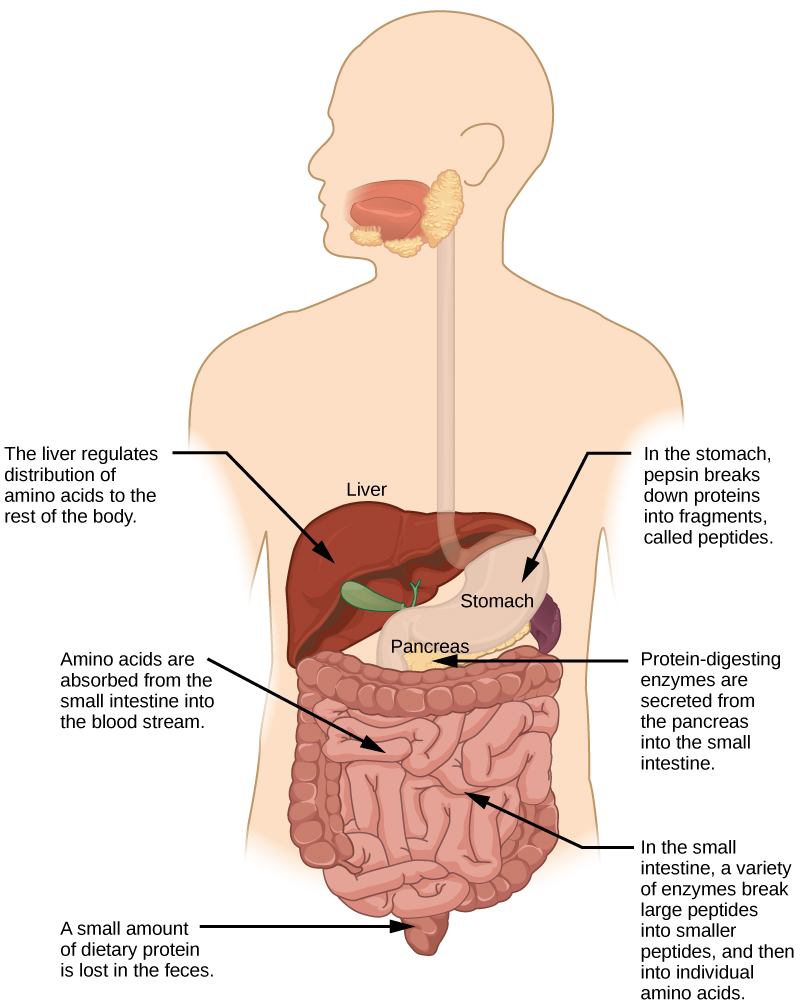 Lipid digestion begins in the stomach with the aid of lingual lipase and gastric lipase. However, the bulk of lipid digestion occurs in the small intestine due to pancreatic lipase. When chyme enters the duodenum, the hormonal responses trigger the release of bile, which is produced in the liver and stored in the gallbladder. Bile aids in the digestion of lipids, primarily triglycerides by emulsification. Emulsification is a process in which large lipid globules are broken down into several small lipid globules. These small globules are more widely distributed in the chyme rather than forming large aggregates. Lipids are hydrophobic substances: in the presence of water, they will aggregate to form globules to minimize exposure to water. Bile contains bile salts, which are amphipathic, meaning they contain hydrophobic and hydrophilic parts. Thus, the bile salts hydrophilic side can interface with water on one side and the hydrophobic side interfaces with lipids on the other. By doing so, bile salts emulsify large lipid globules into small lipid globules.

Why is emulsification important for digestion of lipids? Pancreatic juices contain enzymes called lipases (enzymes that break down lipids). If the lipid in the chyme aggregates into large globules, very little surface area of the lipids is available for the lipases to act on, leaving lipid digestion incomplete. By forming an emulsion, bile salts increase the available surface area of the lipids many fold. The pancreatic lipases can then act on the lipids more efficiently and digest them, as detailed in [link]. Lipases break down the lipids into fatty acids and glycerides. These molecules can pass through the plasma membrane of the cell and enter the epithelial cells of the intestinal lining. The bile salts surround long-chain fatty acids and monoglycerides forming tiny spheres called micelles. The micelles move into the brush border of the small intestine absorptive cells where the long-chain fatty acids and monoglycerides diffuse out of the micelles into the absorptive cells leaving the micelles behind in the chyme. The long-chain fatty acids and monoglycerides recombine in the absorptive cells to form triglycerides, which aggregate into globules and become coated with proteins. These large spheres are called chylomicrons. Chylomicrons contain triglycerides, cholesterol, and other lipids and have proteins on their surface. The surface is also composed of the hydrophilic phosphate “heads” of phospholipids. Together, they enable the chylomicron to move in an aqueous environment without exposing the lipids to water. Chylomicrons leave the absorptive cells via exocytosis. Chylomicrons enter the lymphatic vessels, and then enter the blood in the subclavian vein.

Lipids are digested and absorbed in the small intestine. 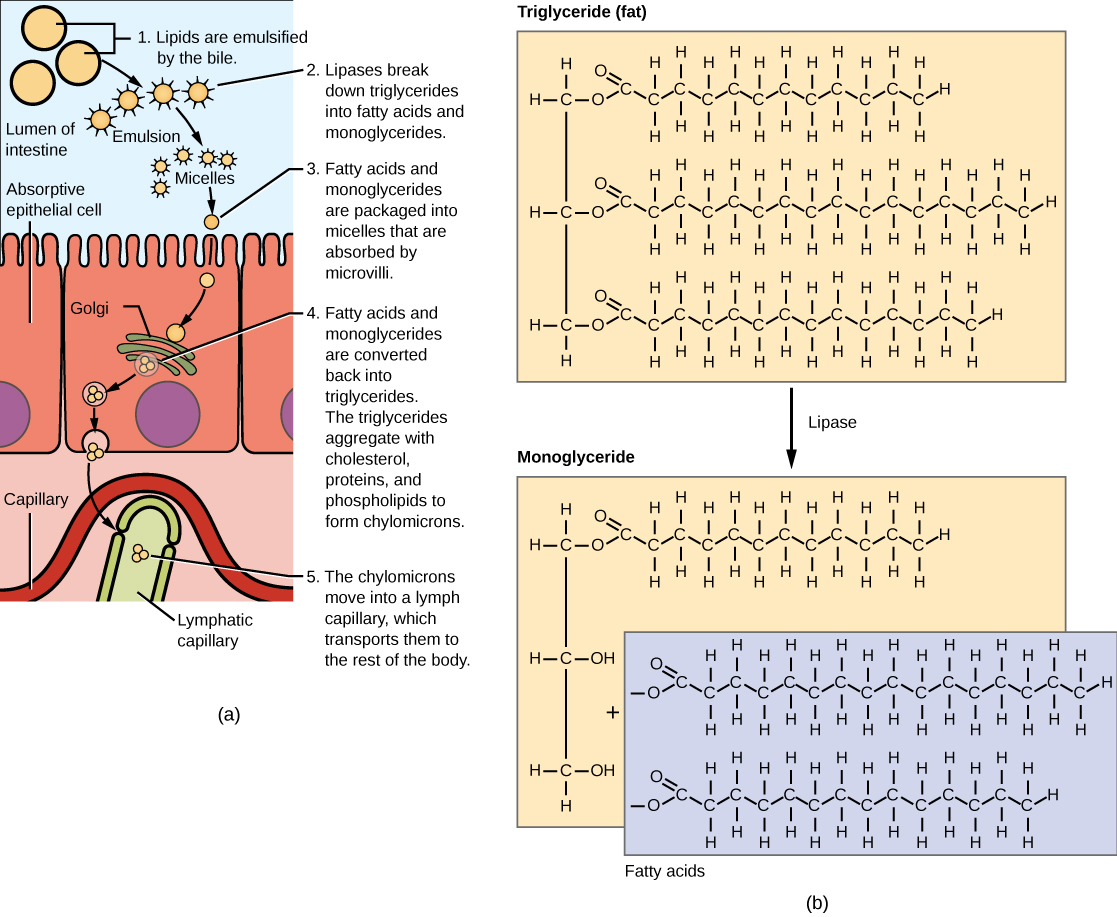 This website has an overview of the digestion of protein, fat, and carbohydrates.

Art Connection
Mechanical and chemical digestion of food takes place in many steps, beginning in the mouth and ending in the rectum. 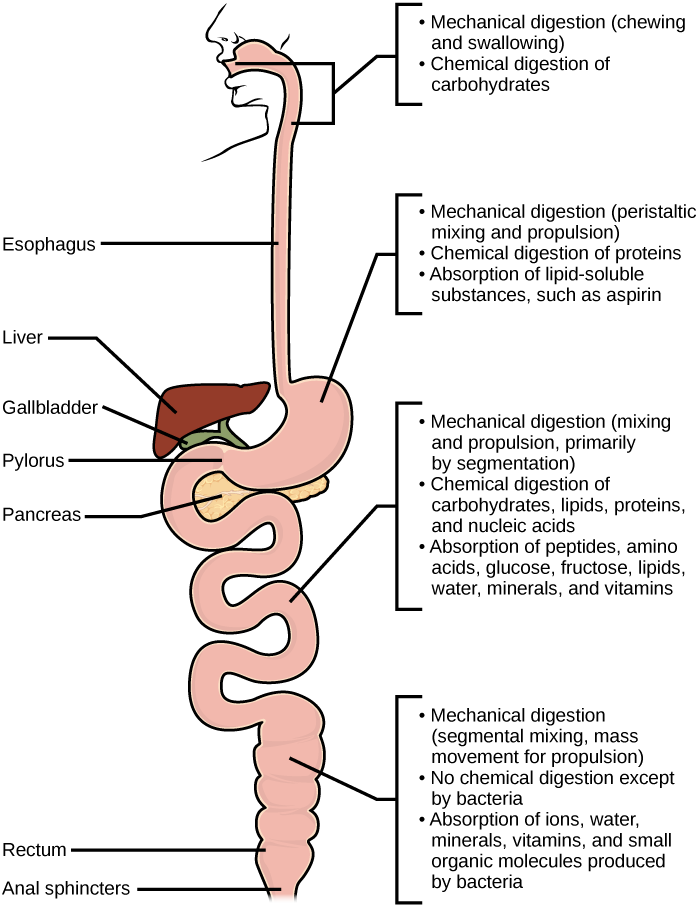 Which of the following statements about digestive processes is true?

The final step in digestion is the elimination of undigested food content and waste products. The undigested food material enters the colon, where most of the water is reabsorbed. Recall that the colon is also home to the microflora called “intestinal flora” that aid in the digestion process. The semi-solid waste is moved through the colon by peristaltic movements of the muscle and is stored in the rectum. As the rectum expands in response to storage of fecal matter, it triggers the neural signals required to set up the urge to eliminate. The solid waste is eliminated through the anus using peristaltic movements of the rectum.

Diarrhea and constipation are some of the most common health concerns that affect digestion. Constipation is a condition where the feces are hardened because of excess water removal in the colon. In contrast, if enough water is not removed from the feces, it results in diarrhea. Many bacteria, including the ones that cause cholera, affect the proteins involved in water reabsorption in the colon and result in excessive diarrhea.

Emesis, or vomiting, is elimination of food by forceful expulsion through the mouth. It is often in response to an irritant that affects the digestive tract, including but not limited to viruses, bacteria, emotions, sights, and food poisoning. This forceful expulsion of the food is due to the strong contractions produced by the stomach muscles. The process of emesis is regulated by the medulla.

Digestion begins with ingestion, where the food is taken in the mouth. Digestion and absorption take place in a series of steps with special enzymes playing important roles in digesting carbohydrates, proteins, and lipids. Elimination describes removal of undigested food contents and waste products from the body. While most absorption occurs in the small intestines, the large intestine is responsible for the final removal of water that remains after the absorptive process of the small intestines. The cells that line the large intestine absorb some vitamins as well as any leftover salts and water. The large intestine (colon) is also where feces is formed.

[link] Which of the following statements about digestive processes is true?

Where does the majority of protein digestion take place?

Explain why some dietary lipid is a necessary part of a balanced diet.

Lipids add flavor to food and promote a sense of satiety or fullness. Fatty foods are sources of high energy; one gram of lipid contains nine calories. Lipids are also required in the diet to aid the absorption of lipid-soluble vitamins and for the production of lipid-soluble hormones.

aminopeptidase
protease that breaks down peptides to single amino acids; secreted by the brush border of small intestine

carboxypeptidase
protease that breaks down peptides to single amino acids; secreted by the brush border of the small intestine

dipeptidase
protease that breaks down peptides to single amino acids; secreted by the brush border of small intestine

ingestion
act of taking in food

lactase
enzyme that breaks down lactose into glucose and galactose

maltase
enzyme that breaks down maltose into glucose

sucrase
enzyme that breaks down sucrose into glucose and fructose

Digestive System Processes by OpenStaxCollege is licensed under a Creative Commons Attribution 4.0 International License, except where otherwise noted.