Mammals are vertebrates that possess hair and mammary glands. Several other characteristics are distinctive to mammals, including certain features of the jaw, skeleton, integument, and internal anatomy. Modern mammals belong to three clades: monotremes, marsupials, and eutherians (or placental mammals).

The presence of hair is one of the most obvious signs of a mammal. Although it is not very extensive on certain species, such as whales, hair has many important functions for mammals. Mammals are endothermic, and hair provides insulation to retain heat generated by metabolic work. Hair traps a layer of air close to the body, retaining heat. Along with insulation, hair can serve as a sensory mechanism via specialized hairs called vibrissae, better known as whiskers. These attach to nerves that transmit information about sensation, which is particularly useful to nocturnal or burrowing mammals. Hair can also provide protective coloration or be part of social signaling, such as when an animal’s hair stands “on end.”

Mammalian integument, or skin, includes secretory glands with various functions. Sebaceous glands produce a lipid mixture called sebum that is secreted onto the hair and skin for water resistance and lubrication. Sebaceous glands are located over most of the body. Eccrine glands produce sweat, or perspiration, which is mainly composed of water. In most mammals, eccrine glands are limited to certain areas of the body, and some mammals do not possess them at all. However, in primates, especially humans, sweat figures prominently in thermoregulation, regulating the body through evaporative cooling. Sweat glands are located over most of the body surface in primates. Apocrine glands, or scent glands, secrete substances that are used for chemical communication, such as in skunks. Mammary glands produce milk that is used to feed newborns. While male monotremes and eutherians possess mammary glands, male marsupials do not. Mammary glands likely are modified sebaceous or eccrine glands, but their evolutionary origin is not entirely clear.

The skeletal system of mammals possesses many unique features. The lower jaw of mammals consists of only one bone, the dentary. The jaws of other vertebrates are composed of more than one bone. In mammals, the dentary bone joins the skull at the squamosal bone, while in other vertebrates, the quadrate bone of the jaw joins with the articular bone of the skull. These bones are present in mammals, but they have been modified to function in hearing and form bones in the middle ear ([link]). Other vertebrates possess only one middle ear bone, the stapes. Mammals have three: the malleus, incus, and stapes. The malleus originated from the articular bone, whereas the incus originated from the quadrate bone. This arrangement of jaw and ear bones aids in distinguishing fossil mammals from fossils of other synapsids.

Bones of the mammalian inner ear are modified from bones of the jaw and skull. (credit: NCI) 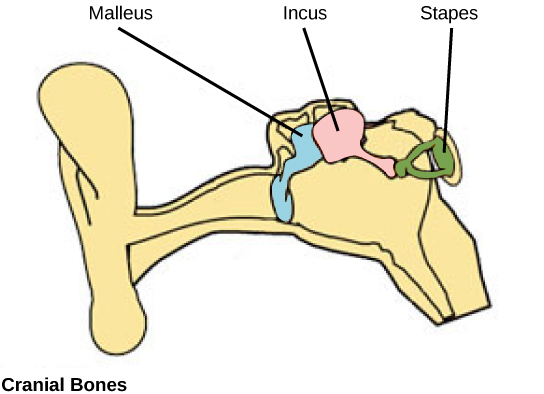 The adductor muscle that closes the jaw is composed of two muscles in mammals: the temporalis and the masseter. These allow side-to-side movement of the jaw, making chewing possible, which is unique to mammals. Most mammals have heterodont teeth, meaning that they have different types and shapes of teeth rather than just one type and shape of tooth. Most mammals are diphyodonts, meaning that they have two sets of teeth in their lifetime: deciduous or “baby” teeth, and permanent teeth. Other vertebrates are polyphyodonts, that is, their teeth are replaced throughout their entire life.

Mammals, like birds, possess a four-chambered heart. Mammals also have a specialized group of cardiac fibers located in the walls of their right atrium called the sinoatrial node, or pacemaker, which determines the rate at which the heart beats. Mammalian erythrocytes (red blood cells) do not have nuclei, whereas the erythrocytes of other vertebrates are nucleated.

The kidneys of mammals have a portion of the nephron called the loop of Henle or nephritic loop, which allows mammals to produce urine with a high concentration of solutes, higher than that of the blood. Mammals lack a renal portal system, which is a system of veins that moves blood from the hind or lower limbs and region of the tail to the kidneys. Renal portal systems are present in all other vertebrates except jawless fishes. A urinary bladder is present in all mammals.

Mammalian brains have certain characteristics that differ from other vertebrates. In some, but not all mammals, the cerebral cortex, the outermost part of the cerebrum, is highly folded, allowing for a greater surface area than is possible with a smooth cortex. The optic lobes, located in the midbrain, are divided into two parts in mammals, whereas other vertebrates possess a single, undivided lobe. Eutherian mammals also possess a specialized structure that links the two cerebral hemispheres, called the corpus callosum.

Mammals are synapsids, meaning they have a single opening in the skull. They are the only living synapsids, as earlier forms became extinct by the Jurassic period. The early non-mammalian synapsids can be divided into two groups, the pelycosaurs and the therapsids. Within the therapsids, a group called the cynodonts are thought to be the ancestors of mammals ([link]).

Cynodonts, which first appeared in the Late Permian period 260 million years ago, are thought to be the ancestors of modern mammals. (credit: Nobu Tamura) 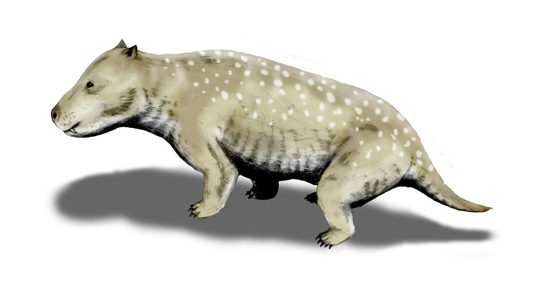 A key characteristic of synapsids is endothermy, rather than the ectothermy seen in most other vertebrates. The increased metabolic rate required to internally modify body temperature went hand in hand with changes to certain skeletal structures. The later synapsids, which had more evolved characteristics unique to mammals, possess cheeks for holding food and heterodont teeth, which are specialized for chewing, mechanically breaking down food to speed digestion and releasing the energy needed to produce heat. Chewing also requires the ability to chew and breathe at the same time, which is facilitated by the presence of a secondary palate. A secondary palate separates the area of the mouth where chewing occurs from the area above where respiration occurs, allowing breathing to proceed uninterrupted during chewing. A secondary palate is not found in pelycosaurs but is present in cynodonts and mammals. The jawbone also shows changes from early synapsids to later ones. The zygomatic arch, or cheekbone, is present in mammals and advanced therapsids such as cynodonts, but is not present in pelycosaurs. The presence of the zygomatic arch suggests the presence of the masseter muscle, which closes the jaw and functions in chewing.

In the appendicular skeleton, the shoulder girdle of therian mammals is modified from that of other vertebrates in that it does not possess a procoracoid bone or an interclavicle, and the scapula is the dominant bone.

Mammals evolved from therapsids in the late Triassic period, as the earliest known mammal fossils are from the early Jurassic period, some 205 million years ago. Early mammals were small, about the size of a small rodent. Mammals first began to diversify in the Mesozoic Era, from the Jurassic to the Cretaceous periods, although most of these mammals were extinct by the end of the Mesozoic. During the Cretaceous period, another radiation of mammals began and continued through the Cenozoic Era, about 65 million years ago.

The eutherians, or placental mammals, and the marsupials together comprise the clade of therian mammals. Monotremes, or metatherians, form their sister clade.

(a) The platypus, a monotreme, possesses a leathery beak and lays eggs rather than giving birth to live young. (b) The echidna is another monotreme. (credit b: modification of work by Barry Thomas) 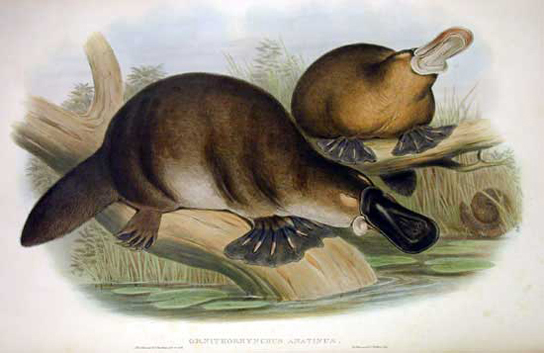 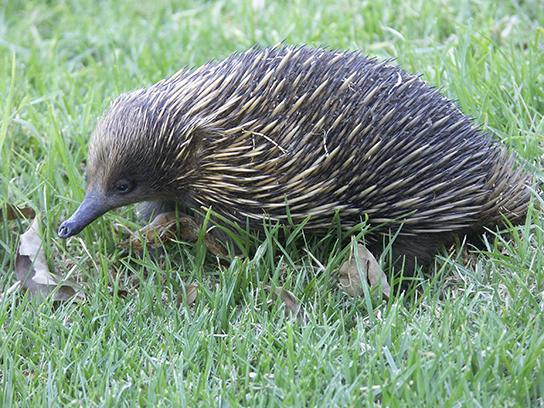 Marsupials are found primarily in Australia, though the opossum is found in North America. Australian marsupials include the kangaroo, koala, bandicoot, Tasmanian devil ([link]), and several other species. Most species of marsupials possess a pouch in which the very premature young reside after birth, receiving milk and continuing to develop. Marsupials differ from eutherians in that there is a less complex placental connection: The young are born at an extremely early age and latch onto the nipple within the pouch.

The Tasmanian devil is one of several marsupials native to Australia. (credit: Wayne McLean) 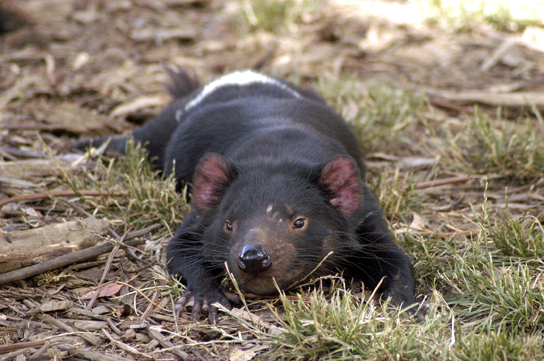 Eutherians are the most widespread of the mammals, occurring throughout the world. There are 18 to 20 orders of placental mammals. Some examples are Insectivora, the insect eaters; Edentata, the toothless anteaters; Rodentia, the rodents; Cetacea, the aquatic mammals including whales; Carnivora, carnivorous mammals including dogs, cats, and bears; and Primates, which includes humans. Eutherian mammals are sometimes called placental mammals because all species possess a complex placenta that connects a fetus to the mother, allowing for gas, fluid, and nutrient exchange. While other mammals possess a less complex placenta or briefly have a placenta, all eutherians possess a complex placenta during gestation.

Mammals in general are vertebrates that possess hair and mammary glands. The mammalian integument includes various secretory glands, including sebaceous glands, eccrine glands, apocrine glands, and mammary glands. Mammals are synapsids, meaning that they have a single opening in the skull. A key characteristic of synapsids is endothermy rather than the ectothermy seen in other vertebrates. Mammals probably evolved from therapsids in the late Triassic period, as the earliest known mammal fossils are from the early Jurassic period. There are three groups of mammals living today: monotremes, marsupials, and eutherians. Monotremes are unique among mammals as they lay eggs, rather than giving birth to young. Eutherian mammals are sometimes called placental mammals, because all species possess a complex placenta that connects a fetus to the mother, allowing for gas, fluid, and nutrient exchange.

The lower jaw of mammals consists of only one bone, the dentary. The dentary bone joins the skull at the squamosal bone. Mammals have three bones of the middle ear. The adductor muscle that closes the jaw is composed of two muscles in mammals. Most mammals have heterodont teeth.

Describe three characteristics of the mammalian brain that differ from other vertebrates.

In some mammals, the cerebral cortex is highly folded, allowing for greater surface area than a smooth cortex. The optic lobes are divided into two parts in mammals. Eutherian mammals also possess a specialized structure that links the two cerebral hemispheres, called the corpus callosum.

dentary
single bone that comprises the lower jaw of mammals

eutherian mammal
mammal that possesses a complex placenta, which connects a fetus to the mother; sometimes called placental mammals

mammary gland
in female mammals, a gland that produces milk for newborns

marsupial
one of the groups of mammals that includes the kangaroo, koala, bandicoot, Tasmanian devil, and several other species; young develop within a pouch

Tachyglossidae
clade that includes the echidna or spiny anteater

Mammals by OpenStaxCollege is licensed under a Creative Commons Attribution 4.0 International License, except where otherwise noted.