You have just read about two pathways in glucose catabolism—glycolysis and the citric acid cycle—that generate ATP. Most of the ATP generated during the aerobic catabolism of glucose, however, is not generated directly from these pathways. Rather, it is derived from a process that begins with moving electrons through a series of electron transporters that undergo redox reactions. This causes hydrogen ions to accumulate within the matrix space. Therefore, a concentration gradient forms in which hydrogen ions diffuse out of the matrix space by passing through ATP synthase. The current of hydrogen ions powers the catalytic action of ATP synthase, which phosphorylates ADP, producing ATP.

The electron transport chain ([link]) is the last component of aerobic respiration and is the only part of glucose metabolism that uses atmospheric oxygen. Oxygen continuously diffuses into plants; in animals, it enters the body through the respiratory system. Electron transport is a series of redox reactions that resemble a relay race or bucket brigade in that electrons are passed rapidly from one component to the next, to the endpoint of the chain where the electrons reduce molecular oxygen, producing water. There are four complexes composed of proteins, labeled I through IV in [link], and the aggregation of these four complexes, together with associated mobile, accessory electron carriers, is called the electron transport chain. The electron transport chain is present in multiple copies in the inner mitochondrial membrane of eukaryotes and the plasma membrane of prokaryotes. 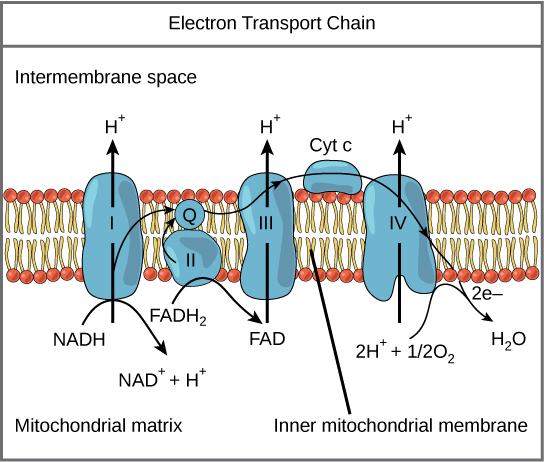 To start, two electrons are carried to the first complex aboard NADH. This complex, labeled I, is composed of flavin mononucleotide (FMN) and an iron-sulfur (Fe-S)-containing protein. FMN, which is derived from vitamin B2, also called riboflavin, is one of several prosthetic groups or co-factors in the electron transport chain. A prosthetic group is a non-protein molecule required for the activity of a protein. Prosthetic groups are organic or inorganic, non-peptide molecules bound to a protein that facilitate its function; prosthetic groups include co-enzymes, which are the prosthetic groups of enzymes. The enzyme in complex I is NADH dehydrogenase and is a very large protein, containing 45 amino acid chains. Complex I can pump four hydrogen ions across the membrane from the matrix into the intermembrane space, and it is in this way that the hydrogen ion gradient is established and maintained between the two compartments separated by the inner mitochondrial membrane.

Complex II directly receives FADH2, which does not pass through complex I. The compound connecting the first and second complexes to the third is ubiquinone (Q). The Q molecule is lipid soluble and freely moves through the hydrophobic core of the membrane. Once it is reduced, (QH2), ubiquinone delivers its electrons to the next complex in the electron transport chain. Q receives the electrons derived from NADH from complex I and the electrons derived from FADH2 from complex II, including succinate dehydrogenase. This enzyme and FADH2 form a small complex that delivers electrons directly to the electron transport chain, bypassing the first complex. Since these electrons bypass and thus do not energize the proton pump in the first complex, fewer ATP molecules are made from the FADH2 electrons. The number of ATP molecules ultimately obtained is directly proportional to the number of protons pumped across the inner mitochondrial membrane.

The third complex is composed of cytochrome b, another Fe-S protein, Rieske center (2Fe-2S center), and cytochrome c proteins; this complex is also called cytochrome oxidoreductase. Cytochrome proteins have a prosthetic group of heme. The heme molecule is similar to the heme in hemoglobin, but it carries electrons, not oxygen. As a result, the iron ion at its core is reduced and oxidized as it passes the electrons, fluctuating between different oxidation states: Fe++ (reduced) and Fe+++ (oxidized). The heme molecules in the cytochromes have slightly different characteristics due to the effects of the different proteins binding them, giving slightly different characteristics to each complex. Complex III pumps protons through the membrane and passes its electrons to cytochrome c for transport to the fourth complex of proteins and enzymes (cytochrome c is the acceptor of electrons from Q; however, whereas Q carries pairs of electrons, cytochrome c can accept only one at a time).

The fourth complex is composed of cytochrome proteins c, a, and a3. This complex contains two heme groups (one in each of the two cytochromes, a, and a3) and three copper ions (a pair of CuA and one CuB in cytochrome a3). The cytochromes hold an oxygen molecule very tightly between the iron and copper ions until the oxygen is completely reduced. The reduced oxygen then picks up two hydrogen ions from the surrounding medium to make water (H2O). The removal of the hydrogen ions from the system contributes to the ion gradient used in the process of chemiosmosis.

If the membrane were open to diffusion by the hydrogen ions, the ions would tend to diffuse back across into the matrix, driven by their electrochemical gradient. Recall that many ions cannot diffuse through the nonpolar regions of phospholipid membranes without the aid of ion channels. Similarly, hydrogen ions in the matrix space can only pass through the inner mitochondrial membrane through an integral membrane protein called ATP synthase ([link]). This complex protein acts as a tiny generator, turned by the force of the hydrogen ions diffusing through it, down their electrochemical gradient. The turning of parts of this molecular machine facilitates the addition of a phosphate to ADP, forming ATP, using the potential energy of the hydrogen ion gradient. 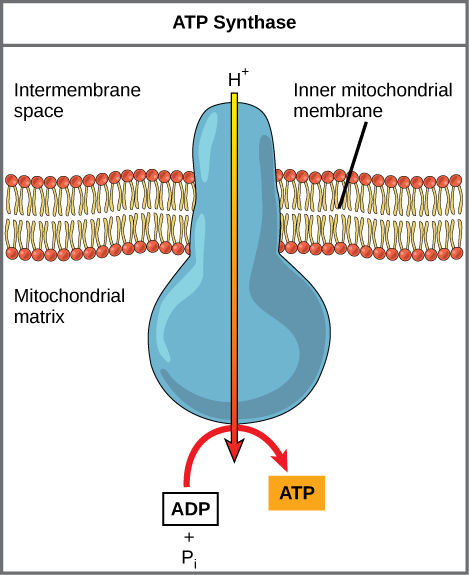 <!– [link]Figure 07_04_02[/link]After DNP poisoning, the electron transport chain can no longer form a proton gradient, and ATP synthase can no longer make ATP. DNP is an effective diet drug because it uncouples ATP synthesis; in other words, after taking it, a person obtains less energy out of the food he or she eats. Interestingly, one of the worst side effects of this drug is hyperthermia, or overheating of the body. Since ATP cannot be formed, the energy from electron transport is lost as heat. –>

Chemiosmosis ([link]) is used to generate 90 percent of the ATP made during aerobic glucose catabolism; it is also the method used in the light reactions of photosynthesis to harness the energy of sunlight in the process of photophosphorylation. Recall that the production of ATP using the process of chemiosmosis in mitochondria is called oxidative phosphorylation. The overall result of these reactions is the production of ATP from the energy of the electrons removed from hydrogen atoms. These atoms were originally part of a glucose molecule. At the end of the pathway, the electrons are used to reduce an oxygen molecule to oxygen ions. The extra electrons on the oxygen attract hydrogen ions (protons) from the surrounding medium, and water is formed.

Art Connection
In oxidative phosphorylation, the pH gradient formed by the electron transport chain is used by ATP synthase to form ATP. 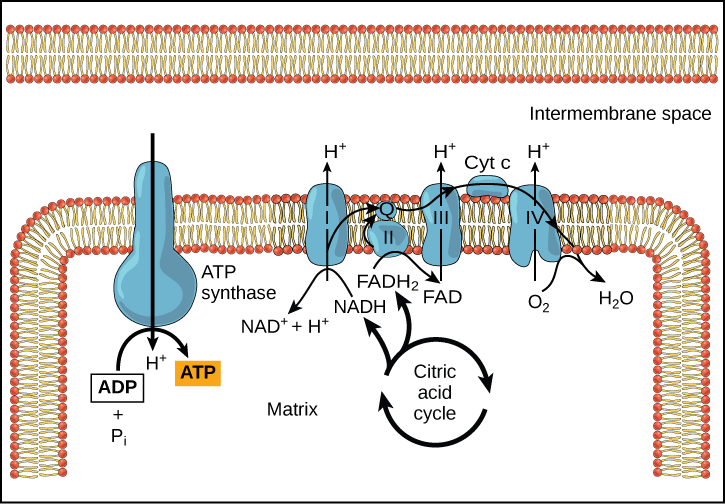 Cyanide inhibits cytochrome c oxidase, a component of the electron transport chain. If cyanide poisoning occurs, would you expect the pH of the intermembrane space to increase or decrease? What effect would cyanide have on ATP synthesis?

The number of ATP molecules generated from the catabolism of glucose varies. For example, the number of hydrogen ions that the electron transport chain complexes can pump through the membrane varies between species. Another source of variance stems from the shuttle of electrons across the membranes of the mitochondria. (The NADH generated from glycolysis cannot easily enter mitochondria.) Thus, electrons are picked up on the inside of mitochondria by either NAD+ or FAD+. As you have learned earlier, these FAD+ molecules can transport fewer ions; consequently, fewer ATP molecules are generated when FAD+ acts as a carrier. NAD+ is used as the electron transporter in the liver and FAD+ acts in the brain.

Another factor that affects the yield of ATP molecules generated from glucose is the fact that intermediate compounds in these pathways are used for other purposes. Glucose catabolism connects with the pathways that build or break down all other biochemical compounds in cells, and the result is somewhat messier than the ideal situations described thus far. For example, sugars other than glucose are fed into the glycolytic pathway for energy extraction. Moreover, the five-carbon sugars that form nucleic acids are made from intermediates in glycolysis. Certain nonessential amino acids can be made from intermediates of both glycolysis and the citric acid cycle. Lipids, such as cholesterol and triglycerides, are also made from intermediates in these pathways, and both amino acids and triglycerides are broken down for energy through these pathways. Overall, in living systems, these pathways of glucose catabolism extract about 34 percent of the energy contained in glucose.

[link] After DNP poisoning, the electron transport chain can no longer form a proton gradient, and ATP synthase can no longer make ATP. DNP is an effective diet drug because it uncouples ATP synthesis; in other words, after taking it, a person obtains less energy out of the food he or she eats. Interestingly, one of the worst side effects of this drug is hyperthermia, or overheating of the body. Since ATP cannot be formed, the energy from electron transport is lost as heat.

[link] Cyanide inhibits cytochrome c oxidase, a component of the electron transport chain. If cyanide poisoning occurs, would you expect the pH of the intermembrane space to increase or decrease? What effect would cyanide have on ATP synthesis?

What compound receives electrons from NADH?

How do the roles of ubiquinone and cytochrome c differ from the other components of the electron transport chain?

Q and cytochrome c are transport molecules. Their function does not result directly in ATP synthesis in that they are not pumps. Moreover, Q is the only component of the electron transport chain that is not a protein. Ubiquinone and cytochrome c are small, mobile, electron carriers, whereas the other components of the electron transport chain are large complexes anchored in the inner mitochondrial membrane.

What accounts for the different number of ATP molecules that are formed through cellular respiration?

Few tissues except muscle produce the maximum possible amount of ATP from nutrients. The intermediates are used to produce needed amino acids, fatty acids, cholesterol, and sugars for nucleic acids. When NADH is transported from the cytoplasm to the mitochondria, an active transport mechanism is used, which decreases the amount of ATP that can be made. The electron transport chain differs in composition between species, so different organisms will make different amounts of ATP using their electron transport chains.

ATP synthase
(also, F1F0 ATP synthase) membrane-embedded protein complex that adds a phosphate to ADP with energy from protons diffusing through it

prosthetic group
(also, prosthetic cofactor) molecule bound to a protein that facilitates the function of the protein

Oxidative Phosphorylation by OpenStaxCollege is licensed under a Creative Commons Attribution 4.0 International License, except where otherwise noted.