Sexual reproduction was an early evolutionary innovation after the appearance of eukaryotic cells. It appears to have been very successful because most eukaryotes are able to reproduce sexually, and in many animals, it is the only mode of reproduction. And yet, scientists recognize some real disadvantages to sexual reproduction. On the surface, creating offspring that are genetic clones of the parent appears to be a better system. If the parent organism is successfully occupying a habitat, offspring with the same traits would be similarly successful. There is also the obvious benefit to an organism that can produce offspring whenever circumstances are favorable by asexual budding, fragmentation, or asexual eggs. These methods of reproduction do not require another organism of the opposite sex. Indeed, some organisms that lead a solitary lifestyle have retained the ability to reproduce asexually. In addition, in asexual populations, every individual is capable of reproduction. In sexual populations, the males are not producing the offspring themselves, so in theory an asexual population could grow twice as fast.

However, multicellular organisms that exclusively depend on asexual reproduction are exceedingly rare. Why is sexuality (and meiosis) so common? This is one of the important unanswered questions in biology and has been the focus of much research beginning in the latter half of the twentieth century. There are several possible explanations, one of which is that the variation that sexual reproduction creates among offspring is very important to the survival and reproduction of the population. Thus, on average, a sexually reproducing population will leave more descendants than an otherwise similar asexually reproducing population. The only source of variation in asexual organisms is mutation. This is the ultimate source of variation in sexual organisms, but in addition, those different mutations are continually reshuffled from one generation to the next when different parents combine their unique genomes and the genes are mixed into different combinations by crossovers during prophase I and random assortment at metaphase I.

The Red Queen HypothesisIt is not in dispute that sexual reproduction provides evolutionary advantages to organisms that employ this mechanism to produce offspring. But why, even in the face of fairly stable conditions, does sexual reproduction persist when it is more difficult and costly for individual organisms? Variation is the outcome of sexual reproduction, but why are ongoing variations necessary? Enter the Red Queen hypothesis, first proposed by Leigh Van Valen in 1973.1 The concept was named in reference to the Red Queen’s race in Lewis Carroll’s book, Through the Looking-Glass.

All species co-evolve with other organisms; for example predators evolve with their prey, and parasites evolve with their hosts. Each tiny advantage gained by favorable variation gives a species an edge over close competitors, predators, parasites, or even prey. The only method that will allow a co-evolving species to maintain its own share of the resources is to also continually improve its fitness. As one species gains an advantage, this increases selection on the other species; they must also develop an advantage or they will be outcompeted. No single species progresses too far ahead because genetic variation among the progeny of sexual reproduction provides all species with a mechanism to improve rapidly. Species that cannot keep up become extinct. The Red Queen’s catchphrase was, “It takes all the running you can do to stay in the same place.” This is an apt description of co-evolution between competing species.

Nearly all animals employ a diploid-dominant life-cycle strategy in which the only haploid cells produced by the organism are the gametes. Early in the development of the embryo, specialized diploid cells, called germ cells, are produced within the gonads, such as the testes and ovaries. Germ cells are capable of mitosis to perpetuate the cell line and meiosis to produce gametes. Once the haploid gametes are formed, they lose the ability to divide again. There is no multicellular haploid life stage. Fertilization occurs with the fusion of two gametes, usually from different individuals, restoring the diploid state ([link]).

In animals, sexually reproducing adults form haploid gametes from diploid germ cells. Fusion of the gametes gives rise to a fertilized egg cell, or zygote. The zygote will undergo multiple rounds of mitosis to produce a multicellular offspring. The germ cells are generated early in the development of the zygote. 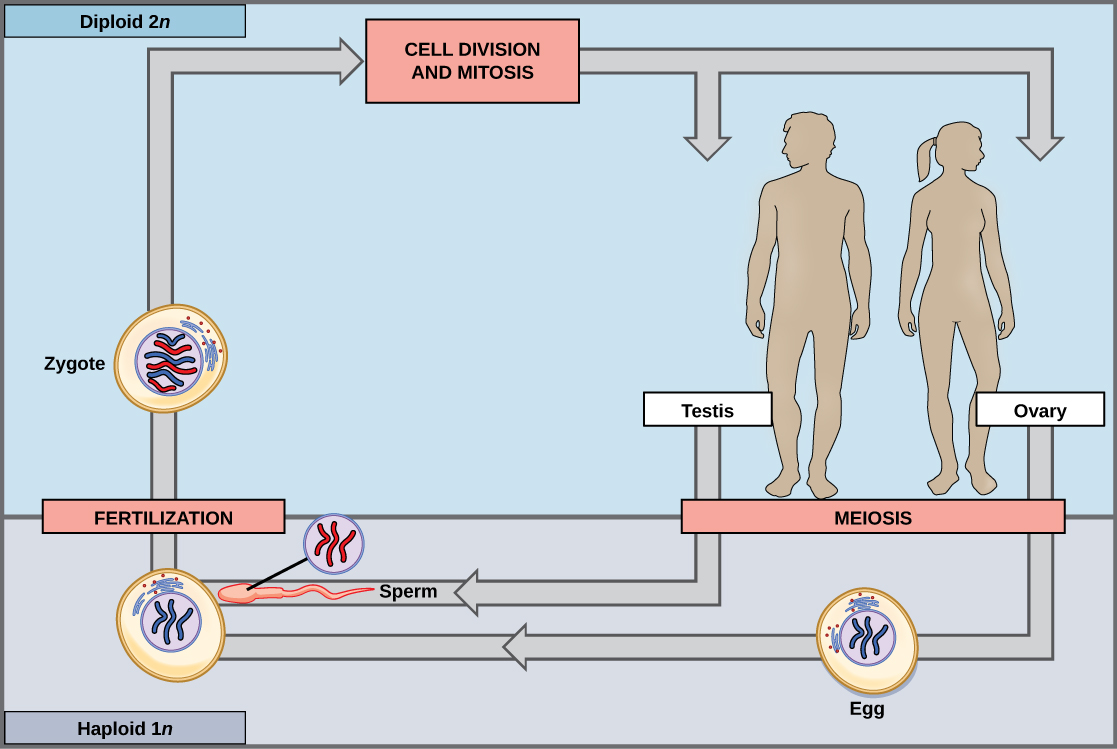 Most fungi and algae employ a life-cycle type in which the “body” of the organism—the ecologically important part of the life cycle—is haploid. The haploid cells that make up the tissues of the dominant multicellular stage are formed by mitosis. During sexual reproduction, specialized haploid cells from two individuals, designated the (+) and (−) mating types, join to form a diploid zygote. The zygote immediately undergoes meiosis to form four haploid cells called spores. Although haploid like the “parents,” these spores contain a new genetic combination from two parents. The spores can remain dormant for various time periods. Eventually, when conditions are conducive, the spores form multicellular haploid structures by many rounds of mitosis ([link]). 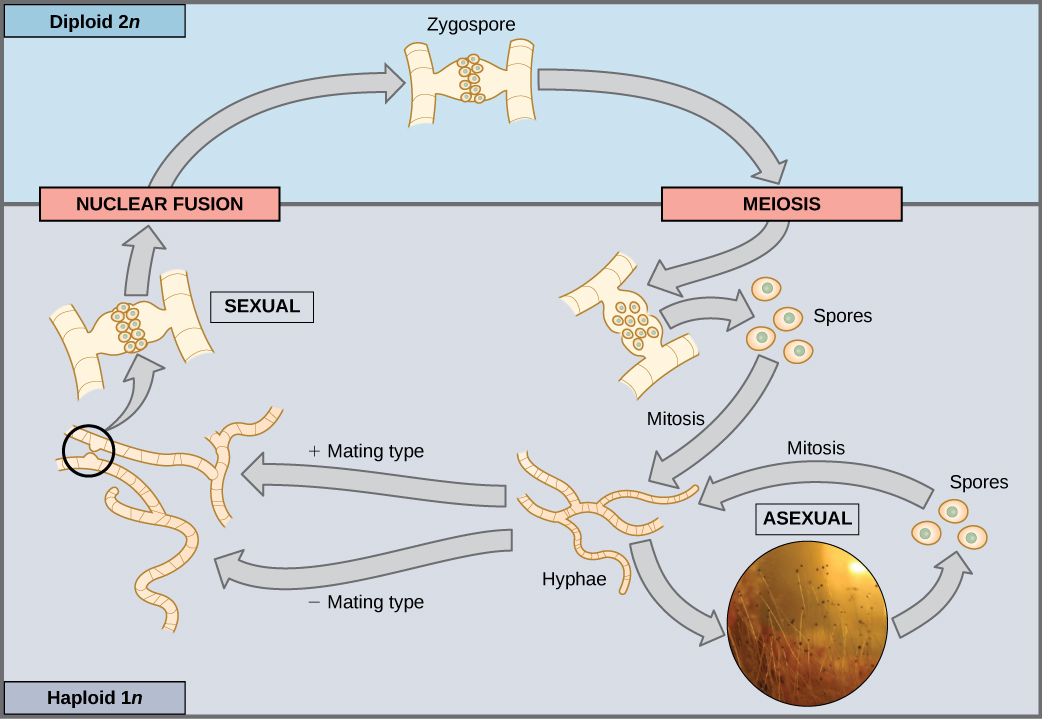 If a mutation occurs so that a fungus is no longer able to produce a minus mating type, will it still be able to reproduce?

The third life-cycle type, employed by some algae and all plants, is a blend of the haploid-dominant and diploid-dominant extremes. Species with alternation of generations have both haploid and diploid multicellular organisms as part of their life cycle. The haploid multicellular plants are called gametophytes, because they produce gametes from specialized cells. Meiosis is not directly involved in the production of gametes in this case, because the organism that produces the gametes is already a haploid. Fertilization between the gametes forms a diploid zygote. The zygote will undergo many rounds of mitosis and give rise to a diploid multicellular plant called a sporophyte. Specialized cells of the sporophyte will undergo meiosis and produce haploid spores. The spores will subsequently develop into the gametophytes ([link]). 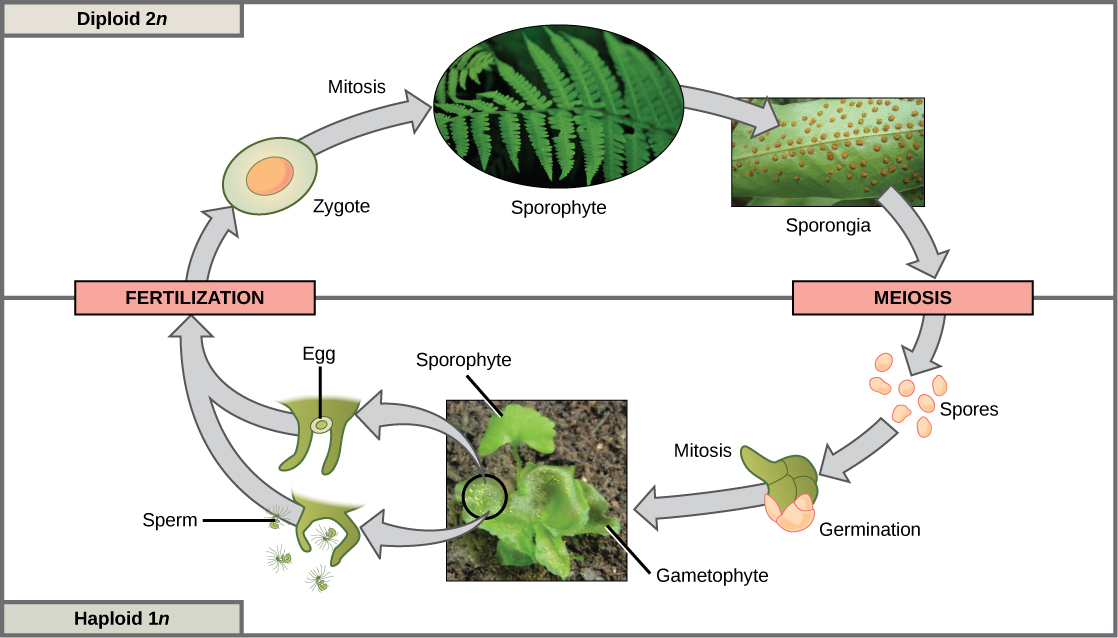 Sexual reproduction takes many forms in multicellular organisms. However, at some point in each type of life cycle, meiosis produces haploid cells that will fuse with the haploid cell of another organism. The mechanisms of variation—crossover, random assortment of homologous chromosomes, and random fertilization—are present in all versions of sexual reproduction. The fact that nearly every multicellular organism on Earth employs sexual reproduction is strong evidence for the benefits of producing offspring with unique gene combinations, though there are other possible benefits as well.

Nearly all eukaryotes undergo sexual reproduction. The variation introduced into the reproductive cells by meiosis appears to be one of the advantages of sexual reproduction that has made it so successful. Meiosis and fertilization alternate in sexual life cycles. The process of meiosis produces unique reproductive cells called gametes, which have half the number of chromosomes as the parent cell. Fertilization, the fusion of haploid gametes from two individuals, restores the diploid condition. Thus, sexually reproducing organisms alternate between haploid and diploid stages. However, the ways in which reproductive cells are produced and the timing between meiosis and fertilization vary greatly. There are three main categories of life cycles: diploid-dominant, demonstrated by most animals; haploid-dominant, demonstrated by all fungi and some algae; and the alternation of generations, demonstrated by plants and some algae.

[link] If a mutation occurs so that a fungus is no longer able to produce a minus mating type, will it still be able to reproduce?

[link] Yes, it will be able to reproduce asexually.

Which type of life cycle has both a haploid and diploid multicellular stage?

A diploid, multicellular life-cycle stage that gives rise to haploid cells by meiosis is called a ________.

List and briefly describe the three processes that lead to variation in offspring with the same parents.

Compare the three main types of life cycles in multicellular organisms and give an example of an organism that employs each.

germ cells
specialized cell line that produces gametes, such as eggs or sperm

Sexual Reproduction by OpenStaxCollege is licensed under a Creative Commons Attribution 4.0 International License, except where otherwise noted.