The removal of an electron from a molecule, oxidizing it, results in a decrease in potential energy in the oxidized compound. The electron (sometimes as part of a hydrogen atom), does not remain unbonded, however, in the cytoplasm of a cell. Rather, the electron is shifted to a second compound, reducing the second compound. The shift of an electron from one compound to another removes some potential energy from the first compound (the oxidized compound) and increases the potential energy of the second compound (the reduced compound). The transfer of electrons between molecules is important because most of the energy stored in atoms and used to fuel cell functions is in the form of high-energy electrons. The transfer of energy in the form of electrons allows the cell to transfer and use energy in an incremental fashion—in small packages rather than in a single, destructive burst. This chapter focuses on the extraction of energy from food; you will see that as you track the path of the transfers, you are tracking the path of electrons moving through metabolic pathways.

In living systems, a small class of compounds functions as electron shuttles: They bind and carry high-energy electrons between compounds in pathways. The principal electron carriers we will consider are derived from the B vitamin group and are derivatives of nucleotides. These compounds can be easily reduced (that is, they accept electrons) or oxidized (they lose electrons). Nicotinamide adenine dinucleotide (NAD) ([link]) is derived from vitamin B3, niacin. NAD+ is the oxidized form of the molecule; NADH is the reduced form of the molecule after it has accepted two electrons and a proton (which together are the equivalent of a hydrogen atom with an extra electron).

NAD+ can accept electrons from an organic molecule according to the general equation:

When electrons are added to a compound, they are reduced. A compound that reduces another is called a reducing agent. In the above equation, RH is a reducing agent, and NAD+ is reduced to NADH. When electrons are removed from compound, it oxidized. A compound that oxidizes another is called an oxidizing agent. In the above equation, NAD+ is an oxidizing agent, and RH is oxidized to R.

Similarly, flavin adenine dinucleotide (FAD+) is derived from vitamin B2, also called riboflavin. Its reduced form is FADH2. A second variation of NAD, NADP, contains an extra phosphate group. Both NAD+ and FAD+ are extensively used in energy extraction from sugars, and NADP plays an important role in anabolic reactions and photosynthesis.

The oxidized form of the electron carrier (NAD+) is shown on the left and the reduced form (NADH) is shown on the right. The nitrogenous base in NADH has one more hydrogen ion and two more electrons than in NAD+. 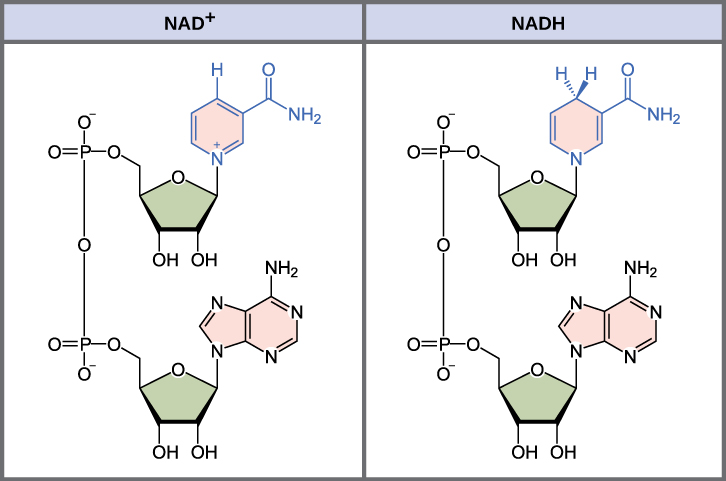 A living cell cannot store significant amounts of free energy. Excess free energy would result in an increase of heat in the cell, which would result in excessive thermal motion that could damage and then destroy the cell. Rather, a cell must be able to handle that energy in a way that enables the cell to store energy safely and release it for use only as needed. Living cells accomplish this by using the compound adenosine triphosphate (ATP). ATP is often called the “energy currency” of the cell, and, like currency, this versatile compound can be used to fill any energy need of the cell. How? It functions similarly to a rechargeable battery.

When ATP is broken down, usually by the removal of its terminal phosphate group, energy is released. The energy is used to do work by the cell, usually by the released phosphate binding to another molecule, activating it. For example, in the mechanical work of muscle contraction, ATP supplies the energy to move the contractile muscle proteins. Recall the active transport work of the sodium-potassium pump in cell membranes. ATP alters the structure of the integral protein that functions as the pump, changing its affinity for sodium and potassium. In this way, the cell performs work, pumping ions against their electrochemical gradients. 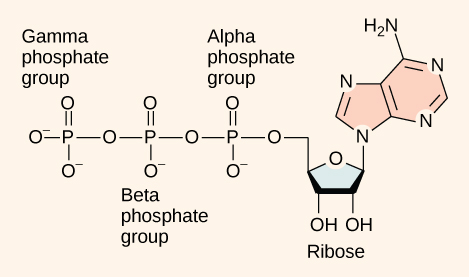 The addition of a phosphate group to a molecule requires energy. Phosphate groups are negatively charged and thus repel one another when they are arranged in series, as they are in ADP and ATP. This repulsion makes the ADP and ATP molecules inherently unstable. The release of one or two phosphate groups from ATP, a process called dephosphorylation, releases energy.

Hydrolysis is the process of breaking complex macromolecules apart. During hydrolysis, water is split, or lysed, and the resulting hydrogen atom (H+) and a hydroxyl group (OH–) are added to the larger molecule. The hydrolysis of ATP produces ADP, together with an inorganic phosphate ion (Pi), and the release of free energy. To carry out life processes, ATP is continuously broken down into ADP, and like a rechargeable battery, ADP is continuously regenerated into ATP by the reattachment of a third phosphate group. Water, which was broken down into its hydrogen atom and hydroxyl group during ATP hydrolysis, is regenerated when a third phosphate is added to the ADP molecule, reforming ATP.

Obviously, energy must be infused into the system to regenerate ATP. Where does this energy come from? In nearly every living thing on earth, the energy comes from the metabolism of glucose. In this way, ATP is a direct link between the limited set of exergonic pathways of glucose catabolism and the multitude of endergonic pathways that power living cells.

When the intermediate complex breaks apart, the energy is used to modify the substrate and convert it into a product of the reaction. The ADP molecule and a free phosphate ion are released into the medium and are available for recycling through cell metabolism.

ATP is generated through two mechanisms during the breakdown of glucose. A few ATP molecules are generated (that is, regenerated from ADP) as a direct result of the chemical reactions that occur in the catabolic pathways. A phosphate group is removed from an intermediate reactant in the pathway, and the free energy of the reaction is used to add the third phosphate to an available ADP molecule, producing ATP ([link]). This very direct method of phosphorylation is called substrate-level phosphorylation.

In phosphorylation reactions, the gamma phosphate of ATP is attached to a protein.

Most of the ATP generated during glucose catabolism, however, is derived from a much more complex process, chemiosmosis, which takes place in mitochondria ([link]) within a eukaryotic cell or the plasma membrane of a prokaryotic cell. Chemiosmosis, a process of ATP production in cellular metabolism, is used to generate 90 percent of the ATP made during glucose catabolism and is also the method used in the light reactions of photosynthesis to harness the energy of sunlight. The production of ATP using the process of chemiosmosis is called oxidative phosphorylation because of the involvement of oxygen in the process.

In eukaryotes, oxidative phosphorylation takes place in mitochondria. In prokaryotes, this process takes place in the plasma membrane. (Credit: modification of work by Mariana Ruiz Villareal) 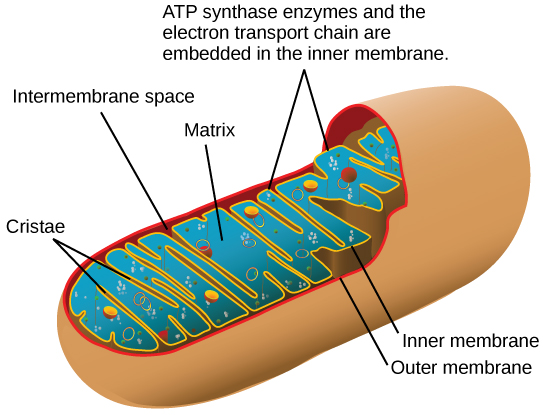 What happens when the critical reactions of cellular respiration do not proceed correctly? Mitochondrial diseases are genetic disorders of metabolism. Mitochondrial disorders can arise from mutations in nuclear or mitochondrial DNA, and they result in the production of less energy than is normal in body cells. In type 2 diabetes, for instance, the oxidation efficiency of NADH is reduced, impacting oxidative phosphorylation but not the other steps of respiration. Symptoms of mitochondrial diseases can include muscle weakness, lack of coordination, stroke-like episodes, and loss of vision and hearing. Most affected people are diagnosed in childhood, although there are some adult-onset diseases. Identifying and treating mitochondrial disorders is a specialized medical field. The educational preparation for this profession requires a college education, followed by medical school with a specialization in medical genetics. Medical geneticists can be board certified by the American Board of Medical Genetics and go on to become associated with professional organizations devoted to the study of mitochondrial diseases, such as the Mitochondrial Medicine Society and the Society for Inherited Metabolic Disease.

ATP functions as the energy currency for cells. It allows the cell to store energy briefly and transport it within the cell to support endergonic chemical reactions. The structure of ATP is that of an RNA nucleotide with three phosphates attached. As ATP is used for energy, a phosphate group or two are detached, and either ADP or AMP is produced. Energy derived from glucose catabolism is used to convert ADP into ATP. When ATP is used in a reaction, the third phosphate is temporarily attached to a substrate in a process called phosphorylation. The two processes of ATP regeneration that are used in conjunction with glucose catabolism are substrate-level phosphorylation and oxidative phosphorylation through the process of chemiosmosis.

ATP provides the cell with a way to handle energy in an efficient manner. The molecule can be charged, stored, and used as needed. Moreover, the energy from hydrolyzing ATP is delivered as a consistent amount. Harvesting energy from the bonds of several different compounds would result in energy deliveries of different quantities.

dephosphorylation
removal of a phosphate group from a molecule

phosphorylation
addition of a high-energy phosphate to a compound, usually a metabolic intermediate, a protein, or ADP

Energy in Living Systems by OpenStaxCollege is licensed under a Creative Commons Attribution 4.0 International License, except where otherwise noted.