If oxygen is available, aerobic respiration will go forward. In eukaryotic cells, the pyruvate molecules produced at the end of glycolysis are transported into mitochondria, which are the sites of cellular respiration. There, pyruvate will be transformed into an acetyl group that will be picked up and activated by a carrier compound called coenzyme A (CoA). The resulting compound is called acetyl CoA. CoA is made from vitamin B5, pantothenic acid. Acetyl CoA can be used in a variety of ways by the cell, but its major function is to deliver the acetyl group derived from pyruvate to the next stage of the pathway in glucose catabolism.

In order for pyruvate, the product of glycolysis, to enter the next pathway, it must undergo several changes. The conversion is a three-step process ([link]).

Step 1. A carboxyl group is removed from pyruvate, releasing a molecule of carbon dioxide into the surrounding medium. The result of this step is a two-carbon hydroxyethyl group bound to the enzyme (pyruvate dehydrogenase). This is the first of the six carbons from the original glucose molecule to be removed. This step proceeds twice (remember: there are two pyruvate molecules produced at the end of glycolsis) for every molecule of glucose metabolized; thus, two of the six carbons will have been removed at the end of both steps.

Step 2. The hydroxyethyl group is oxidized to an acetyl group, and the electrons are picked up by NAD+, forming NADH. The high-energy electrons from NADH will be used later to generate ATP.

Step 3. The enzyme-bound acetyl group is transferred to CoA, producing a molecule of acetyl CoA.

Upon entering the mitochondrial matrix, a multi-enzyme complex converts pyruvate into acetyl CoA. In the process, carbon dioxide is released and one molecule of NADH is formed. 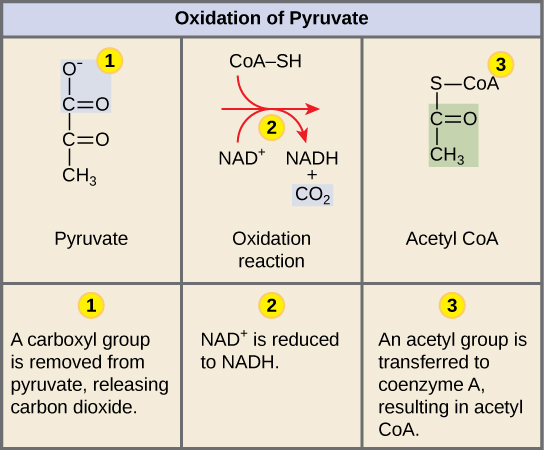 Note that during the second stage of glucose metabolism, whenever a carbon atom is removed, it is bound to two oxygen atoms, producing carbon dioxide, one of the major end products of cellular respiration.

In the presence of oxygen, acetyl CoA delivers its acetyl group to a four-carbon molecule, oxaloacetate, to form citrate, a six-carbon molecule with three carboxyl groups; this pathway will harvest the remainder of the extractable energy from what began as a glucose molecule. This single pathway is called by different names: the citric acid cycle (for the first intermediate formed—citric acid, or citrate—when acetate joins to the oxaloacetate), the TCA cycle (since citric acid or citrate and isocitrate are tricarboxylic acids), and the Krebs cycle, after Hans Krebs, who first identified the steps in the pathway in the 1930s in pigeon flight muscles.

In the citric acid cycle, the acetyl group from acetyl CoA is attached to a four-carbon oxaloacetate molecule to form a six-carbon citrate molecule. Through a series of steps, citrate is oxidized, releasing two carbon dioxide molecules for each acetyl group fed into the cycle. In the process, three NAD+ molecules are reduced to NADH, one FAD molecule is reduced to FADH2, and one ATP or GTP (depending on the cell type) is produced (by substrate-level phosphorylation). Because the final product of the citric acid cycle is also the first reactant, the cycle runs continuously in the presence of sufficient reactants. (credit: modification of work by “Yikrazuul”/Wikimedia Commons) 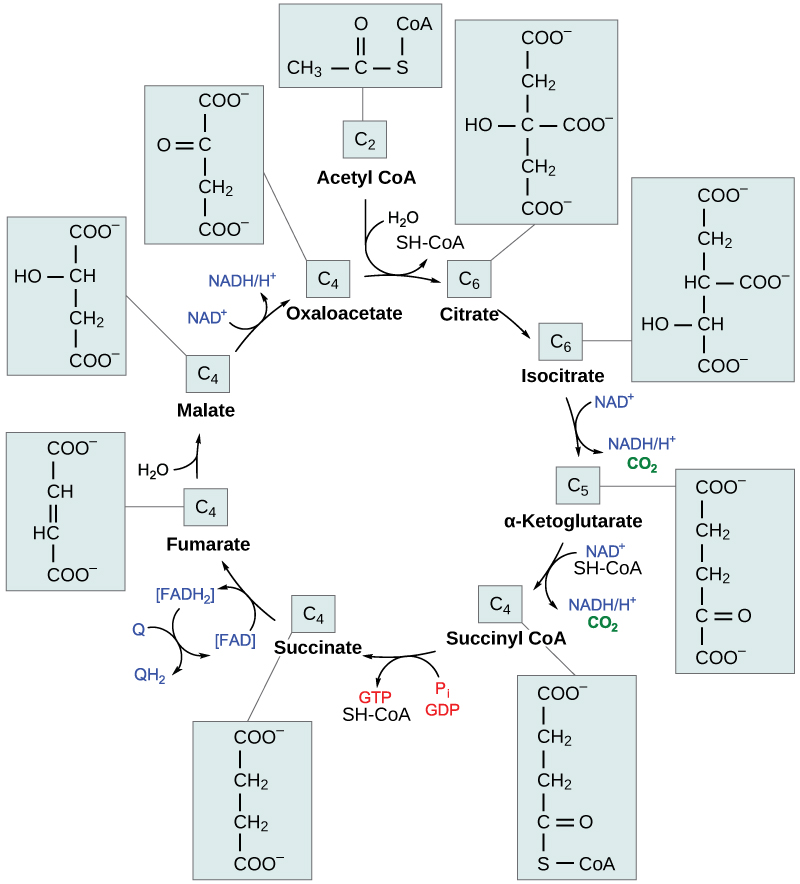 Steps in the Citric Acid Cycle

Step 1. Prior to the start of the first step, a transitional phase occurs during which pyruvic acid is converted to acetyl CoA. Then, the first step of the cycle begins: This is a condensation step, combining the two-carbon acetyl group with a four-carbon oxaloacetate molecule to form a six-carbon molecule of citrate. CoA is bound to a sulfhydryl group (-SH) and diffuses away to eventually combine with another acetyl group. This step is irreversible because it is highly exergonic. The rate of this reaction is controlled by negative feedback and the amount of ATP available. If ATP levels increase, the rate of this reaction decreases. If ATP is in short supply, the rate increases.

Step 2. In step two, citrate loses one water molecule and gains another as citrate is converted into its isomer, isocitrate.

Step 3. In step three, isocitrate is oxidized, producing a five-carbon molecule, α-ketoglutarate, together with a molecule of CO2 and two electrons, which reduce NAD+ to NADH. This step is also regulated by negative feedback from ATP and NADH, and a positive effect of ADP.

Steps 3 and 4. Steps three and four are both oxidation and decarboxylation steps, which release electrons that reduce NAD+ to NADH and release carboxyl groups that form CO2 molecules. α-Ketoglutarate is the product of step three, and a succinyl group is the product of step four. CoA binds the succinyl group to form succinyl CoA. The enzyme that catalyzes step four is regulated by feedback inhibition of ATP, succinyl CoA, and NADH.

Step 5. In step five, a phosphate group is substituted for coenzyme A, and a high-energy bond is formed. This energy is used in substrate-level phosphorylation (during the conversion of the succinyl group to succinate) to form either guanine triphosphate (GTP) or ATP. There are two forms of the enzyme, called isoenzymes, for this step, depending upon the type of animal tissue in which they are found. One form is found in tissues that use large amounts of ATP, such as heart and skeletal muscle. This form produces ATP. The second form of the enzyme is found in tissues that have a high number of anabolic pathways, such as liver. This form produces GTP. GTP is energetically equivalent to ATP; however, its use is more restricted. In particular, protein synthesis primarily uses GTP.

Step 6. Step six is a dehydration process that converts succinate into fumarate. Two hydrogen atoms are transferred to FAD, producing FADH2. The energy contained in the electrons of these atoms is insufficient to reduce NAD+ but adequate to reduce FAD. Unlike NADH, this carrier remains attached to the enzyme and transfers the electrons to the electron transport chain directly. This process is made possible by the localization of the enzyme catalyzing this step inside the inner membrane of the mitochondrion.

Step 7. Water is added to fumarate during step seven, and malate is produced. The last step in the citric acid cycle regenerates oxaloacetate by oxidizing malate. Another molecule of NADH is produced in the process.

Click through each step of the citric acid cycle here.

Products of the Citric Acid Cycle

Two carbon atoms come into the citric acid cycle from each acetyl group, representing four out of the six carbons of one glucose molecule. Two carbon dioxide molecules are released on each turn of the cycle; however, these do not necessarily contain the most recently added carbon atoms. The two acetyl carbon atoms will eventually be released on later turns of the cycle; thus, all six carbon atoms from the original glucose molecule are eventually incorporated into carbon dioxide. Each turn of the cycle forms three NADH molecules and one FADH2 molecule. These carriers will connect with the last portion of aerobic respiration to produce ATP molecules. One GTP or ATP is also made in each cycle. Several of the intermediate compounds in the citric acid cycle can be used in synthesizing non-essential amino acids; therefore, the cycle is amphibolic (both catabolic and anabolic).

In the presence of oxygen, pyruvate is transformed into an acetyl group attached to a carrier molecule of coenzyme A. The resulting acetyl CoA can enter several pathways, but most often, the acetyl group is delivered to the citric acid cycle for further catabolism. During the conversion of pyruvate into the acetyl group, a molecule of carbon dioxide and two high-energy electrons are removed. The carbon dioxide accounts for two (conversion of two pyruvate molecules) of the six carbons of the original glucose molecule. The electrons are picked up by NAD+, and the NADH carries the electrons to a later pathway for ATP production. At this point, the glucose molecule that originally entered cellular respiration has been completely oxidized. Chemical potential energy stored within the glucose molecule has been transferred to electron carriers or has been used to synthesize a few ATPs.

The citric acid cycle is a series of redox and decarboxylation reactions that remove high-energy electrons and carbon dioxide. The electrons temporarily stored in molecules of NADH and FADH2 are used to generate ATP in a subsequent pathway. One molecule of either GTP or ATP is produced by substrate-level phosphorylation on each turn of the cycle. There is no comparison of the cyclic pathway with a linear one.

What is removed from pyruvate during its conversion into an acetyl group?

What do the electrons added to NAD+ do?

How many NADH molecules are produced on each turn of the citric acid cycle?

What is the primary difference between a circular pathway and a linear pathway?

In a circular pathway, the final product of the reaction is also the initial reactant. The pathway is self-perpetuating, as long as any of the intermediates of the pathway are supplied. Circular pathways are able to accommodate multiple entry and exit points, thus being particularly well suited for amphibolic pathways. In a linear pathway, one trip through the pathway completes the pathway, and a second trip would be an independent event.

acetyl CoA
combination of an acetyl group derived from pyruvic acid and coenzyme A, which is made from pantothenic acid (a B-group vitamin)

Oxidation of Pyruvate and the Citric Acid Cycle by OpenStaxCollege is licensed under a Creative Commons Attribution 4.0 International License, except where otherwise noted.